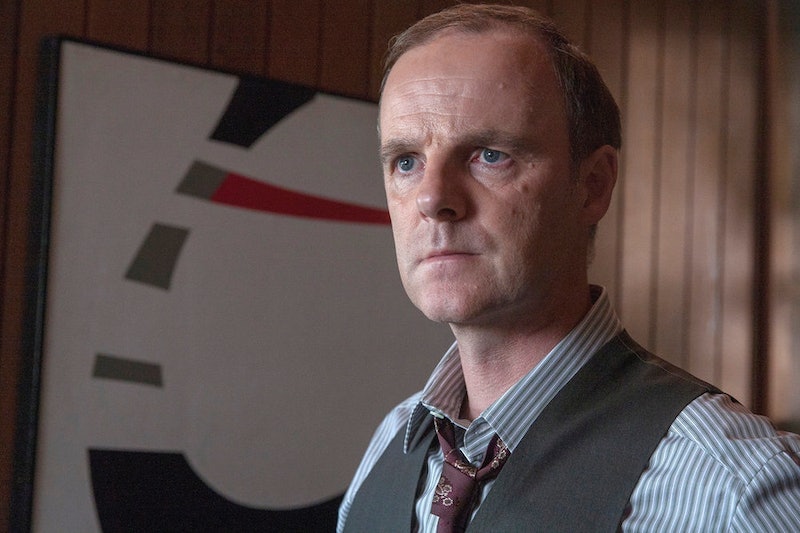 There's no doubt that the main villain of Aquarius is the notorious Charles Manson. He's pied-pipering the town's girls away, he's threatening people, he's assaulting people — he's just not a good dude. Then again, no one had to watch Aquarius to know that Manson was not the best of people. But, if there's a secondary villain in Aquarius , though, it's old Ken Karn (Brían F. O'Byrne). Manson's one-time lawyer is just kind of a shady guy: His daughter has run off with Manson, and he won't let detective Sam Hodiak put his investigation on the record because he's concerned with how it'll look for his high-up governmental bosses. Then he lies to Hodiak about his connection to Manson. And, even Manson is fed up, since I guess Karn wasn't the best defender, and kept dodging Manson's phone calls. But, is Aquarius ' Ken Karn based on a real person, like Manson, or is he made up, like Hodiak?

Like everything Aquarius, the answer is a little of both. There is no one person named Ken Karn whose daughter ran off with the Manson family. Still, Karn's fictional life intersects with real life in a few different ways.

Karn is constantly bragging about his connection to the Los Angeles police commissioner, and real-life politicians like Richard Nixon and Ronald Regan. It's an annoying tic, but it's one the creators of the show find important to ground Aquarius in its time period. "Ken Karn works for Richard Nixon, and Ken Karn is a friend of Ronald Reagan’s, and that’s not going to go away," creator John McNamara told The Hollywood Reporter. "That’s a huge aspect of the show. And the season ender involves political aspirations that are on the line, and you see Manson’s ability to manipulate even the most sophisticated political person."

In the premiere of Aquarius (spoilers/possible triggers ahead), Manson attempts to rape Karn, using a razor to his throat to keep him subdued, until a passing car scares him off. Of all the terrible things in Aquarius, that one came from real life. Manson himself described an incident almost exactly like that in a 2013 interview with Rolling Stone. "I was 17," he told the magazine. "I picked a razor blade up off the shower floor and said, 'If we get caught, I'll tell them I made you do it.' So, he let me do it." Chilling.

Aquarius is not yet up to the famous Tate-LaBianca murders, let alone its trial. Still, Karn was once a lawyer for Manson, and one Manson is dissatisfied with. In the real Tate-LaBianca case, Ronald Hughes was Manson's first lawyer, though he was replaced before the trial began and became the lawyer for one of the other Manson family members, Leslie Van Houten. "In court, [Hughes] ended up strongly defending Van Houten, who was also on trial for murder, and his defense of Van Houten seemed to come at the expense of Manson," The Los Angeles Times writes. "In late November 1970, as the trial neared its end, Hughes disappeared. Four months later, his body turned up wedged in a rocky creek in Ventura County." Karn better watch his back, or he could mysteriously die too.

The lawyer that actually defended Manson in the Tate-LaBianca murder trial was Irving Kanarek and, while he lived until the end of the trial (though not without being threatened), he didn't have the star career that Karn is aiming for. According to The Los Angeles Times, after the trial, he — in his own words — "flipped out," lost his law practice, and was admitted into a psychiatric facility. In 1998 the paper said he was staying in a hotel and "he lives on Social Security and says he can't afford a car." He's still alive today.

But, Aquarius Can Go Wherever It Wants With Karn

Writer McNamara stresses that the series isn't true to life, so he can take his characters anywhere he wants. "It's sort of a work of historical fiction that weaves some things about Manson that are true, some things that are fictional," he told Oh So Gray. "Emma’s character is also fictional." So, presumably, is her dad — and that means anything can happen to him, which should make for a very interesting first season.