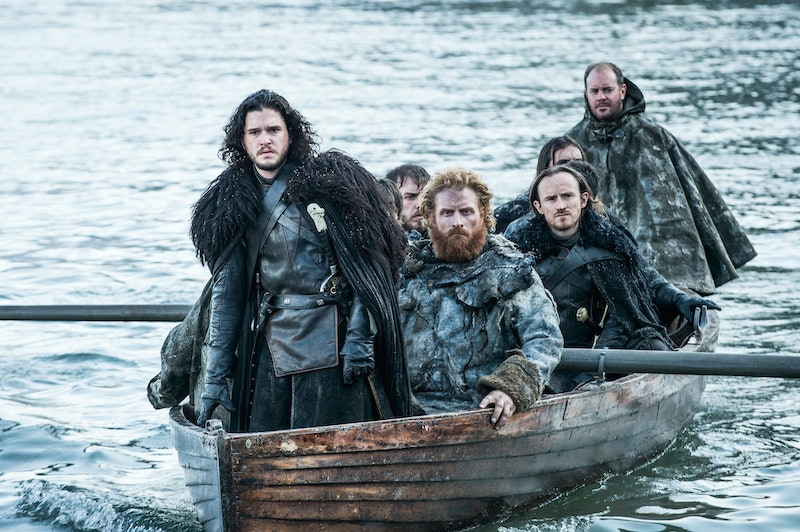 The past few episodes of Game Of Thrones have certainly seen their fair share of game-changing plot twists and marked departures from George R.R. Martin's source material. Audiences have exploded into a frenzy with each new bombshell: Sansa married Ramsay! Jorah got greyscale! Tyrion met Dany! The White Walkers finally did something! But, underneath all these momentous events has been a growing rumble that book readers have been anticipating for years: The sense that the show is headed towards a revelation surrounding Jon Snow's mysterious parentage. By now, most readers take it for granted that the popular fan-theory known as "R+L=J" is practically canon. But, who could Jon's parents be if R+L=J turns out to be wrong? (Possible spoilers ahead!)

For those non-readers still happily oblivious to the ins-and-outs of this fan theory, allow me to explain briefly: R+L=J posits that Jon Snow isn't in fact the bastard son of Eddard Stark and some unknown woman, as is stated multiple times in the books — but, rather, he's the secret son of Rhaegar Targaryen and Lyanna Stark. Robert's rebellion started when Rhaegar purportedly kidnapped Lyanna, who was Robert Baratheon's betrothed... but this theory holds that she wasn't kidnapped, that she in fact fell in love with the handsome prince, eloped with him, and bore his child. In the ensuing war, Rhaegar was killed by Robert during the Battle of the Trident and Lyanna perished mysteriously. (During childbirth, according to R+L=J.) On her deathbed, she allegedly made her brother promise to raise Jon as his own son in order to protect him from Robert's vow to wipe all remaining traces of the Targaryen dynasty off the map.

But, are there any other possibilities for who Jon Snow's parents could be? Over the years, a minority of book readers have taken it upon themselves to disprove R+L=J, citing the theory as "too obvious" or that it renders Daenerys unimportant to the story. (If Jon were truly Rhaegar's son, that would actually place him closer to inheriting the Iron Throne than Dany, Rhaegar's sister.) But, the alternatives are scarce. Given the frequency in the books with which it's noted that Jon has the "Stark look," at least one of his parents must be a Stark, right? Either Lyanna or Eddard.

First, let's assume the former. If Lyanna is Jon's mother, could anyone but Rhaegar be his father? The list of candidates is small. There's Robert Baratheon who, as Lyanna's fiancé, could conceivably have fathered a child with her. But, why would Ned keep that a secret from his best friend? That makes him an unlikely choice. Then there's Arthur Dayne, also known as the Sword of the Morning. As Rhaegar's loyal friend and member of the Kingsguard, he was certainly in close proximity to Lyanna during the time she was with Rhaegar. But, if Lyanna eloped with Rhaegar, would she sleep with his bodyguard? I doubt it. There is always the Mad King himself, Aerys Targaryen, who is rumored to have sired at least one other illegitimate child as a product of rape. But, as far as we know, Aerys and Lyanna were never in the same place at the same time.

(Oh, and Aerys' illegitimate child that I mentioned? According to another fan theory, the Mad King raped Tywin Lannister's wife Joanna, resulting in Tyrion, which would make him another secret half-Lannister: Dany's brother, and Jon's uncle. The dragon has three heads, indeed.)

If there aren't any other viable candidates assuming that Lyanna is Jon's mother, are there any combinations that make sense if we assume that Ned is, in fact, Jon's father? There are two, actually. The first candidate for Jon's mother is mentioned by Catelyn early on in the first book:

Ned would not speak of the mother, not so much as a word, but a castle has no secrets, and Catelyn heard her maids repeating tales they heard from the lips of her husband's soldiers. They whispered of Ser Arthur Dayne, the Sword of the Morning, deadliest of the seven knights of Aerys's Kingsguard, and of how their young lord had slain him in single combat. And they told how afterword Ned had carried Ser Arthur's sword back to the beautiful young sister who awaited him in a castle called Starfall on the shores of the Summer Sea. The Lady Ashara Dayne, tall and fair, with haunting violet eyes. — A Game Of Thrones, Chapter 6

Lady Catelyn assumes that Ned bedded this beautiful stranger and when she asks him about Ashara, he warns her to never ask about Jon again. She doesn't. The second candidate comes a bit later in the first book, and straight from Lord Eddard's mouth this time, in a conversation with the king:

"You told me once. Was it Merryl? You know the one I mean, your bastard's mother?" "Her name was Wylla," Ned replied with cool courtesy, "and I would sooner not speak of her." "Wylla. Yes." The king grinned. "She must have been a rare wench if she could make Lord Eddard Stark forget his honor, even for an hour. You never told me what she looked like..." Ned's mouth tightened in anger. "Nor will I. Leave it be, Robert, for the love you say you bear me. I dishonored myself and I dishonored Catelyn, in the sight of gods and men." — A Game Of Thrones, Chapter 12

In the third book, A Storm Of Swords, it is revealed that Wylla was a wet nurse in the service of House Dayne. We learn this when Arya meets the heir to Starfall, young Edric Dayne, who is serving as squire to Beric Dondarrion of the Brotherhood Without Banners. Edric informs Arya that he and Jon Snow are "milk brothers," since they both nursed from Wylla when they were babes.

Mystery solved, right? Ned went to Starfall to give Ser Arthur's sword to Ashara, bedded the Daynes' wet nurse Wylla, and fathered Jon. It certainly is a plausible story. The only question that remains is: Could all this R+L=J nonsense just be a red herring? Is Jon really just the son of Lord Eddard Stark and Wylla the wet nurse as Ned himself claims?

George R.R. Martin promises that the answer is coming soon. Just don't ask him how soon. "I've not finished The Winds Of Winter yet, so maybe in that book, but, if not then, definitely in the next book," the author told The New York Post last October. So, we'll learn eventually. You know. Whenever he gets around to publishing those books.