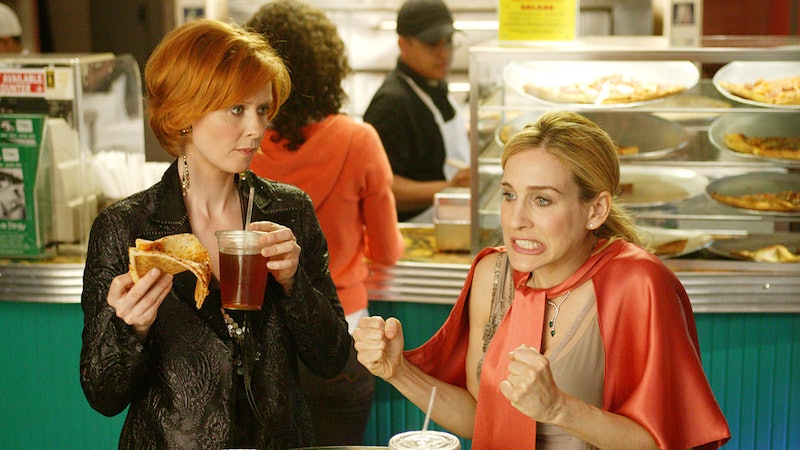 When you're younger, you put up with a lot of senseless bullsh*t from people. Or maybe you're wise beyond your years and you don't. I just know that from personal experience, probably until the age of about 26, I tolerated bad friends because I thought that putting up with poor behavior was an intrinsic part of friendship. But guess what? It's not. Empathy, understanding, and patience are essential to friendship, but giving friends carte blanche to treat you like shit isn't. There should be standards for the way people treat you, whether you've known them your whole life or for five minutes, you're entitled to set those standards for yourself, and walk away when they're not being met.

As I get older, I have zero patience for drama. I'll end friendships with gossipy people who thrive on creating issues with me because I don't have the time. I have plenty of lovely, wonderful people in my life who enjoy the ease of happiness and don't need to feel like they're living in their own soap opera just to feel meaningful. And I have no qualms with that. As a grown up person, I don't have to put up with ongoing nonsense from anyone, even if they're people I call "friends". It doesn't mean I won't give solid counsel to a friend who's having a hard time, or be tolerant of people's quirks. (I like quirks!) It just means that I don't tolerate people who repetitively only bring drama to my life, or who suck me dry for emotional support but give nothing in return. Getting to this point of being comfortable with cutting out toxic people wasn't easy, so here are some reasons to help you realize why, especially as you get older, you should never tolerate bad friends.

1. Because you should have more self-worth than that

Be above letting yourself get walked on. Learn from experiences and become older and wiser and know that you are worth more than poor treatment, and have enough respect for yourself to be able to say no to a friend who treats you badly. Growing up is about getting to know yourself better and knowing what's right and wrong for you and being able to stand up for it.

2. Because it's really okay to do things for your own happiness

It's selfish to ignore a friend who is in anguish because you're getting your nails done. It's not selfish to ignore a drama queen who is sucking all your energy on a daily basis. Learn where the line is between being a nurturing, good friend, and sacrificing your own happiness. Don't give love because you expect something in return, but also don't give love where nothing is given in return. You should serve to make your friends happy and they should do the same for you. If all you're doing is pandering to someone at your own expense, it's okay to put yourself first, and do what you have to do to make yourself happier.

3. Because there are some really great people out there

Would you waste your time eating McDonald's if there was a Shake Shack next door. No, my friend, you would not. Don't look at dropping a toxic friend as a loss—look at it as an opportunity to gain. Imagine putting all the energy you put into a bad friend into a good one, and then do that.

4. Because you don't need a thousand friends

I think when you're young, you're of the opinion that having fifty thousand people you know everywhere you go is important. Dinners where 20 people are invited, parties with 100 people—you know the drill. Everywhere you go, people, people, people. But as you get older, it's about quality over quantity. Sitting down to a drink with one or a small handful of good friends is much more fulfilling than constantly bouncing around between crowds of people. You get to know people better and you're not spreading yourself thin.

5. Because "tiring" isn't a good way to describe a friendship

When you're older, a lot of things are more tiring. Hangovers are easier to get and much harder to recover from. Bills pile up. People expect more from you. You sleep less and work harder. Life is tiring. Don't add tiring relationships to that. Have friendships that are uplifting and fun, because there's enough dragging you down already that your friends should be a source of relief.

6. Because friendship is supposed to be nourishing

Friendships can give you lots of different things. When you're younger, a friend can simply mean having someone that makes you laugh when you're doing shots and dancing all night. As you get older and your priorities change, friendship means having nourishing, reliable people in your life, who will still be there when all the lights come up.

7. Because life is short

If getting older makes you aware of anything, it should be that time passes fast, and life is short as shit. Spend the limited amount of time you have being happy, being with good people, and enjoying as much of life as is possible to enjoy. Don't worry about haters, and get on with being the best you you can be, and surrounding yourself with other people who have the same outlook.