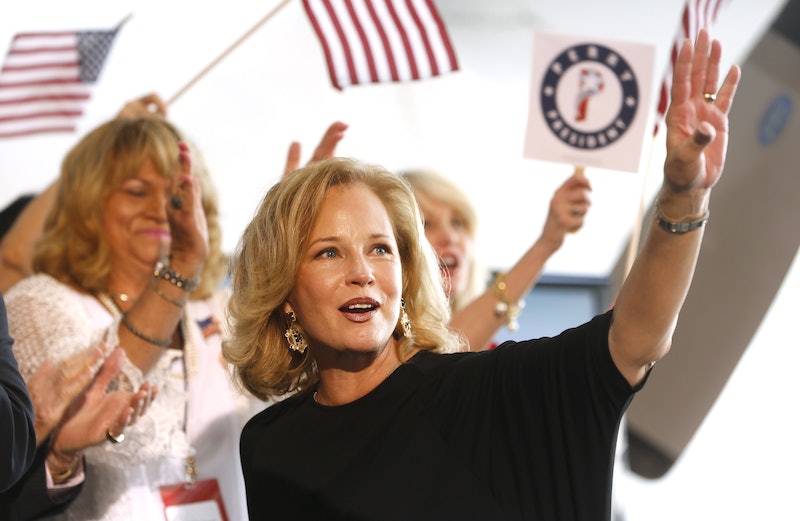 Former Texas Gov. Rick Perry joined the Republican field for 2016 presidential hopefuls on Thursday. He hopes this campaign will be radically different than the last, which some of 2012 strategists have called a disaster, according to CNN. Rick Perry's wife, Anita Thigpen Perry, is one of his greatest supporters, and she actually pushed him to run in 2012. She told CNN she wants "people to really give him a second look," in the 2016 election. But who is Anita Thigpen Perry? Well, she's the woman behind his new hipster-y glasses, according to CNN.

Anita has been depicted as a "small-town Texan" who was initially shy during her husband's first few years as governor, according to the Hill. Anita and Rick met when they were in elementary school, but they didn't start dating until high school. They married in 1982 in Texas.

Anita has said she originally pushed Rick into the 2012 election because she was "disheartened" with the administration "healthcare-wise." In a July interview with the Salem Radio Network, Rick talked about his wife's interest in medicine as the driving force for her political goals, according to the Hill:

Her father is an old country doctor, and she sees the demise of really quality healthcare and being able to take care of people like they need to be taken care of in this country and the innovations that have occurred in medicine.

Anita has a bachelor's degree in nursing from West Texas State University, which is now West Texas A&M University, and a master's degree in nursing from the University of Texas Health Science Center in San Antonio, according to the Hill. She worked as a nurse for 17 years in surgery, pediatrics, intensive care administration, and teaching. She has criticized the federal healthcare law, though her critique didn't help Rick explain why more than a quarter of Texans didn't have health insurance in 2011. (Recent research found that number dropped to 17 percent after implementation of the Affordable Care Act.)

One of Anita's top priorities is increasing immunization rates for children, according to the Hill. She has said that her support for the issue came from years of watching people suffer and die unnecessarily from preventable diseases.

And that isn't the end of her healthcare activism. In a 2013 interview at the Texas Tribune Festival, Anita said she sees abortion "as a woman's right," according to the Washington Post. This might not seem like a huge deal, since she's a woman and all, but it's pretty big given the fact that her husband has been labeled one of the most anti-choice governors in the U.S., according to the Post. Texas is one of only 13 states that bans abortions after 20 weeks, and Rick was responsible for implementing restrictive policies that forced abortion clinics around the state to close, according to Slate.

Anita Perry told the Tribune that though she doesn’t personally agree with abortion, she believes it isn't a choice for her to force on others, according to the Post:

If they want to do that, that is their decision; they have to live with that decision.

Rick later said his wife "misspoke" about her beliefs, according to the Huffington Post.

Anita seems to be a pretty hands-off woman, though, until it comes to her advocacy work. Besides her work with immunizations, she also advocates for breast cancer awareness and Alzheimer's, according to the Hill. She has also been recognized for her work in domestic violence awareness and sexual assault awareness, according to the Texas Woman's University. Her work in the latter has been so frequent that she is now the spokesperson and fundraiser for the Texas Association Against Sexual Assault. She is also the only woman on the 16-member Scott & White Healthcare Foundation Board of Trustees, which oversees the largest not-for-profit integrated healthcare system in Texas.

Anita told CNN that she is ready to support her husband during the 2016 campaign season. She said the debates will "totally change the whole perception" of Rick:

Rick is absolutely the guy that you want to have a beer with, but he's so much more than that. He's prepared now.

More like this
25 Things I've Reduced My Life To, In Addition To WFH In My PJs
By Ginny Hogan
7 Things We Learned From Rebekah Vardy's First Post-WAGatha Christie Interview
By Sam Ramsden
What We Know About Where Caroline Watt Is Now
By Catharina Cheung
We’ve All Had Bad Sex. Nona Willis Aronowitz Is Talking About It.
By Sophia Benoit
Get Even More From Bustle — Sign Up For The Newsletter