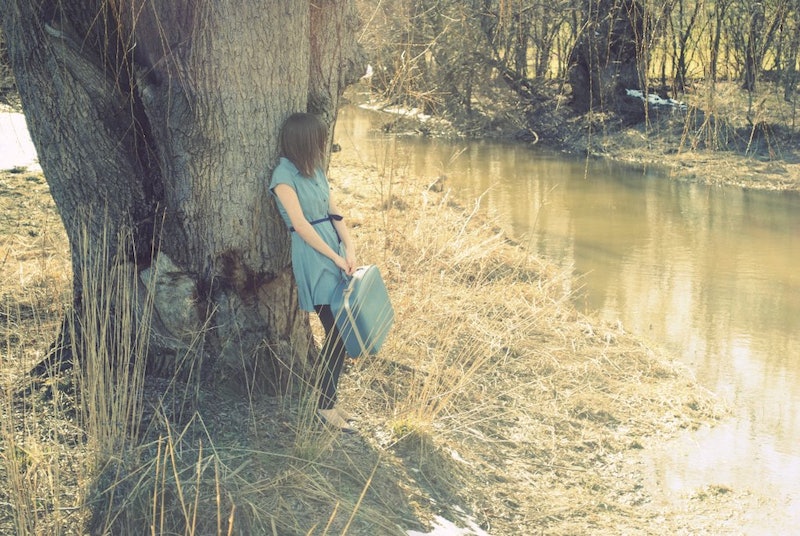 Growing up, I always assumed that I'd move to New York City. Who wouldn't want to live in the glamorous, cultural city that has it all? As a 21-year-old publishing professional and aspiring writer with boundless energy, it was the right fit, and I couldn't have been happier. A fourth floor walk-up with a bathroom ceiling that was about to cave in was a small price to pay to live in my dream city. But flash forward to five years later, and I realized I was in a rut. I felt uninspired at my job, fed up with paying exorbitant rent fees, and I craved a change of scenery. Still, the idea of moving across the country was daunting. As stressful as NYC life can be, it was also my (very noisy and high-pressure) comfort zone. The vast majority of my friends were there and I was always a quick Metro North ride away from my beloved childhood home. While moving across the country was certainly a risk, I realized it was a bigger liability to stay put for another year just because it was comfortable enough. I'd never lived anywhere except the East Coast and I had a feeling that a few years out West would be healthy for me. After putting in plenty of thought and research, I chose to take a leap of faith and move to Seattle. I resigned from my job, pre-leased an apartment, and booked a one-way plane ticket. Although Seattle has had its ups and downs, the move was one of the best decisions I've ever made. If you've been feeling like you're in a rut in your current city, my (somewhat biased) opinion is that a cross country move is a great way to rejuvenate your mind and spirit. Here are eight things you should know before you take the leap:

1. Give The Decision Plenty Of Thought — Then Fully Embrace Your Choice

Taking any risk is like going for a run: if you think about it too much, you'll probably end up saying "nah, not today". I'm not saying the decision to make a huge move should be taken lightly or done impulsively. But once you've done your research and weighed all the pros and cons, go with your gut instinct and commit yourself to making the move happen.

Second-guessing yourself is a waste of time. You're going to have a lot of logistics to deal with and that's way easier to handle when you're super excited about your move. There's never a guarantee that something is going to be as wonderful as you'd hoped and imagined, but follow your instincts and remember that everything is reversible.

When I chose to move to Seattle, I only knew two people in the area — and one of them was an hour ferry ride away from where I was living. This admittedly made me a little nervous because, as much as I value my alone time and looked forward to living in my own apartment, I've always had a close circle of friends in the same city as me.

But once I told my friends and colleagues that I had decided to move, it turned out multiple people knew at least one friend in Seattle, and they were more than happy to introduce us via email. By the time I arrived, I had already set up coffee and happy hour dates with at least five people. Once you've met a few people, they introduce you to their friends, and suddenly you're not feeling so isolated anymore.

Sure, it was easier to meet people than I imagined, but your entire social network isn't going to fall into place immediately. That doesn't mean you should spend all your free time alone in your apartment watching Netflix and eating ice cream (although, don't get me wrong, this is a totally acceptable activity from time to time).

One of the best parts of moving to a brand new city is that you get to play tourist, and there are plenty of fun activities to do by yourself. Museums, scenic parks, aquariums, and visiting landmarks are all activities that can be enjoyed solo. Whenever I wanted to do something in New York, my first instinct was to text a friend asking if they wanted to join me. I've been pleasantly surprised by how relaxing and enjoyable it is to sightsee on my own.

The best way to get to know your new city is to walk as much as possible. If you're lucky enough to get good weather during the first weeks and months in your new city (I was promised rain and gloom in Seattle, but the city didn't deliver), I recommend walking rather than taking public transit. By doing this, I've discovered countless restaurants, coffee shops, small art galleries, and beautiful neighborhoods that I otherwise never would have known existed.

5. Have A Sense Of Humor About Cultural Differences

New Yorkers, and East Coasters in general, are known for being an impatient bunch. I'm definitely guilty of this, and when I first arrived on the West Coast I was baffled by how laid-back everyone was. "

Why is this latte line moving so slowly? Doesn't everyone realize my need for caffeine is dire? I asked myself every morning. It's an adjustment that I'm still working on, but it's been healthy for me to adapt to a different change of pace. Let's be honest, I'm not so important that I can't wait an extra few minutes for my morning caffeine fix.

6. Get Yourself Into A Routine

It's natural to feel a little off-kilter when you first move. You're in an unfamiliar place and are still dealing with a lot of unknowns. As exciting as it is, it's also going to be stressful at times.

For many of us, there's comfort in building a new routine. Try to establish healthy sleeping and eating patterns immediately, because feeling physically healthy and energetic will make a huge difference. Find a gym you like, pick your go-to delivery restaurant for the end of a rough day, and arrange FaceTime dates with your best friends. Have a regimen, but don't force yourself to structure every minute of every day. Allow yourself free time to catch your breath, watch a guilty pleasure TV show, or simply wander your new neighborhood.

7. Accept That There Are Some Things You'll Miss

According to unofficial data (aka my feelings and what my friends have told me about their feelings), FOMO rates are at an all-time high when you move, and I suspect social media has a lot to do with that. Don't be surprised if you feel pangs of sadness when you see Instagram posts of your friends hanging out on a rooftop together or at one of your favorite spots in your former city. It doesn't mean you made the wrong decision by moving; it just means that you made some strong relationships and memories in your former home, and that's something to be grateful for.

8. Try Not To Have Regrets

If you put in all the effort and planning to make a huge move, it's because something wasn't working in your previous home city. Once you've arrived in your new home, embrace every opportunity and stay positive when things get stressful. If you don't love it as much as you hoped, that's definitely disappointing, but there's no rule that you have to stay forever. Take comfort in the knowledge that you took the initiative to give yourself a clean slate and new opportunities. That's something to be proud of, whether you end up staying in your new city for one year or the rest of your life.