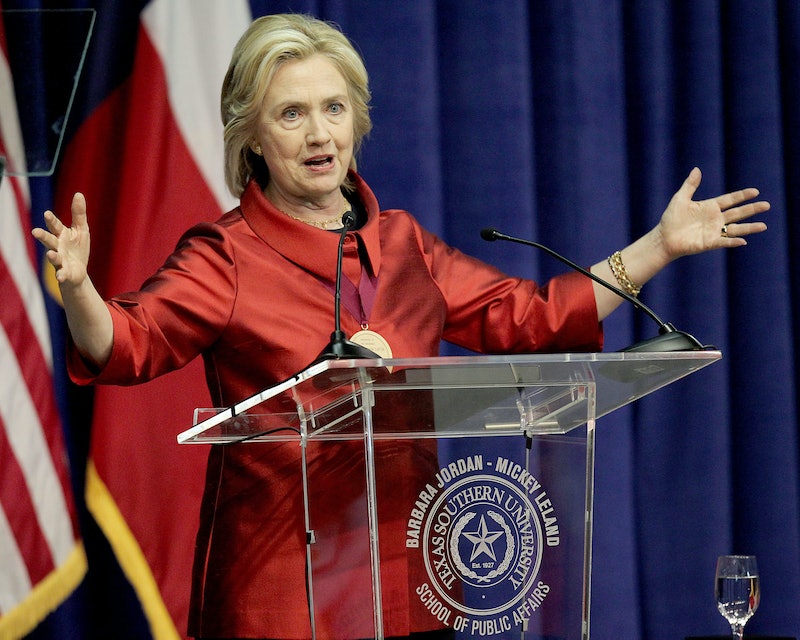 "Chris Christie, Scott Walker, Jeb Bush, Rick Perry ... *mic drop*." OK, that's not exactly how it happened, but Hillary Clinton called out conservative politicians for their voter ID law stances at a Houston rally on Thursday. The callout was the most significant partisan jabs Clinton has made in this campaign. Could that passion mean she'll adopt voter access as a major part of her platform?

Today, Republicans are systematically and deliberately trying to stop millions of American citizens from voting. What part of democracy are they afraid of?

And just you were confused who specifically was doing all of this, Clinton goes on to clear that up. She welcomed Perry, who announced his candidacy earlier that day, to the race with a jab at Texas' restrictive voter ID laws that were strengthened under his leadership as governor. She also cited 2016 hopefuls Christie, Walker and Bush, current and former governors in states with strict voter ID laws.

Governor Perry is hardly alone in his crusade against voting rights. In Wisconsin, Governor Scott Walker cut back early voting and signed legislation that would make it harder for college students to vote. In New Jersey, Governor Christie vetoed legislation to extend early voting. And in Florida, when Jeb Bush was governor, state authorities conducted a deeply flawed purge of voters before the presidential election in 2000.

Clinton called for universal automatic voter registration for all citizens over 18, a move that would benefit Democrats because it would make it easier for many of the voting blocs they have a lock on to get out and vote. But outside of political calculus, universal automatic voter registration would remove a legislative hurdle that disproportionately affects people of color, low-income and young people.

Perry's camp, of course, sees this differently. And they're none too happy about Clinton marching into the homestate and railing against their laws. Perry spokesman Travis Considine told The Washington Post:

While it is unfortunate, Gov. Perry is not surprised that Hillary Clinton would come to Texas and call for weakening the integrity of our election process.

Meh. You say potato, I say voter disenfranchisement. Regardless, Clinton seems to be making voter access one of her top priorities. If it's going to be a reoccurring theme, then Clinton picked a great place to wage her first battle. Not only does Texas have one of, if not the most controversial voter identification laws in the country, but The New York Times also noted that Texas is the birthplace of Lyndon B. Johnson, who designed the seminal 1965 Voting Rights Act.

So watch for Clinton to take on voter access more, and maybe call out some more Republicans in the process.