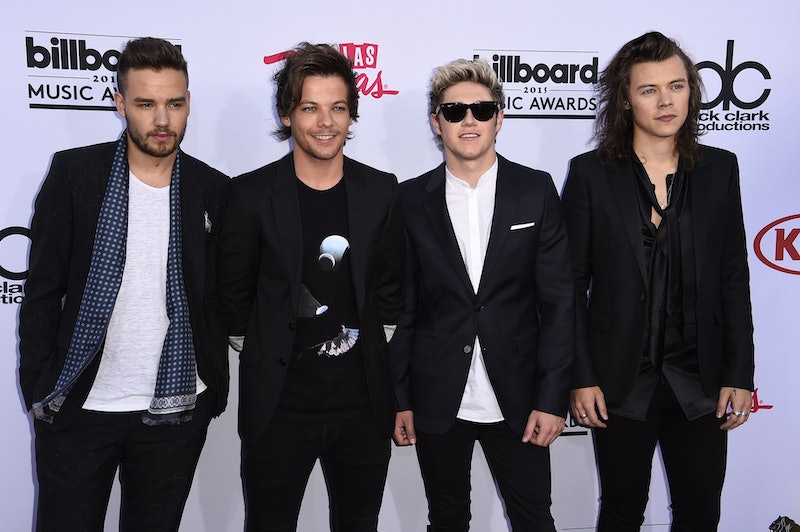 On Thursday night, rumors began swirling that One Direction were going on a hiatus. It was a story birthed by The Sun — which, in the One Direction fandom, is actually a pretty credible source, seeing as how the U.K. paper has a relationship with the boy band that has enabled them to get exclusive after exclusive (including Zayn Malik's first post-1D interview). As harried tweets surrounding the impending Sun story swept through Twitter and Tumblr on Thursday evening — and once the news broke on Friday morning — the fandom had pretty much just one question on their minds: Are One Direction really going on a break?

According to the band's rep, the Sun article — which claimed One Direction would take a break for a year after they promote their upcoming fifth album — is totally fabricated.

"All pure speculation and not based on any facts," the rep told Billboard about the One Direction hiatus rumors. "The band are excited about their brand new fifth album and their upcoming tour." It's a sentiment that Harry Styles himself echoed in his recent interview with Ryan Seacrest, during which, in between conversations about his rumored sheep placenta facials and the like, he focused on his excitement about the band's immediate projects.

With the band's rep assuring Directioners around the world that the Sun story is "pure speculation," there's no denying the fact that I'm casually sitting over here breathing one enormous sigh of relief. I wouldn't consider myself a 1D stan, per se, but when you know the ins and outs of Harry Styles' map of tattoos and love how Niall Horan sings about a freaking hard candy in "Over Again," I'd say that I was more than just a casual fan and would be pretty devastated if 1D were to go on a break. Mostly because anyone who has ever been in a relationship knows that "break" is code for "breakup" and One Direction would probably not call you again even though you've texted them 30 times in a row. Debbie Downer over here, I know. But I was also that person crying at my desk listening to "Don't Forget Where You Belong" when Zayn Malik quit the band, so that's what we're dealing with here.

That being said, One Direction are long overdue for an actual break from the non-stop insanity that has been their lives for the past five years. Not necessarily a scary-sounding, official one (from which they would probably never return, let's be real here), but an honest-to-goodness break, where they have time off to see their families and do "normal 22-year-old" things, to quote Zayn Malik. They've been running themselves into the ground and the band cannot — and most likely, will not — sustain that kind of pressure. Though part of me is filled with relief that the band isn't going on a hiatus, the other part knows that they kind of need to... and, yeah, that's a tough pill to swallow. But it might make them even stronger in the end.

More like this
Did BTS Break Up? Members Explain Their Hiatus & Promise To “Return Someday”
By Alyssa Lapid
BTS Announced An Indefinite Hiatus & The ARMY Is Freaking Out On Twitter
By Sam Ramsden
Britney Has Been Granted A Restraining Order Against Her Ex-Husband
By Bustle Staff
Who Is Betty Who Dating? The Australian Singer Is Married To Her Tour Photographer
By Radhika Menon
Get Even More From Bustle — Sign Up For The Newsletter