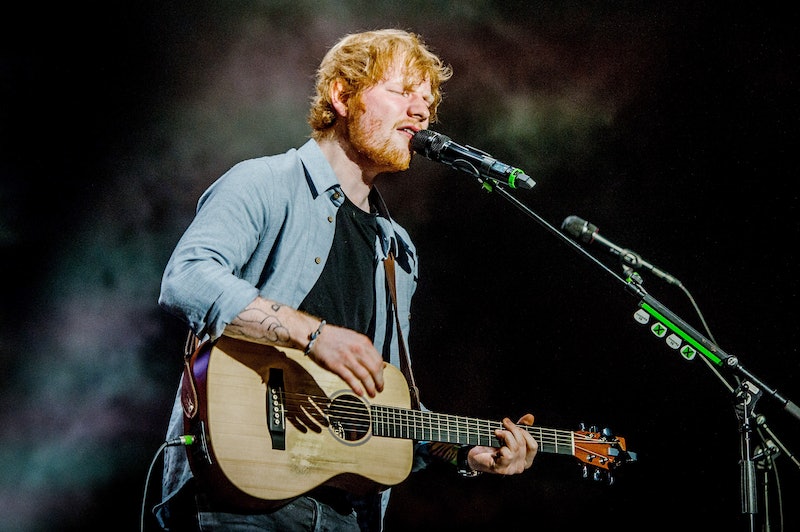 If you've been listening to Fetty Wap's "Trap Queen" non-stop for several months now, you're not alone. I could write several posts that boil down to "10 Reasons There's No Point Listening To Any Other Song" but that's probably unnecessary. Regardless, if "Trap Queen" is your anthem, but you also have a soft spot for Ed Sheeran (because, hey, what's up, hello, you have two ears and a heart don't you?), then you're about to cry real happiness tears because Ed Sheeran covered "Trap Queen" on The Tonight Show Starring Jimmy Fallon and I can give you a 100% guarantee that this will not only take your Friday from a 3 to a 10, but it will also inspire you to do something fun later, and maybe even say yes to that second (OK, third) glass of wine.

This isn't the first time Ed Sheeran has teamed up with The Roots and Fallon to cover songs: He did a bizarre mash-up of Limp Bizkit, Iron Maiden and Ty Dolla $ign for a Tonight Show commercial. This cover is also well-timed because Fetty Wap performed on The Tonight Show about a month ago, which is also worth watching.

Here's the life-fixing video of Ed Sheeran and The Roots cover of "Trap Queen" on The Tonight Show:

If you plan on listening to this for the next 2 hours on repeat, you're not alone. Here are 4 other collabs we'd really like to get Ed Sheeran on STAT:

"Started From The Bottom" by Drake

Drake collab is what the people want most. Let's give it to them.

I'm really sorry to be the one that suggests Ed Sheeran cover a song with female vocals... but like, I'm not the first the suggest that. Be real.

Side note, the beginning of this video is comedy gold.

Birdy gets a lot of attention for her covers of Bon Iver's "Skinny Love" and "Young Blood" by The Naked and Famous. The latter cover is 800 percent better and her voice blended with Ed Sheeran's would be all kinds of magical.

"Primadonna Girl" by Marina & the Diamonds

I guess I sort of leaned into the female comparison thing. But I stand by the fact that this song would sound good a few octaves lower.

It's a #blessed day, people. Get out and live.