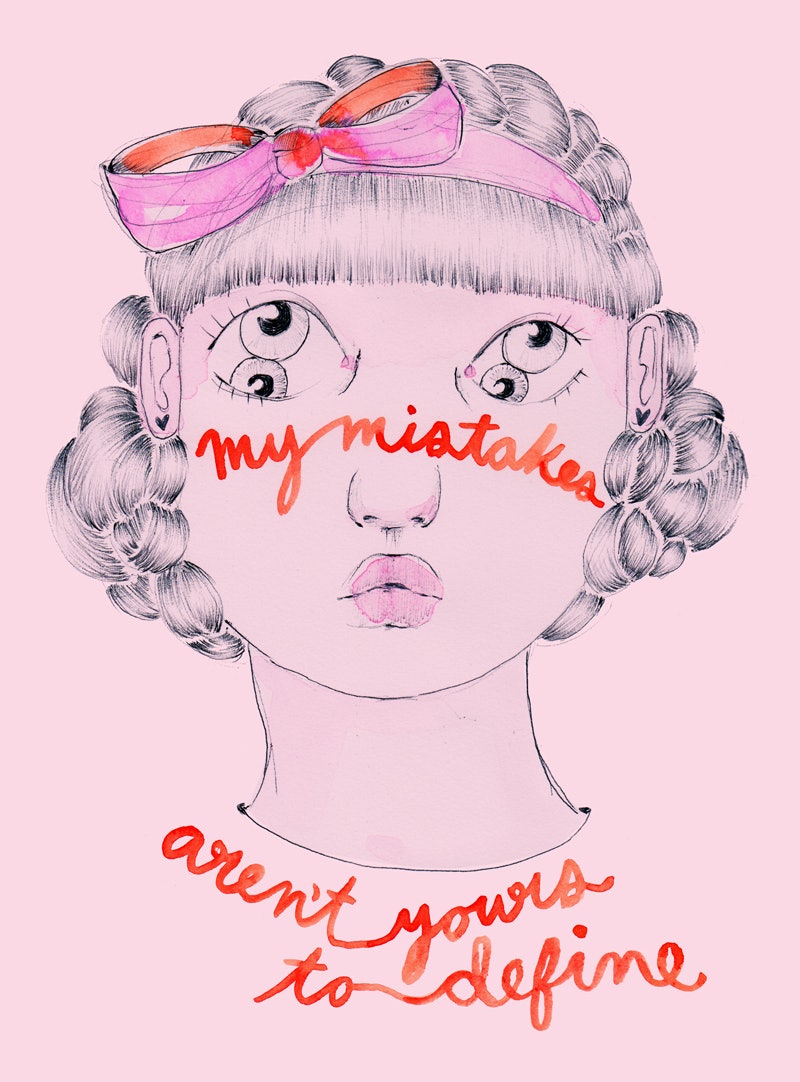 Attention all lovers of feminist art! You need to go check out the Ambivalently Yours Tumblr. Immediately. You'll thank me, I promise.

Ambivalently Yours was started in 2012 by an anonymous artist who says she often found herself feeling "caught between two worlds."

"I was studying feminist art and working in the fashion industry, which seemed like a huge contradiction," she told Bustle in an email. "At work, I was the feminist killjoy every time I raised a concern about the sexist undertones in our campaigns, and in art school I was the fashion girl who many assumed was duped by the patriarchy just because I liked cute clothes and girly colours."

It's a feeling that I think a lot of socially aware people are familiar with. People rarely if ever fit perfectly into the mold of a "perfect feminist" (whatever that is). But in other contexts, being a feminist at all feels like you're somehow causing problems or like it's getting in the way of enjoying something or like there is no way to reconcile different parts of yourself that you don't think are contradictory but that the world doesn't think could ever go together. Although that last part might just mean that you're human.

Perhaps it's because they came out of that very relatable struggle that the Ambivalently Yours Art feels so powerful.

Eventually, the artist says, "I decided to stop worrying about what others thought of me and embrace my contradictions. Ambivalently Yours became my way of unapologetically exploring my feminist questions from this in-between place."

And thus the Tumblr was born full of art that combines pastel colors, feminist messages, surreal images, and a lot of pink. Because who says pink is incompatible with feminism?

And people are definitely fans. Though she does occasionally get trolls, she says that most of the feedback she gets is positive. "I think teenage girls and women in general have a reputation for not being supportive of one another, but my experience has been the complete opposite," she explains. "There is a huge support system for women and by women that exists online, especially on Tumblr."

And although much of her audience consists of young women, she also thinks that the drawings can be for people of all ages. "Like feminism," she says, "my work is for everyone. In other words, my aim is to inspire people to become unapologetic about their emotions and political beliefs by embracing their inner teenage girl."

The artist is currently thinking of expanding the project by putting the drawings in other formats, such as a book or a gallery exhibition.

More like this
25 Quotes About Love To Share During Pride Month 2022
By Madeleine Aggeler and Emma Garza
Meet The Spice Company Founder Who Sees Chai As A Metaphor
By Madhuri Sathish-Van Atta
What Does “Gatekeeping” Mean On TikTok? The Viral Term, Explained.
By Courtney Young
TikToker Kate Glavan Has The Antidote To The “Hot Girl Walk”
By Alexis Morillo
Get Even More From Bustle — Sign Up For The Newsletter