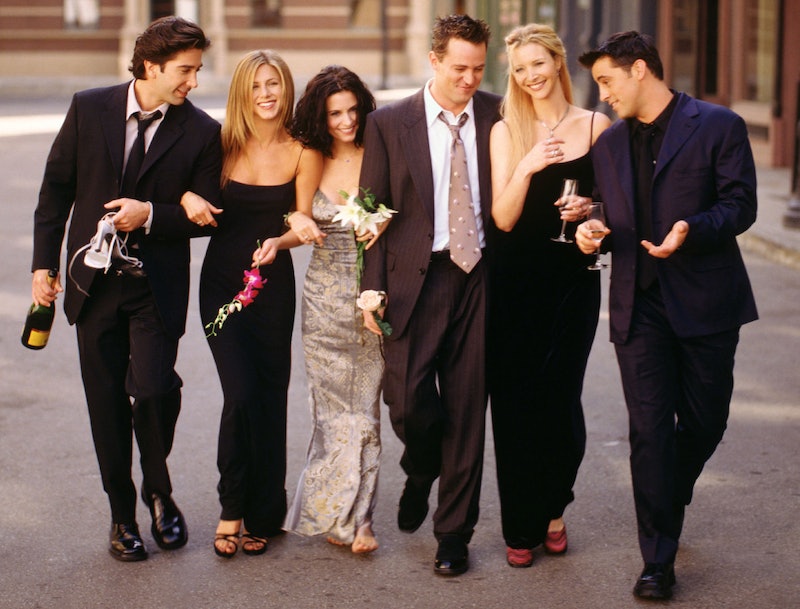 During June's 2015 ATX Television Festival in Austin, the co-creator of Friends Marta Kauffman made it clear: a Friends reunion will probably not happen. Though her reasoning was pretty sound and, as a fan, I respect, her wishes — it is her show, after all — I can't help but feel completely and utterly gutted at the idea of no new Friends episodes in my life, ever. I'm just not ready to let go! So, just in case Kauffman ever changes her mind about doing a Friends reunion, I have a few ideas on how it might work.

To be clear, you guys, I'm not asking for an entire new show, à la the upcoming Full House sequel, Fuller House — I'm not even saying we need to see an entire new season of the show, à la Arrested Development! All I want is one big reunion, whether it's a special on television or in movie format. There would have to be some changes, and things would have to be a little more realistic — but I still firmly believe one big reunion would work and would be amazing. Hey, if Entourage can do it, why not Friends?

The show could pull a Veronica Mars and have the gang come back together for Monica and Rachel's 30th high school reunion. The hijinks would be amazing: Of course, Monica would have to prove she's better than most of the people with whom she went to school (Rachel doesn't count, duh), so she'd rope Joey in to coming as a special celebrity guest, because obviously he'd be famous at this point. Rachel is, of course, still the popular girl in school, and she falls right back into the role more easily than she could have ever imagined. Despite not attending their school, Phoebe tags along and volunteers her services as the musician for the event. She plays "Smelly Cat." It's amazing.

If the gang all got together for her first birthday, the gang would definitely get together for Emma's 18th party — especially since Rachel would make it a huge event, My Super Sweet 16-style. Question is, what kind of girl is Emma now? Does she love science like her dad, or is she a popular cheerleader-type like her mom? My hope is that she's something completely different — which will just confuse her parents and make for some hilarious scenes.

3. Monica Opens Her Own Restaurant

After 10 years of working as an executive chef at many amazing restaurants, Monica finally saves enough money to build and open her own restaurant — of course, along with Chandler. The gang gathers together to help in various ways: Rachel assists with the aesthetic for the restaurant, since she's now a big time fashion designer with a reality show who has branched into other ventures. Joey, now a big movie star, tells Monica he'll bring his other famous friends for the opening. Chandler's marketing company takes care of publicity and advertising for the restaurant. Phoebe provides the musical ambience (she makes sure to record the music first). And Ross... talks about dinosaurs a lot, and its really weird.

4. Or They Could Do Jennifer Aniston's Idea For A Reunion

Not the idea where the show pulls a Six Feet Under and shows how all of the friends died — no, I mean the idea where they're all old and in retirement homes, like Golden Friends, or something. We'd have to wait a while for this one, considering the entire cast still looks as young as ever — but it would be worth it, because THINK OF THE SHENANIGANS.