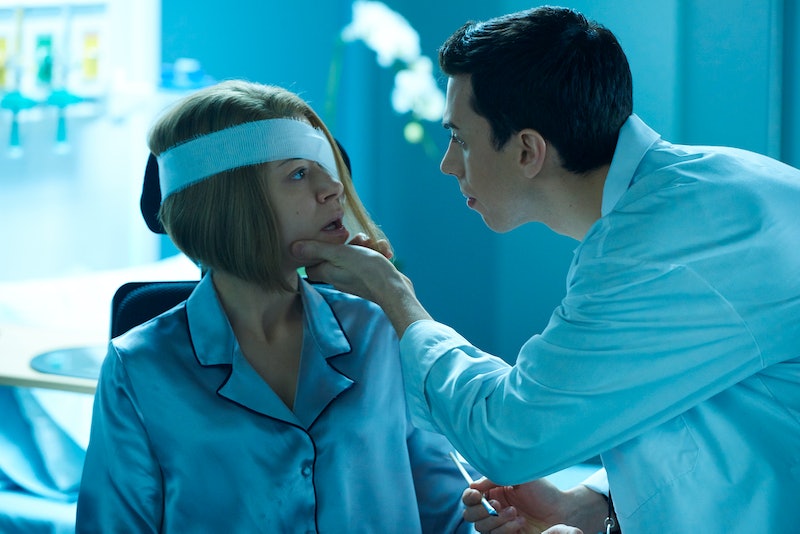 My new favorite television villain is One-Eyed Rachel. She's conniving, she's deceiving, she's out for everyone's blood. And don't let that wheelchair and one-eye thing fool you, she will destroy you if she's given the chance. During "Ruthless in Purpose, and Insidious in Method" she's actually given, nay handed, the keys back to the Dyad Kingdom, and she takes them. I didn't see it coming at all, so you've even fooled me, Rachel. Now that she's back in charge (though no one really has noticed it yet), is this the beginning of the end for our clones on Orphan Black? Is there even anyway that Sarah and the rest of the Clone Club can gain the upper hand again?For this past season, Rachel has painted herself as the victim. I get it, she's totally the victim, since she not only lost her eye, but she also lost her dad (Duncan), and everything she had worked so hard for at Dyad. It must be tough to one day wake up in a totally new environment, and standing, and then have to figure out how to talk again. Now I'm wondering if this whole thing was just an act, though, and Rachel was simply waiting for the perfect time to put her plan into action.

Here's what really goes down. The secret Island of Doctor Moreau book isn't a secret anymore. Delphine calls Cosima and Scott out on it, and they hand it over. Luckily, they're smart enough to have made a copy of it. However, it's useless to them unless they've got Rachel to decipher it for them. They hatch a plan to break Rachel out of the hospital and take her to S's to start decoding it again. It almost works. That is, until it's discovered that Rachel's escaped, and it's time to retrieve her. The copy of the Moreau book is taken from Rachel, and she freaks out so much she has a stroke. Next thing we see, Dr. Nealon is telling Delphine that Rachel's prognosis doesn't look good, and she's in an induced coma, maybe with irreparable damage. It's like, what! No! Not Rachel! I mean, I was never the biggest fan of her, but I don't want her dead, either.

Good thing this is all a HUGE fakeout. Somehow, Nealon swapped Rachel and brand new clone, Krystal, at the hospital. So it's Krystal who's really in the coma, and Rachel is off somewhere (sounds like overseas), free from her hospital prison. Oh, and the medical team is getting ready to go in and cut out one of Krystal's eyes, so that can be sent over to Rachel so she can have her full vision back. How's that for a clone switcheroo? There hasn't been a clone, pretending to be a clone in a coma before. This is a first. This also means that Rachel is back in charge again. She's got the Moreau book. She feels that it is rightfully hers, meaning that the genetic code for the clones is rightfully her's too. Is she going to decode it herself, and then keep the secrets to herself, too? Where is she, anyway? Not only that, who's side is she on? Nealon knows the truth. Delphine does not. Delphine fully assumes that Rachel is in a coma, and that's what she's going to tell the other clones, too. Now they're going to start mourning Rachel, but the big twist is that she's still alive, and also working against them. Could she join up with Castor? If there's one clone you really don't want to make mad, it's Alison. And after Alison, it's Rachel. So that's why Rachel is my new favorite villain. Wherever she is, I hope she purchases a fluffy cat, and strokes the cat while staring out a big window at the horizon.