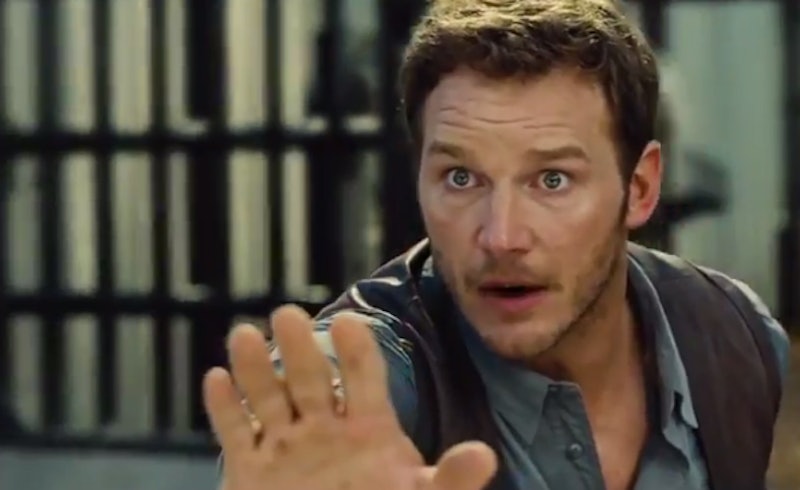 Surprise! The final Jurassic World trailer is here to gift you with the brand new phobia you didn't know you needed: an irrational fear of dinosaurs! More specifically, an irrational fear of terrifyingly realistic genetically modified dinosaurs engineered to serve as prime nightmare fuel. The latest installment in the Jurassic Park series will ruin natural history museums for you with a story about an increasingly greedy park operations manager, played by Bryce Dallas Howard, who figures dino-island could use bigger, scarier dinosaurs. This is the worst idea of all time, which becomes painfully clear when a giant genetically engineered T. Rex, who DGAF about anyone or anything, goes on a mass killing spree. Naturally, Chris Pratt and his new biceps step up to the challenge of taking down the rogue T. Rex by declaring he's got a special relationship with and knowledge of the animals that qualify him to "do it my way," whatever that means.

If that sounds like a lot of spoilers, that's because it is a lot of spoilers, and the trailer is full of them. Newly minted dino-phobes and fans of the original Jurassic Park: there are no surprises here. These are the biggest, most flagrant spoilers from the new Jurassic World trailer that will tell you everything you need to know about the movie:

This Little Guy Doesn't Make It:

Not a major spoiler, but heartbreaking nonetheless. RIP, Babe.

Chris Pratt Is The Dinosaur Whisperer

Did he just try to speak to a Velociraptor? BONUS SPOILER: The dinosaurs maybe communicate with humans??

These Aren't Your Run of the Mill Dinosaurs

These are cool, genetically modified dinosaurs.

There Will Be Blood

Because genetically altered dinosaurs were kind of the worst idea ever.

The Dinosaurs Have An Intricate Intra-Species Communication System

Check out the full and final Jurassic World trailer here: