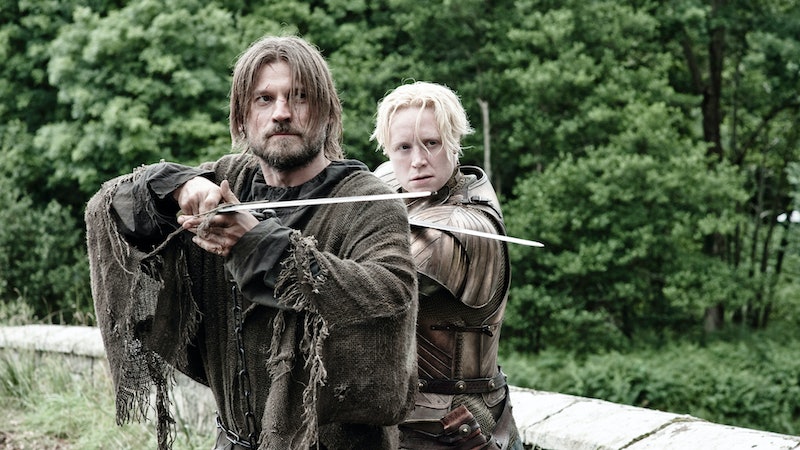 No other Game of Thrones duo makes my heart sing quite like Jaime and Brienne. From the moment they met at the end of Season 2 right up until their subtly heartbreaking farewell in Season 4, Jaime and Brienne were my favorite part of Game of Thrones . Their mutual journey, tragic and tortuous though it was, brought out the best in them. Jaime regained a small piece of his honor during his time with Brienne, while Brienne learned life was not as black and white as she would have liked it to be while travelling with the morally complex Kingslayer. As a shipper, I also have to mention they were freaking adorable together. So there's that. I am not going to claim they should reunite for superficial reasons though — although I would not be mad at the writers if they went in that direction — they need to reunite because their stories were so much stronger when they were together than they are now that they are apart.

Granted, there is a location problem that makes it difficult for a reunion to take place in Season 5. Brienne is right in the heart of The North waiting to make her move to rescue Sansa, while Jaime is in warm and sunny Dorne. Geographically speaking, the only way they could be further apart is if Brienne was beyond The Wall and Jaime was chilling in Dothraki country. Still, there are lots of reasons why Thrones needs to find a way to bring Jaime and Brienne back together again sooner rather than later.

1. Their Chemistry Is Unmatched

Gwendoline Christie (Brienne) and Nikolaj Coster-Waldau (Jaime) crackle when they are on screen together. They create this wonderful push and pull of animosity, respect, and friendship whenever they share scenes. The dynamic of an honorable woman who wants so desperately to be a knight and a knight who wants to be honorable is the best thing that has come out of Thrones, as far as I'm concerned.

2. They Added Much Needed Humor

Jaime and Brienne's time together was not exactly a laugh riot. Jaime lost a hand and Brienne got tossed into a bear pit, but even when they were fighting for their lives, they somehow managed to sneak in some banter. The levity their opposing personalities brought to the show provided a much needed break from the oppressive darkness that shrouds Westeros.

3. Jaime Is Floundering Without Brienne

Dorne does not suit Jaime. I like the idea of Jaime bonding with his daughter in theory, but in practice the storyline has been kind of a nonstarter this season. Jaime feels directionless and adrift. He's going through the motions of trying to be a better man, but Myrcella doesn't really need rescuing. When Jaime was with Brienne his story had a much clearer purpose, and it would be nice to see him get his drive back.

4. They Make The Best Faces When They're Together

Did I promise not to be superficial? Sorry, I lied. THEIR FACES, OK? The way they look at each other makes me giggle more than the Pillsbury Dough Boy, and I need that relief when I'm watching Thrones. It's an intense show and I find happiness where I can... like in the way Jaime and Brienne look at each like they are the most infuriating and wonderful people on the planet.

5. The Books Demand It

Jaime and Brienne's story has diverged way, way off the path of the book series. I am trying to accept this fact, but without spoiling anything just in case, you should know they do meet again under interesting circumstances. In fact, their last book meeting was a cliffhanger and since it is taking George R.R. Martin longer than expected to finish Winds of Winter, my hopes were high that the show would tackle that particular plot. Even though they are in different locales, it is not too late for the show to course correct just enough to bring this particular story element into play, and given how grounded the story is in Brienne and Jaime's mutual history, I think it would be thrilling to watch.

6. They Need to Know How Each Other's Stories End

Both Jaime and Brienne are on the journeys they are on right now because of each other. If they never meet again, if for no other reason than to swap tales, that would be an actual tragedy. When a person is as vital to another person's drive as Jaime and Brienne are they deserve a more fitting goodbye. Jaime sent Brienne on a quest and their mutual story demands the ending of that quest be revealed to both parties.

7. They Need to Fight One More Time

Jaime and Brienne need to cross blades again, either for sport or because they find themselves on opposite sides. There is nothing like watching a story come full circle and seeing these two fight one more time would be the best kind of full circle storytelling. However, it cannot happen if they are in two completely different locations. It's about time these crazy kids got back together, don't you think?