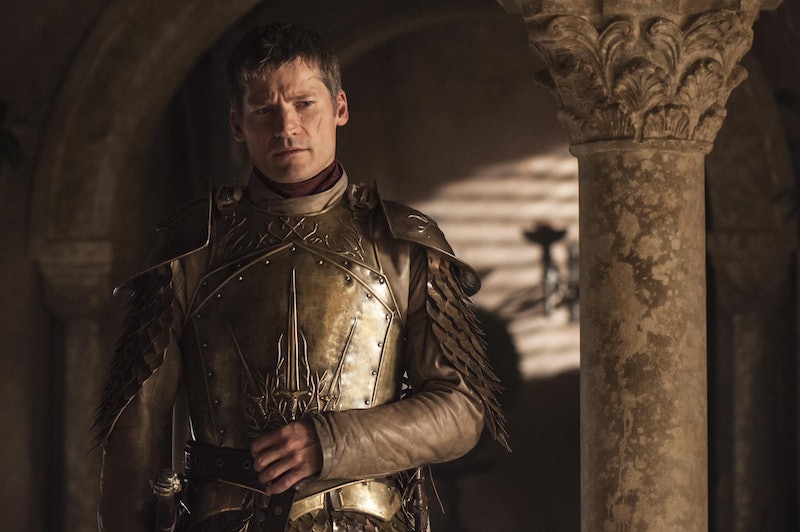 For four epic seasons, HBO's Game Of Thrones has been one of the most remarkably faithful book-to-television adaptations in recent memory. While series like True Blood and Dexter took their literary inspirations and spun them off in completely original directions, Thrones showrunners David Benioff and D.B. Weiss have always hewn very close to George R.R. Martin's fantasy saga, A Song Of Ice And Fire. But with the TV show quickly gaining ground on its still-unfinished source material, more and more deviations are inevitable... and it's looking increasingly possible that Jaime Lannister could die in Season 5 as one of the first victims of the showrunners' inventions.

It's already common knowledge that Game of Thrones will now be spoiling events that haven't yet unfurled on the page. "Luckily, we’ve been talking about this with George for a long time, ever since we saw this could happen," said Benioff in reference to Thrones catching up to Martin's books. "We know where things are heading. [...] There might be a few deviations along the route, but we’re heading towards the same destination."

Martin himself has admitted that one of the results of Benioff & Weiss being forced to wing it in the absence of his sixth book, The Winds Of Winter, is that characters who are still alive on the page are starting to be killed off on the show. "People are going to die who don’t die in the books, so even the book readers will be unhappy. So everybody better be on their toes," the author warned in a Showbiz 411 interview. "David and D.B. are even bloodier than I am." And that's saying something.

In its recent spread on Thrones ' upcoming season, Entertainment Weekly spoke — under conditions of anonymity — with the actor who's the first casualty of this phenomenon:

I thought this season I was going to have more to do, and I was really looking forward to that. And then I got my dates from my agent and I thought, 'That doesn't tally.' Because there was no way if they were sticking to the books that I should be in for that number of weeks. It seemed to me they must be writing me out. The [showrunners] rang me and told me, 'Your time is up in this series.' I'm disappointed, but you have to accept that the demands of TV are different. I find myself being quite emotional about it. I'm going to miss it.

Here are a few reasons why Nikolaj Coster-Waldau, the man who plays Jaime Lannister, may very well be the actor whose "time is up." (Warning: possible book spoilers ahead!)

His Feast Subplot Has Been Cut

In A Feast For Crows, Jaime's storyline involves leaving King's Landing and traveling to the Riverlands, where he attempts to clean up the ravaging effects of the War of the Five Kings. This involves the siege of Riverrun, a plot that involves several chapters, protracted negotiations, and little excitement. It's no surprise, then, that this was one of the casualties of Benioff & Weiss's efforts to streamline Martin's often-rambling fourth and fifth novels. In Thrones, Jaime will still leave King's Landing — but he'll head instead to Dorne to rescue his niece/daughter Myrcella (pictured above) from the vengeful Martells, still seething over Oberyn's death at the hands of Gregor Clegane last season.

While probably no one on Earth is sad to see the siege of Riverrun fall on the Thrones chopping block, its omission does speak volumes about Jaime's importance in the books. Remember, the showrunners supposedly know where Martin is headed. If Jaime's foray into the Riverlands was crucial at all in the long run, surely they would have found a way to make that storyline more engaging, rather than sending the character into a completely different corner of Westeros.

He Could Be Taking The Place Of A Doomed Character

Jaime's presence isn't the only thing in Dorne that will be different on Thrones. Oberyn's bastard daughters, called the Sand Snakes have been consolidated down from eight feisty young women to only three. And instead of each of them having a different mother, they all came from the same woman: Oberyn's paramour, Ellaria Sand (above left). This is according to Ellaria's portrayer, Indira Varma, who spilled the beans in an interview with The Independent : "We go to Dorne [...] you meet some of her clan and sh-t happens! I've got three hot, hot daughters." In addition, Varma's continued presence on the show implies that she herself has become the composite of two different characters: both Ellaria and Oberyn's niece Arianne, the daughter of Dorne's ruler, Prince Doran. Ellaria is mostly absent from the books after A Storm Of Swords, while Arianne begs her father to seek revenge for her uncle's death.

In the spirit of consolidation, it seems as though Jaime's character might be melding with another never introduced on the show: Arys Oakheart. In the books, Ser Oakheart is a member of the Kingsguard (like Jaime) who's charged with protecting Myrcella while the young princess is in Dorne (much like Jaime will be doing in Season 5). Why is this bad news for Coster-Waldau? Because Arys's story doesn't end well. In Feast, the knight is seduced by Arianne into supporting Myrcella's claim to the Iron Throne over her younger brother, Tommen — a mutinous plot that leads to Arys's death at the hands of the formidable Areo Hotah, the captain of Prince Doran's guard (above right).

He Might Not Last Long In The Books, Either

Even with all of those signs pointing towards Jaime's possible demise, it's still hard to believe that Benioff & Weiss would kill off such an important character if Martin still has big plans for him. But what if he doesn't? The last time we saw Jaime in A Dance With Dragons, he was being led into the forest by Brienne of Tarth, who told him she was taking him to Sansa Stark, who she had finally found after what felt like years of searching. (You know what I mean, book readers. "Have you seen a highborn maid of three-and-ten, with a fair face and auburn hair?" Ugh. If I hear that sentence one more time, I swear to the old gods and the new...)

But Brienne isn't taking Jaime to Sansa, she's taking him to Lady Stoneheart — aka the resurrected corpse of Catelyn Stark who was famously cut out of the TV show to book readers' unending consternation. When Stoneheart found out that Brienne was on a mission for Jaime Lannister, carrying a Lannister sword, the Lannister-hating zombie gave the Maid of Tarth a choice: die... or deliver Jaime to her. Given where Dance left off, it's not impossible that The Winds Of Winter could feature the shocking death of an amoral-turned-sympathetic character at the hands of a sympathetic-turned-amoral character. If that ends up being the case, then it would turn out that Benioff & Weiss weren't that ahead of the game by killing Jaime off in Season 5.

With Lady Stoneheart nonexistent in the show's universe, they would need to devise a different way to arrive at Jaime's death scene anyway — and shipping him off to Dorne to take the place of a doomed character would be the perfect way to do that.

Cersei's Prophecy Has Been Changed

There is a popular fan theory about the Song Of Ice And Fire books that would go against the idea of Jaime being killed off at this point. In Feast, we learn that much of Cersei's paranoia, protectiveness of her children, and hatred of Tyrion all stems from a prophecy delivered to her by a woods witch. When she was much younger, Cersei and a couple of her childhood friends visited a sorceress named Maggy the Frog to have their fortunes told. Maggy foretold that Cersei would become queen... before being overthrown by another younger and more beautiful than she. (Hence Cersei's mistrust of Margaery Tyrell, Tommen's bride-to-be.) She also predicted that Cersei would have three children — all of whom would die before her — and that her eventual death would come at the hands of the valonqar... which is the High Valyrian word for "little brother."

Cersei assumed the valonqar was Tyrion. But popular conjecture states that the little brother in question is not the Imp... but in fact her twin, Jaime, who is technically several minutes younger than Cersei. What would drive him to throttle his own sister/lover to death is unclear at this point, but Jaime dying in Season 5 would rule out this tantalizing possibility. We know this prophecy has made the translation to the screen: the new season opens with the show's first-ever flashback scene according to EW, to young Cersei and Maggy the Frog. And we know that Maggy's predictions are accurate: she also prophesied the death of Cersei's friend Melara... who fell into a well and drowned that very night. (And Maggy is assumed to be a bastardization of the Dothraki word maegi, for witch — like Mirri Maz Duur, who worked dark magic on Khal Drogo and cursed Danaerys after her village was razed.)

While this may seem like a point in the "Jaime Lives" column, there are advance reports of the Season 5 premiere, including one from Zap2It, that claim Maggy's prophecy has been altered slightly: "Season 5 kicks off with a flashback scene, and it's important because it drives the motivations for a certain character through the season. Avid book fans be warned: The prophecy delivered is missing some elements from George R.R. Martin's novels." If the aspect of the prophecy that's missing is the part about the valonqar, then Benioff & Weiss clearly don't plan on following through on this speculated Jaime/Cersei plot... and you can consider Jaime Lannister officially on deathwatch.