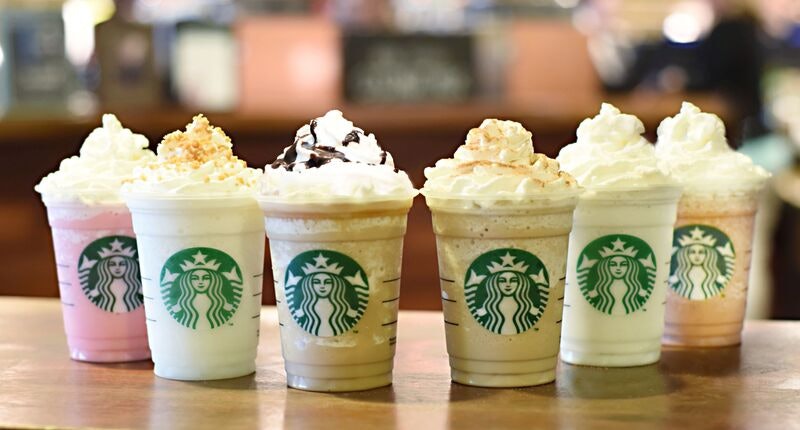 It's always a good day when Starbucks unveils a new menu item — but when Starbucks unveils six new menu items at the same time? Just try to keep your excitement in check. Starbucks Frappuccino Fan Flavors are here for a limited time only, which means starting June 8 you have a chance to get your hands on six different types of Frapps inspired by fans' most oft-repeated requests. Red Velvet Cake, Cupcake, Cotton Candy, Lemon Bar, Cinnamon Roll, and Caramel Cocoa Cluster Frappuccinos are all making appearances at Starbucks stores near you, and since it's probably going to be impossible for you to pick just one, you might as well go ahead and try 'em all.

In fact, it's encouraged that you try them all. Starbucks is rolling out its Fan Flavors in honor of the Frappuccino's 20th birthday (you may recall that little drink called a Birthday Cake Frappuccino that had Starbucks lovers going crazy in March), and to add to the excitement, the mega coffee chain wants you to vote on your favorite new flavor in a contest appropriately named the Frappuccino Flav-Off. Between June 19 and June 30, use your green straws to indicate which flavor you like best on Frappuccino.com/fanflavors (yes, that's a real website). Starbucks will announce the winning flavor on July 3, which will then be available in grande size for just $3 a pop July 3 through July 6, between the hours of 2 p.m. and 5 p.m. (in other words — just when you're gonna be craving a refreshing afternoon caffeine boost). Does it even get much better than that? I would say no, but every time I think Starbucks has truly outdone itself, the chain usually finds a way to bowl me over with an entirely new surprise (still reeling from those cookie straws, by the way).

So what do these new fan flavors taste like? I had a chance to give 'em a quick taste test — and trust me when I say you're not going to be disappointed.

Possibly the one I'm most excited about, this one tastes like the Cinnamon Dolce latte you loved in high school, only white mocha sauce and vanilla bean mixed with coffee make it that much more delectable.

The name may be a mouthful, but this Frappuccino is nothing but sweet. Toffee nut syrup and thick caramel sauce give this Frapp its amazing, velvety flavor.

Don't let the alarming shade of pink scare you — this Frapp is sweet and definitely tastes like your favorite fair food, but without being overpowering. In fact, one Starbucks barista told me this is the single drink she's most frequently asked to make by fans who know their way around Starbucks' secret menu.

Were you a fan of Starbucks' Birthday Cake Frapp? It's back — only this time without the pink raspberry whipped cream. Sometimes, simple is better.

Here's one you probably didn't see coming. Lemon and vanilla syrups come together in this blended creme beverage for a Frapp that tastes, well, just like an actual lemon bar. Strangely delicious.

See? With a lineup like that, how could you not try them all?

More like this
12 Aphrodisiac Desserts To Spice Up Your Valentine’s Day
By Kaitlyn Wylde
15 Black-Owned Liquor & Wine Brands To Add To Your Bar Cart
By Alexis Morillo
Learning To Love, Not Judge, The Lunchbox Wives Of TikTok
By Esther Zuckerman
16 Trader Joe's Appetizers That Are Total Party-Pleasers
By Kaitlyn Wylde
Get Even More From Bustle — Sign Up For The Newsletter
From hair trends to relationship advice, our daily newsletter has everything you need to sound like a person who’s on TikTok, even if you aren’t.