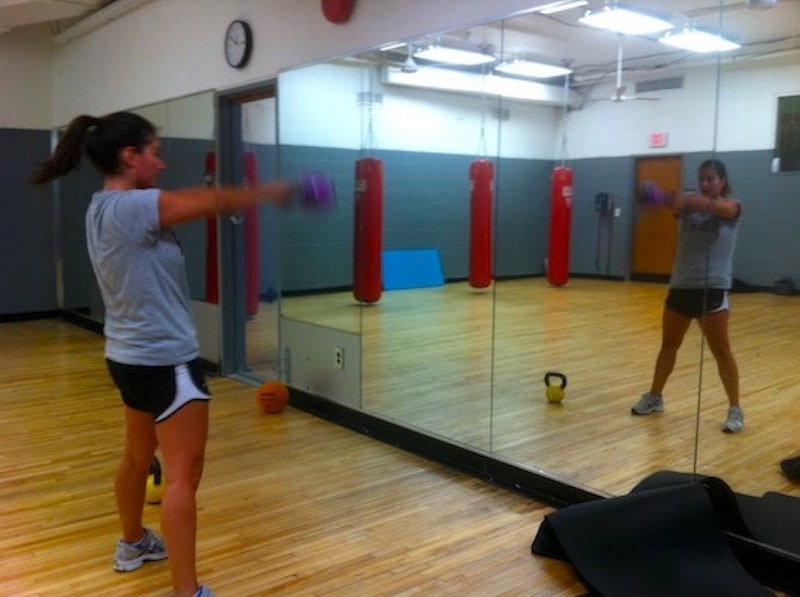 Exercise and I have a complicated relationship. After years of disordered eating and calorie counting, I found refuge in fitness; it allowed me to eat foods that had always been “off limits” (pasta! bagels!) without the overwhelming feelings of guilt or remorse. As long as I engaged in a high intensity, calorie-torching workout the next day, I felt balanced.

But last year, I found myself in a serious fitness rut. I was blowing off workouts, feeling unmotivated to sweat, and dragging my feet in classes. I struggled to understand where that ever-elusive endorphin high had gone and sought out my fix in one trendy boutique fitness studio after another. I stared at girls wearing leggings and sneakers on the subway and felt envious of their post-workout glow, promising myself that tomorrow I would rejoin their camp.

But the truth is, the way I was exercising just wasn’t making me happy anymore. Pushing my body to the point of exhaustion in cardio boot camp classes was leaving me feeling tired, dissatisfied, and triggered. I was obsessed with how many calories I was burning and comparing my body to the spandex shapes around me. I told myself skinny was no longer the goal; now it was about being “strong.” But my toned arms and abs never seemed lean or flat enough. I listened intently for praise from instructors, added more reps, and tuned out the feedback my body was giving me.

It was initially uncomfortable to wake up Monday mornings without my workout classes scheduled for the week, and at times, it was downright terrifying to eat full meals without balancing out the “damage” with an hour of cardio.

Even though I was pretty miserable during my workouts, I forced myself to attend my usual classes and log treadmill time. One morning, a good friend stopped me in the middle of one of my tirades about my exercise woes.

“Maybe your body is just exhausted and telling you what it needs right now. You should probably start listening.” She was right. My body wasn’t failing or letting me down — it was telling me, loud and clear, that it needed a break from exercise.

Coaches and exercise physiologists have long-touted the importance of resting muscle groups in between workouts, taking days off during training periods, and mixing up workouts for maximum benefits. But I was more interested in the mental and emotional benefits I would get from taking an extended break from exercise. I needed to change my entire approach to fitness, and I knew it meant starting with a fresh slate.

After a few weeks, I was amazed to find that my body hadn’t actually changed at all. For so long, I had been trapped in a cycle of calculating calories in vs. out, but my body was actually able to remain balanced without rigorous cardio sessions.

So I tuned into what my body was saying. It was initially uncomfortable to wake up Monday mornings without my workout classes scheduled for the week, and at times, it was downright terrifying to eat full meals without balancing out the “damage” with an hour of cardio. But the reminder of how burnt out I felt helped me push through the discomfort. I focused on moving my body in small ways that felt good. I traded in the cardio boot camp classes for long walks and a nonjudgmental yoga practice. I stretched, I meditated, and I treated myself to bubble baths and massages. Some days, I woke up and simply slept for an extra half hour instead of getting up and going to yoga.

After a few weeks, I was amazed to find that my body hadn’t actually changed at all. For so long, I had been trapped in a cycle of calculating calories in vs. out, but my body was actually able to remain balanced without rigorous cardio sessions. Perhaps this was because without intense workouts each morning, my appetite decreased and I found myself eating much less throughout the day. I felt calmer, more focused, and so much more comfortable in my own skin. My body moved and existed peacefully; my stomach was just a stomach, not a failed six-pack.

Studies have shown that high intensity exercise causes an increase in cortisol, the body’s stress hormone, while low intensity workouts can actually result in a reduction in circulating cortisol levels. My intense exercise habits had been significantly contributing to my stress levels, and I was amazed by how much less anxious I felt once I cut back. The absence of locker rooms and competitive glances in mirrors helped me turn my gaze inward and focus onto my own body. My energy was steady and I became less and less fazed by the sweaty endorphin junkies I passed on the street.

Over time, I reintroduced a few high intensity workouts back into my routine — not out of guilt, but because I genuinely missed the endorphin rush I got from my favorite classes. I paid attention to how my mind and body responded to these workouts, and ditched the sessions that felt like a punishment for ones I genuinely loved, like dance and Pure Barre classes with friends. I began attending heated vinyassa yoga classes and relished the feeling of sweating in a room that was rooted in love, rather than competition.

Although body image will always be a struggle, in redesigning my relationship with fitness, I climbed out of my calorie-obsessed rut and discovered a new world of mental, emotional, and physical health. Today, I exercise when I want to, sleep in when I’m tired, and give my body the love and respect it deserves. I've been skinnier, but I've never been healthier.