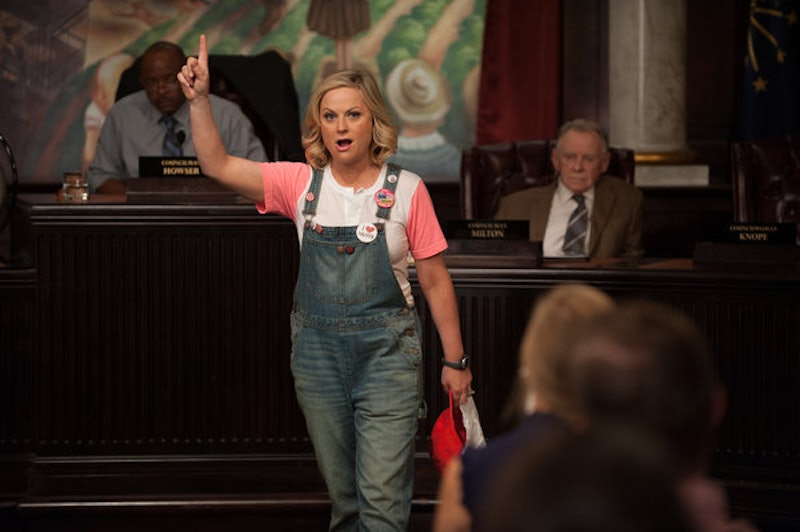 So America's favorite comedic television program — and if it isn't it should be — Parks and Recreation is finally coming back to television tonight. Hooray! Huzzah! Sound the alarms! Raise the horns! Release the hounds! (OK maybe not that last part.) After having to endure a three week long hiatus from our friends in Pawnee, Indiana because NBC is a bunch of meanie grumpkins, it seems that everything in our world that was wrong is now right again. Flowers smell sweeter, birds chirp chirpier, and everything was beautiful and nothing hurt.

But that also may be because we've already seen tonight's two new episodes on a visit to the Pawnee, Indiana set on Monday. I know, I know! I'm the ultimate Jerky McMeanerstein. It's a hard cross to bear: knowing all the secrets and holding all the answers in our not-so-tiny lady brain. But we've done it, because we care (and also because we were told not to squeal!) Since you've all been waiting with breath that is baited for the impending Pawnee boon, we've decided that, hey, maybe sharing a few tease-y bits of information in order to whet your appetite for tonight's main course wouldn't be so bad, would it? Here's hoping! Get ready, because it's going to be juicy.

So What can you expect from tonight's not one but TWO (Screw Ben Folds: we are the luckiest) episodes? Plenty! Such as...

The return of Tatiana MaslanyThe Internet's favorite clone and player of all of the parts, Orphan Black star Tatiana Maslany appears in the first episode of the evening and her relationship with Tom goes to, well, unexpected places. And we finally get to see her play the funny one.

So Many CostumesBetween the '90s birthday party and Halloween, there's a lot of dressage going on. Watch out for the stylings of Tom and Donna because theirs are truly a work of art. Oh, and I've got four more words for you: Adam Scott, Tiny Mustache.

Rollerskates...Turn out to be incredibly effective... for Ben Wyatt.

Wendy Davis Would Be ProudThere's a filibuster! And no, I don't mean Patton Oswalt's back.

More Kristen Bell!Things get even icier between Ingrid de Forest and Leslie Knope during her brief moment (but not the last!) towards the end of tonight's first episode.

Retta + Guns = Something too priceless to spoil.

A Shocking BetrayalOK, maybe not all that shocking (all parties considered), but still: betrayal is afoot and Leslie must make a choice between doing the right thing and doing what's best for her. Somebody call Olivia Pope because this shit is scandalous!

The Recall Vote: RevealedWhile we've been sworn to secrecy (and always abide by the law of Knope), the results of the recall vote are revealed in the second of tonight's two new episodes. Trust us when we say: you will not want to miss this.

Damnit, Larry!The artist formally know as Jerry... is still there.

Now do what any and all good Pawneean would do and demand that all of your friends tune in to tonight's two all-awesome, brand-new episodes of Parks and Recreation at 8PM ET on NBC or else the waffles get it!!