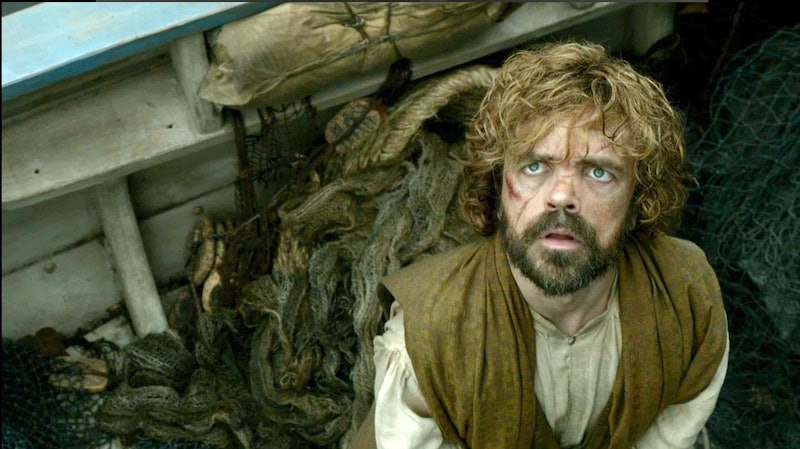 It's hard to believe, but the season finale of Game of Thrones is upon us. HBO should really take pity on us and give us more than ten episodes a season; the yearly withdrawals are becoming too much for me to deal with. A lot has happened during this season, but, like Jon Snow, I still know nothing. Despite all of the plotting and planning, no one seems all that much closer to capturing the Iron Throne. Even poor King Thom has abandoned his duties and drifted into despair following the imprisonment of his wife and mother. Showrunners David Benioff and D.B. Weiss have thrown a lot of information at us this season, and I'm not sure that I have the strength to even begin teasing everything apart.

Since the show has completely deviated from the books, we can hardly prepare for what Sunday’s season finale will bring us. Winter is near and supplies are scare, which can only suggest that whatever is going to happen needs to happen quickly. The only contender with any real plan seems to be Ramsay, and, for everyone’s sake, I do hope that whatever he has up his sleeve turns out to be a huge failure.

We all know that season finales usually bring chaos, and, from past finales, we can assume that no one is safe. Still, here are eight things that we might see in the upcoming season finale of Game of Thrones.

1. Arya Ends Her Quest To Be No One

Arya has found herself in Braavos under the tutelage of Jaqen H'ghar. After an extensive period working in the morgue, Arya is finally on her quest to become No One. However, we all know how precocious Arya is. While seeking revenge against a gambler, she spots Ser Meryn Trant getting off a boat. If you recall, Trant is on Arya's hit-list for his part in Ned Stark's death. Instead of following Jaqen's orders, Arya spent Sunday night's episode following Trant around. It seems that her quest to avenge her family's deaths has been rekindled, and, for that reason, she can never become No One; instead she must embrace her true identity: Arya Stark.

2. This May Be The End For Jon

Jon Snow, and what's left of the the Wildlings, have escaped from Hardhome and made it back to The Wall. Though Ser Alliser Thorne opens the gate for them, none of the Night's Men look too pleased with Jon or his visitors. The Night's Watch is already short on supplies, and these additional guests will surely cause a further strain on them. In George R. R. Martin's epic, the Night's Men attack Jon to prevent him from forming an alliance with the Wildlings. At this point in the series, Jon's hold over his men is shaky at best. Furthermore, the boy that the Night's Watch rescued from the Wildlings seems to be plotting some sort of revenge for his family's death. Only something extreme will change Jon's fate.

Whatever power Dany had in Meereen came to a devastating end Sunday night. It seems that her own betrothed had been plotting against her, which led to a bloody confrontation with the Sons of the Harpy at the Great Games. Had it not been for our favorite dragon, Drogon, Dany and Tyrion would have had met their end. It's time for Dany to reassess her plans and become the ruthless leader she was always meant to be. With Tyrion at her side, perhaps she still has a shot at the Iron Throne. By the way, what happened to all of her unsullied soldier ? They were nowhere to be found during that attack...

4. King Tommen Will Get Out Of Bed (Hopefully)

It's sad when a character makes you long for Joffrey, but King Tommen is beyond pathetic. During "Hardhome," we learned that, following Cersei and Margaery's arrests, Tommen has taken to his bed in a fit of despair. He seems to have forgotten that he's the King, and he's left his wife and mother's fates in the hands of The High Sparrow. King's Landing is in shambles and, if Tommen doesn't get out of bed, the Lannister reign will surely come to a screeching halt.

5. Jamie Takes The Throne (Kind Of)

Should King Tommen prove to be a lost cause, someone will need to take over the King's duties at King's Landing. Now that Jamie has been allowed to return home, it seems like he will be best suited for the job. How ironic, the Kingslayer will have come full circle. Still, if Jamie is able to get things at King's Landing back in order, Cersei will once again worship the ground he walks on.

I'm sure that this is just wishful thinking on my part because obviously Theon Greyjoy aka Reek is truly useless at this point. However, something has to give. I'm confident that Ramsay has some sort of weakness that we have yet to discover. If Sansa can somehow trick Reek into helping her, she may have a chance. If not, I'm not sure how long she will be able to survive her horrific new life in Winterfell. At the very least, Littlefinger needs to come back and get her away from her monstrous husband.

7. Stannis & The Red Woman Get What's Coming To Them

Stannis has never been a favorite of mine. However, after Sunday's episode, he is officially dead to me. Following an attack on his men, he gives in to Melisandre's command to murder his own daughter. As I watched Melisandre burn Princess Shireen alive, I realized how truly horrific Stannis is. Melisandre and The Lord of Light have led Stannis into the depths of hell, and now my only hope is that he meets a bloody gruesome end.

The final episode of Season 5 is aptly named "Mother's Mercy." We can only assume that this refers to Cersei confessing in order to be released from prison. I'm not sure that Cersei will ever confess to having an affair with her cousin, and, even if she does, surely she will suffer some terrible consequences. We will all have to tune in to the Game of Thrones season finale to see if any of these events, or all of them, come to pass.