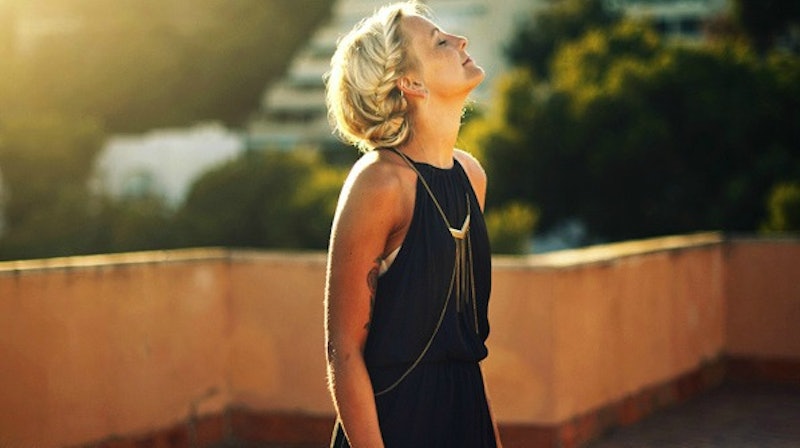 According to a new Gallup poll, young people are skipping out on not just marriage, but commitment in general. Not only is there a decline in people between the ages of 18 and 29 getting hitched, but the decrease in the amount of people living with a partner has also dropped drastically in the past 10 years. In 2004, 52 percent of people in this age group reported that they were single, but when 2014 rolled around the amount of single millennials had jumped to 64 percent. Basically, Millennials get it: There’s more to life than being in a relationship.

The poll also found that while the 30-something age group is less interested in marriage than they were 2004 (it’s down by 10 percent), more of them are living together. In fact the percentage has almost doubled, going from seven to 13 percent. However, 40-somethings remain pretty much unchanged. I guess no one wants to be fancy free forever, so when people are in their 40s they finally settle down.

But the best part about the 18- to 29-year-old group is that this trend isn’t specific to one ethnicity, region, or education level. Although Southerners are a wee bit less likely to be single than those in the other parts of the country, across the board, 20-somethings are bucking convention, living their lives, and doing so solo. Why? Because it’s awesome. How awesome? Here are seven perks of being single that prove you really don’t need to be in a relationship.

Remember that study Bustle covered last week about how it’s cheaper to be single? I mean, not to beat a dead horse, but with people in relationships spending just under $300 a month more than those who are single, why wouldn’t you hang on to your singlehood and your pennies as long as you can?

2. You Don't Have To Contend With Your Partner's Family Or Friends

When you’re in a relationship you have to deal with the people in your partner’s life. While the majority of them can be cool, there’s always that one friend they have who’s a totally asshole when they drink too much or that one relative who can’t stop asking when you two are going to have kids. It’s annoying, and there’s only so many times you can bite your tongue before you just bite the whole damn thing off. Being single means none of that — zip, zilch, nada — woohoo!

3. You Get To Have Lots Of Casual Sex

One of the downers with relationships is that you have to have sex with the same person, which, to be honest, can be a little boring after awhile, especially if you don’t make the effort to spice things up. But in being single you get to have one-night stands, try on other people for size, if you will, and if you’re someone who really enjoys casual sex then it’s actually good for you. Studies have found that for those who genuinely like casual sex, having it often can boost self-esteem and help with anxiety.

4. Your Time Is Your Own

You don’t have to get up early so you can have time in the bathroom to get ready for work before you partner takes over the shower, you don’t have to cancel your plans because they need you to attend some stupid work thing, and you don’t have to spend an entire three months planning their 30th birthday party. When you’re single you can shower as long as you want, cancel plans because you got sucked into a Netflix hole, and plan out your future, the one you promised yourself that you would have.

In addition to sleeping a la starfish style, as I like to call it, in bed alone, you’ll actually be better rested because of it. A study out of the UK found that one in four couples actually prefer to leave the bed they share with their partner for their own space. In being single, you don’t have to deal with kicking your partner to the couch because they snore like a wild banshee and you get to sleep, in peace, with no one hogging the covers, or draping their arms all over you every single night.

6. You Get To Spend More Time With Your Friends

Not only that, but you also get to bitch and moan with your friends about how one of your other friends ditched you for their new boyfriend. I kid! But seriously, having ample friend time and building relationships that aren’t romantic with people is essential to happiness. Sadly, studies have found that when people get married or move in with their S.O. they tend to let the other relationships in their lives fade away. Having close friendships is the ticket to happiness.

7. You Get To Be Selfish

When you're single everything is about you. It's not just about getting the bed all to yourself or having every second that's all your own. It's about living your life for you and you alone and, honestly, it's one of the best things in the world. Actually, it is the best thing in the world.