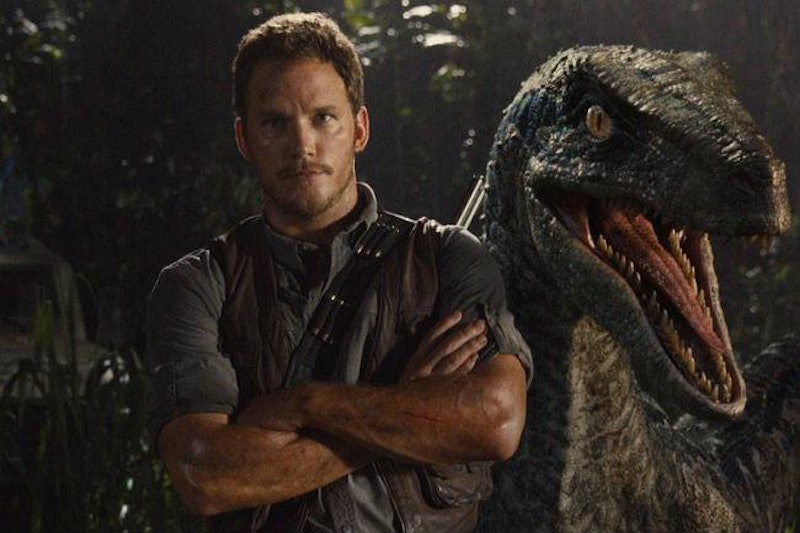 On a remote island in 2015, a theme park exists where spectators watch dinosaurs — animals previously extinct for eons — run wild, free to roam the grounds, and eat up everything (except their human visitors) in sight. There are T. rexes, velociraptors, triceratops, and more, even including a hybrid dinosaur built by the park's scientists to wow fans. It all sounds like the stuff of fantasy, or more accurately, the plot of a famous film franchise, right? Actually, not quite — although not possible just yet, the crazy events of Jurassic World could happen — someday.

According to Dr. Jack Horner, a paleontologist who has consulted on all four Jurassic Park films, the hybrid creature set to terrorize Jurassic World on June 12 could actually exist in the future — and he's working to make it happen. The Washington Post reported that ever since 2011, Horner has worked with a team of geneticists to alter the DNA of chicken, which he believes can eventually lead to a full, live dinosaur. At the time, he said that he'd be "surprised" if his plan wasn't completed within the next decade; there's still a few years left before the end date on his prediction, so the possibility of a tiny dinosaur roaming around Earth a few years from now shouldn't be counted out.

Scared yet? Don't be. Although Horner's plans are impressive, the idea of a full-on dinosaur rebirth is still not likely to happen anytime soon, or ever. In order to make their hybrid, Indominus rex , the scientists of Jurassic World combined dinosaur DNA with genes from other animals, but in reality, no DNA from the species currently exists. In order to create a similar creature, like Horner is attempting, a process of transgenesis (combining the genes of several animals) must occur, but due to the lack of DNA, none of those genes are able to come from dinosaurs themselves.

So while Jurassic World may be "more plausible" than its predecessors, as Horner has said, it's not exactly a crystal-ball prediction of the future. Still, there's no denying that the possibility Jurassic World presents is pretty terrifying. Here are three more reasons the new movie is going to be the scariest in the franchise:

The Velociraptors Are The Good Guys

Unlike the original film, where the velociraptors were the enemy, Jurassic World has the creatures actually protecting the humans from the monsters at large. In other words: Indominus rex is bad.

The Effects Will Be Even Better

The dinosaurs in the first three films were dangerous, enormous creatures with teeth and claws that looked terrifyingly realistic. That was the '90s. In the years since, CGI has gotten so much better — meaning that the animals in Jurassic World are going to be very lifelike and very scary.

It's All In The Hands Of Chris Pratt

Look, I was fully onboard with Pratt starring in Guardians of the Galaxy, and I've seen how much he's bulked up over the last year or two. But when it comes to saving the world, I'll always see him as Burt Macklin, F.B.I. — which, for those who didn't watch Parks and Recreation, does not bode well for anyone in his care. It might be a comfort to have Pratt by your side while dinosaurs attack, but your best bet for staying alive? Getting on the next helicopter that agrees to whisk the both of you off to somewhere safe, calm, and dinosaur-free.