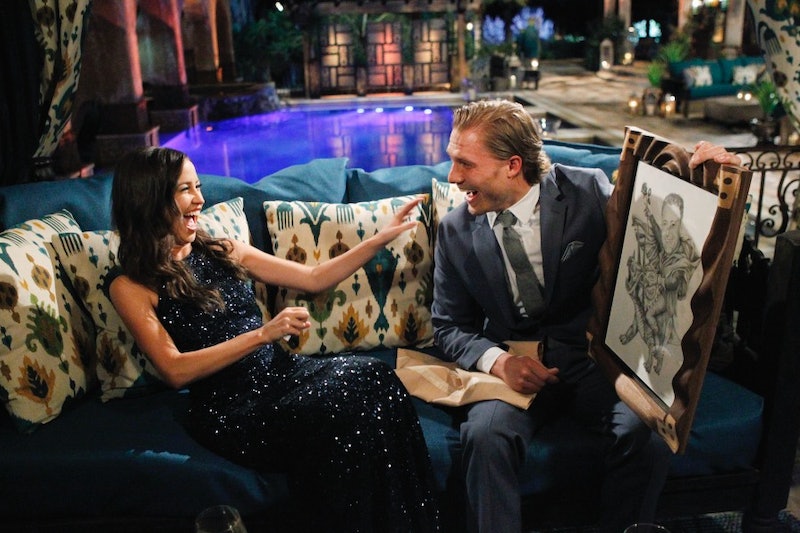 When The Bachelorette came back for its latest installment Monday night, we got dumped directly into the drama with the continuation of last week's storyline. Last week, Clint essentially tried to convince Kaitlyn he had feelings for her when really he wanted to stick around for his best bro, JJ — and with a little help with the other guys of Bach mansion, our girl saw right through him. Yep, it's official: Kaitlyn threw Clint off The Bachelorette , and not only did Clint lose that way, but he also lost what was truly important to him: His BFF.

At first, before Kaitlyn announced that Clint was going home, JJ was all about being there for his bestie. In fact, he basically told the rest of the guys that he would follow Clint into the depths of hell if he asked them to. But once he and Kaitlyn returned and she broke the news that Clint was dunzo, JJ totally changed his tune, promptly throwing Clint under the bus. He demanded an apology from his former bro for wasting everyone's time and emotion, and did a good job pretending to be pretty pissed and uninvolved in the whole thing. He's got to be pretending. This can't be real.

And for the record, JJ: Anytime you start a sentence with the words "as your friend," you're about to say something a friend would never say.

This clearly led to a heated argument between Clint and JJ, where JJ tried to backpedal and apologize for everything he said five seconds ago, but it was too late. It was over in Clint's eyes, and so was this whole terrible "Brokeback Bachelor" thing ABC has been forcing us to endure for the past couple of weeks. Unfortunately, JJ didn't take this so well, and immediately had a breakdown. Clint left, and JJ ended up inexplicably crying and slapping himself somewhere outside alone. So many WTF moments in such a short span of time!

I love that Kaitlyn's kicking guys off left and right as soon as she discovers their intentions aren't what they should be, but if this keeps happening, we're going to have a very short season. Um, maybe it's a good thing Nick Viall's entering the game, because these dudes are dropping like flies.