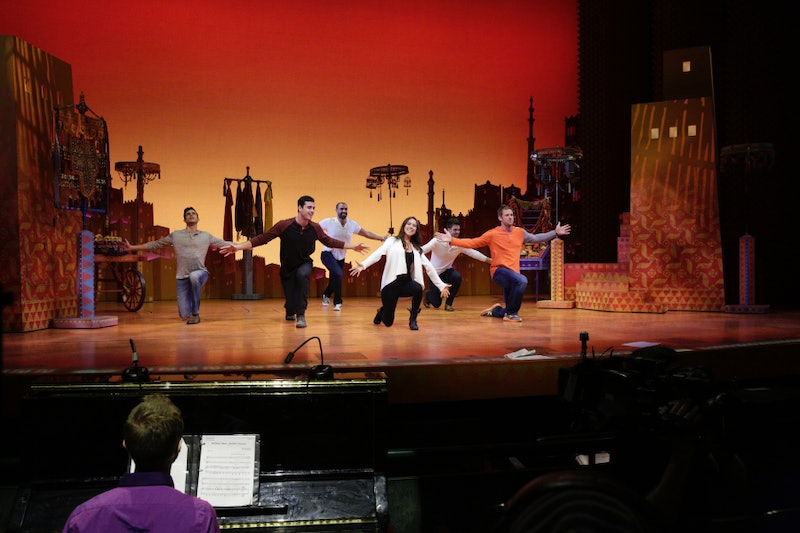 Another episode of The Bachelorette, another weirdly embarrassing performance. Seriously, what is it with Kaitlyn and publically shaming all of her suitors? First there was a rap battle, and then, Kaitlyn took her other group date dudes to be part of Broadway musical Aladdin. Kaitlyn was totally fangirling out at the prospect of being on a stage on the Great White Way, and I absolutely get it: I would have chained myself to the stage and no one could have gotten rid of me.

The gist of the date was as follows: Each guy would try out for one spot to appear with Kaitlyn on stage at a live performance of Aladdin. They literally had to audition, and man, was that painful to watch — I did it through my fingers. The only guy who could actually sing was Ian, but he was skipped over in favor of Cupcake Chris, who really went all out during his turn. He may have been overacting, but he sure overacted into our hearts.

Much to their chagrin, the other guys had to go right home to bed without supper to wait the arrival of Nick to the hotel. There was talking of angrily punching hay bales (by Joshua, who may not understand how few hay bales there are in New York City). Thems the breaks on The Bachelorette, you guys!

But, let’s forget about Nick for a second and continue on with Cupcake Chris. He and Kaitlyn appeared as a couple on stage in Aladdin (Kaitlyn was so, so excited and I was so, so jealous), and they got to bond a little bit, which was nice. It’s easy to forget how little time some of the bachelors have with Kaitlyn, and Chris was happy that he got a whole evening with her by himself. Next, Cupcake Chris and Kaitlyn had a total smoochfest at the Times Square Ball — you know, the one they drop on New Years’ Eve. Kaitlyn is feeling Cupcake Chris, you guys, and it's really sweet. (Yep, pun totally intended.)

More like this
‘The Bachelorette’s Michelle Young & Nayte Olukoya Explained Their Breakup
By Stephanie Topacio Long
Kris Jenner Drunkenly Toasts Khloé Kardashian’s 38th Birthday With This Speech
By Grace Wehniainen
Howard Stern's Net Worth: Is He The Richest Man In Radio?
By Hugh McIntyre
RHOA’s Kenya Moore Said Her Friendship With Marlo Hampton Is “Too Far Gone”
By Brad Witter
Get Even More From Bustle — Sign Up For The Newsletter