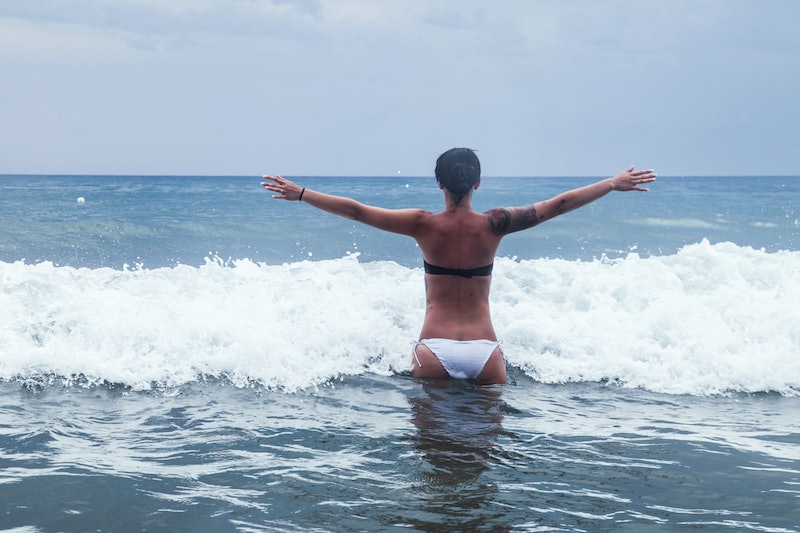 It's common knowledge that your online dating profile pictures have a huge impact, but a new study by auction-style dating site WhatsYourPrice.com sheds light on how certain kinds of pictures can actually affect your likelihood to get a date.

The study used data from its 50,000 most-clicked-on users to determine what type of pictures its most successful users were uploading to their profiles. While the average woman on WhatsYourPrice.com is offered a measly 120 dates during a six-month period (!!), she can increase her odds of getting a date tenfold with one simple solution: posting a bikini picture. Color me shocked.

Unfortunately, this data perpetuates the idea that women's bodies are worth more than their personalities, and that the best way to a man's heart is through his penis. If a woman shows off her body, it's appealing, at least until she shows too much confidence, at which point she is a "slut." Of course, I can't make a judgment call about all the users of WhatsYourPrice.com, but it is a little disheartening to see that by posing half-naked, a woman is suddenly much more likely to get offered a date.

Here's a list of three other things the study says will help women get a date (that you can feel free to ignore completely):

1. Posing with a drink in hand

This is one of the most unsettling statistics the study produced: Women pictured with a drink in hand were seven times as likely to get a date — which is reminiscent of the larger problem of alcohol-related consent issues. Sure, you could argue that a woman shown holding a drink might attract men because she looks "fun" or "carefree," but it could also mean that men are more interested in women who party because their inhibitions might be lowered, making them more likely to have sex (regardless of consent).

I totally understand the merits of travel, but it makes me sad to think that I am eight times as likely to get a date if I have scenic, worldly pictures attached to my profile in lieu of "boring" stateside photos. Personally, I am not the jet-setting type — that shit is expensive, and I don't want to be passed over simply because I can't afford to parasail in Bora Bora or bake macarons in Paris. No passport, no problem is my new motto.

Seriously, what's with the pressure to be feminine, especially in your online dating profile? Gender is a construct, people, and we shouldn't be three times as likely to ask someone out just because she's wearing a dress instead of a boss-ass pantsuit. Wear what you want, because any potential partner who is mature and worthwhile will ask you out even if you're wearing a turtleneck and mustard-stained sweatpants in your profile picture.

At the end of the day, the most important thing to remember is that you shouldn't have to present yourself a certain way to appeal to potential partners. While the study in no way suggests that you should feel obligated to upload any of these kinds of pictures, the stats are still an eye-opening reminder of the pressure and expectations placed on women to appear a certain way in order to be "desirable." As a human being with agency, it is not your job to appear a certain way in order to attract someone — you're desirable just the way you are. If you want to post a bikini pic, post a bikini pic. If not, that's totally OK too. I bet you'll get some amazing dates either way.

More like this
The Best Time To Date After A Breakup, According To Experts
By Bustle Editors
Hinge's New NFAQ Feature Is Demystifying Queer Dating
By Emma Carey
The Top Mistakes Scorpios Make In Relationships (& How To Avoid Them)
By Nina Kahn
12 Ways You're Sabotaging Your Love Life
By Teresa Newsome and Lexi Inks
Get Even More From Bustle — Sign Up For The Newsletter