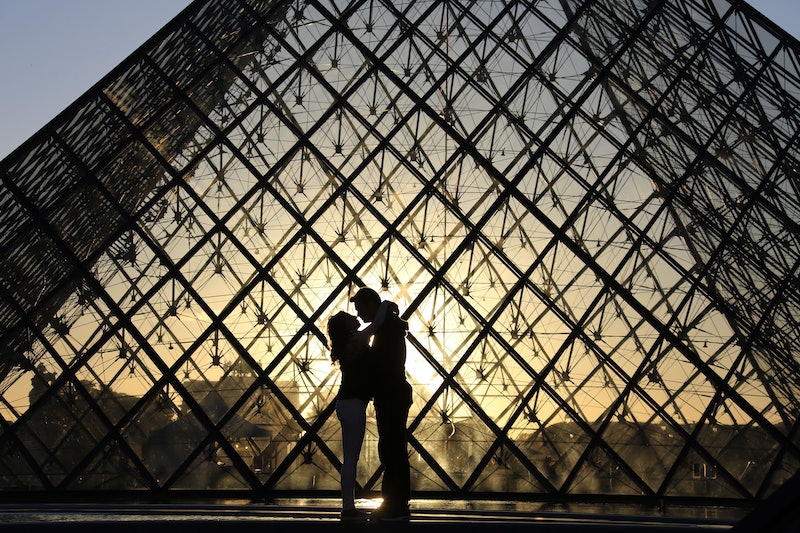 In 2013 and 2014, Aziz Ansari (yes, that Aziz Ansari, the comedian and actor who stars in Parks and Recreation) and his coauthor Eric Klinenberg, a professor at New York University, conducted a massive, sociological research study that included "focus groups and interviews with hundreds of people in New York City, Los Angeles, Wichita, Monroe (NY), Buenos Aires, Tokyo, Paris, and Doha." The subject of these conversations? Dating in the digital age, specifically how dating is different around the world.

A "comprehensive, in-depth sociological investigation" on the "many challenges of looking for love in the digital age" is not the book you'd necessarily expect from Ansari, but that's exactly what Modern Romance is. From L.A. to Tokyo, Ansari and Klinenberg traveled the globe, talked with researchers and regular people, and came away with many insights into how dating works today, all packaged with Ansari's quick wit and humor. (A quick note that this book mainly focuses on heterosexual relationships because Ansari and his coauthor quickly "realized that if we tried to write about how all the different aspects of romance... applied to LGBT relationships, we simply wouldn't be able to do the topic justice without writing an entirely separate book.")

"Culture and technology have always shaken romance," writes Ansari, but, "History shows that we've continually adapted to these changes. No matter the obstacle, we keep finding love and romance." So, here's how dating in seven different cities has adapted to the advent of digital technology:

"In the city with arguably the most options, New York City, people discussed how it was hard to settle down because every corner you turned revealed more potential opportunities." This density of young, single people means that online dating is insanely popular, "almost everyone in all the focus groups there used the sites," and Ansari heard stories "like the woman who was Tindering on her way to a date to try to find a better date afterward." This is probably why the average age of marriage in New York City is around 30, for both men and women, as compared to the national average of 29 for men and 27 for women.

Dating in L.A. is, in many ways, similar to dating in New York City. There are a lot of options available, both online and in person, so there's no incentive to really invest in any one relationship. As one of the L.A. focus group participants explained, you "could go out with someone and, if it went badly, be fairly confident [you] would never see them again. 'It was almost like they were dead. Like, in a way, you murdered them in your mind.'"

The biggest difference between Los Angeles and New York City, according to Ansari, is the difference between car culture and riding the subway everywhere: "Instead of walking in streets and subway stations full of potential options, I would be alone in my Prius filled with sh*tty gasoline, listening to a dumb podcast. I couldn't wait to get home and hold my girlfriend."

You know what's not at all like dating in New York or Los Angeles? Dating in Doha, Qatar. Casual dating is forbidden in Qatar, and public displays of affection can be punished by time in prison. Digital technology has helped create some workarounds, though. "With the rise of smartphones, social media, and the Internet, young Qataris are using technology to flout these repressive rules." These twentysomethings use Snapchat to send each other dirty (or not-so dirty) pictures, and text each other to organize co-ed parties in hotel rooms as a safe, private space to hang out, away from parents and the watchful eyes of neighbors. Although these technologies do allow for a bit more freedom when it comes to socializing and dating, "it's not necessarily making life easier."

Ansari wanted to go to Tokyo because of the ramen but also because he "assumed the tech-obsessed Japanese were probably on the next level of dating websites and apps. These people invented emojis, for god's sake!" It turns out his assumptions were pretty wrong. "Start doing even the slightest research into Japan and love, and you'll quickly find sensational articles describing full-blown crisis." The marriage rate is plummeting, to the point that the Japanese government is genuinely concerned the county will run out of people.

When Ansari looked at the stats, the picture only became more grim. "In 2013 a whopping 45 percent of women aged sixteen to twenty-four 'were not interested in or despised sexual contact,' and more than a quarter of men felt the same way...Seriously, read those numbers one more time. Despised sexual contact."

In a focus group, Ansari explored the term "herbivore men," which refers to "Japanese men who are very shy and passive and show no interest in sex and romantic relationships," and found that these herbivores instead looked for "relationship replacements," like cuddling cafés and sex robots and hostess clubs "where men go to a nice bar-type atmosphere and pay women to provide intimate personal service in a romantic but not explicitly sexual way." The appeal of these venues is that there's no fear of rejection, even for the shyest of men, and the seemingly endless list of relationship replacements lets these men "avoid putting yourself out there and having an actual experience with another person."

On the other end of the spectrum is Buenos Aires, a city where more than 60 percent of women "had experienced intimidation from men who catcalled them." In Buenos Aires, "Men are expected to be pursuers in what Argentines casually refer to as 'the hunt,' and the primary arena for such pursuits is the street." There's no real need for online dating because everyone is so forward all of the time; as one focus group participant put it, "If you're an Argentine woman, you don't need online dating to hook up with other people because men will be after you all your life." But even if they have a boyfriend or girlfriend, Argentines are always flirting and keeping an eye out for other options. A female participant in the group explained, "Just because you're on a diet, it doesn't mean you cannot check out the menu... I mean, just as long as you don't pick up that particular plate." The casual dating culture of Buenos Aires can be fun, flirty, and pretty exciting, but there's "an undeniably darker side, though, with unwanted aggression, manipulation, and infidelity."

While 84 percent of Americans think that infidelity is "morally unacceptable," only 47 percent of people in France have belief. In fact, France is the country with the highest rates of infidelity: "55 percent for men and 32 percent for women, according to the latest data." In his focus groups in Paris, Ansari wrote, "most of the French people I met said it's natural, if not inevitable, to see sexual novelty and excitement. They'd still get angry about cheating, but not in the same way we do in the States. They don't judge the transgression so harshly."

Although that might be a healthy way to view cheating, there gets to a point of absurdity. "One woman told us that her uncle use to quietly take the bones from his wife's meat dishes to feed the dog of his mistress, and eventually [the wife], annoyed by the charade, simply started bagging the bones for her husband's mistress herself." Ansari writes (from the perspective of a French dog, which makes a lot more sense if you've read the book), "I admire the French for embracing honesty and their sexual nature, but there must be a middle ground between unrealistic monogamous expectations and full-on second families"

"A quick Google search," writes Ansari, "will show you many articles saying Wichita is one of the worst dating cities in the country... There is a low proportion of single people and strikingly few venues where single people can gather, places like bars and coffee shops. The town is quite isolated and doesn't get much traffic from other towns." There are several problems with this set-up, from the lack of options to the pressure to settle down by their late 20s. "This stigma of being unmarried in your late twenties was never expressed in any of our focus groups in bigger cities." But when you know everyone in your social circle, and have only a couple degrees of separation from anyone else, it's hard to keep going on new dates. Instead, "They are more invested in the deep commitment to the relationship," which Ansari says, "was a beautiful thing to hear." So maybe we should all be a little bit more like Wichita.