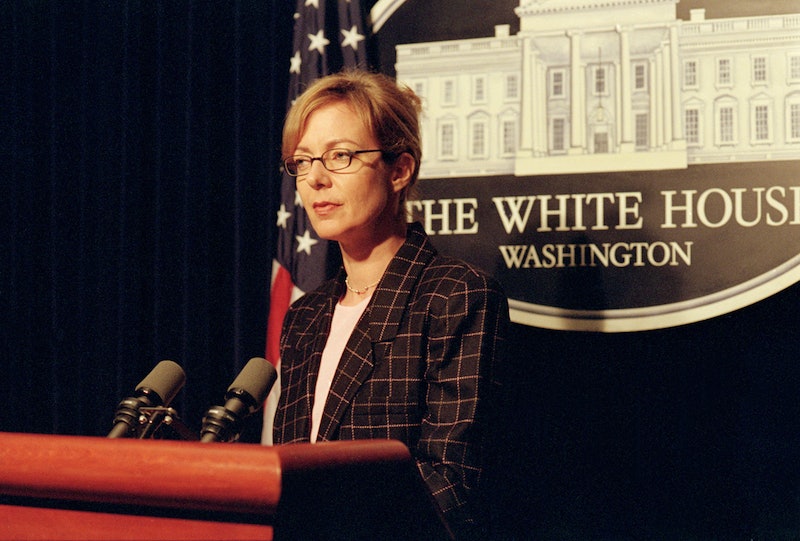 When it comes to fictional White Houses, movies and TV run the gamut. There are the administrations you'd never want (Selina Meyer's time in charge on Veep, or the scandal-plagued world of, well, Scandal), the ones you can only dream of (Geena Davis as a female president on Commander in Chief), and the ones you hope are far, far from the truth (Billy Bob Thornton, get your Love, Actually hands off Natalie!) But of all the White Houses that've graced screens over the years, none have been as memorable as the presidency portrayed on NBC's The West Wing as commanded by dream-leader Jed Bartlet (Martin Sheen).

Not only was Bartlet a fantastic president, ensuring America's prosperity and solving all crises with a well-timed speech, but his staff was one of the best TV had ever seen: a whip-smart, dedicated, lovable group of people who ran his White House as smoothly as possible. All of the administration's members were memorable, but none as much as Press Secretary C.J. Cregg (Allison Janney), who was hands-down the smartest, funniest, and greatest member of the Bartlet White House.

And while none of us will ever be quite as cool as C.J. (except for maybe Janney herself), there are plenty of people who follow in the Secretary's footsteps, purposely or not. Always feel ahead of the curve? Frequently burst into song and dance? Really, really like goldfish? Here's how to know if you're the C.J. of your office:

1. You're Constantly Explaining The Obvious

You work with a lot of smart people, but sometimes, they just don't get things quick enough. That's where you come in, always there to patiently (or not) tell them what they need to know. Honestly, it's like they're not even trying.

2. You Have Some Secret Skills

People think they know everything about you, but you still have a few tricks up your sleeve — and you know the perfect moments to let them free.

3. You Hate Your Nickname

Why can't your co-workers just call you by your real name? It's so humiliating.

4. You Put Your Job Before Everything Else

When it comes to your work, you're as committed as it gets. As for things like romance, fashion, or recovering from surgery? You try to care, but you just don't have time.

5. You Always Get Right To The Point

No one has time to play games, especially not you.

6. You Don't Do Stupid Questions

Seriously, people. Focus on what matters.

7. You're Always Ahead Of The Trends

Cookie Lyon who? You may not be that into pop culture, but somehow, you always know what's in style.

8. You Care A Little Too Much About Your Job

So what if you work non-stop and have little-to-no social life? You're good at what you do, and it's important stuff. People just have to deal with it.

9. But You Get Frustrated When People Forget You're Human

Yes, you work a lot. But you're also a human being with a life, a fact your colleagues tend to forget.

10. You Feel Like You're The Only One Who Speaks The Truth

Someone has to say it, right?

Just because you're focused on work doesn't mean you don't know what priorities are. When it comes to the big stuff, you always know what comes first.