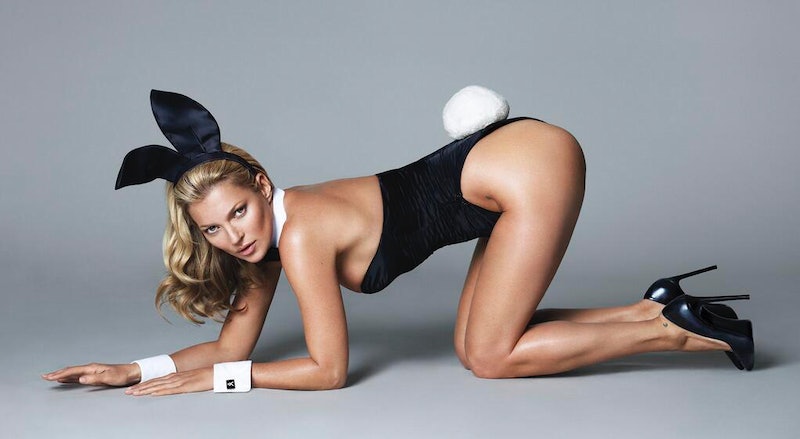 Playboy may not be your go-to newsstand purchase, but you might be more tempted to pick up an upcoming issue of the publication: Kate Moss will be featured in Playboy 's January/February 2014 Issue, and as a delightful surprise, the magazine just released a preview of the piquant photo spread.

Moss’s Playboy debut has already sparked a vigorous discussion online, with commentators questioning whether the shoot is empowering or a repeat of the “Blurred Lines” debacle. Moss is not exactly known for her chastity in the face of the camera, but toeing the line between liberating and downright submissive in such a controversial publication is a risky move.

Playboy's legendary architect Hugh Hefner told the Daily Mail he feels that the spread will in fact be tasteful, due to Moss's reputation as a couture darling and a household name:

She's a worldwide celebrity and iconic and crosses the boundaries from sexual imagery to upscale modeling. It's a natural for us.

BlackBook's Alyssa Shapiro applauds Moss for proudly displaying her body at an age when many women eschew even mini skirts:

A very happy 40th birthday to the every-glorious Kate Moss, who chose to commemorate her milestone with a nude shoot for Playboy.

At The Daily Caller, writer Taylor Bigler faults both Moss and Playboy for the photo spread, which she believes will cause a social media frenzy despite Moss being insignificant and the magazine a relic of the past:

Jimmy Jellineck, editorial director of Playboy, seconded Hefner's statement and cited a mutually beneficial union between the magazine and the model as reason enough for the photo spread:

This is a massive global brand. You need a global icon to celebrate that...You're talking about the face of Burberry, the biggest supermodel in the world on the cover of Playboy. She's the perfect partner for us to help launch the next 60 years.

Whether or not the rest of the photo spread will live up to the first image's racy precedent remains to be seen, but Playboy is certainly still living up to its notorious reputation in its 60th year. And the Internet seems to be largely supportive of Moss for rocking a corset and bunny ears at the ripe age of 39, so here's hoping ageists everywhere take note and allow 40-year-olds the occasional mini skirt.