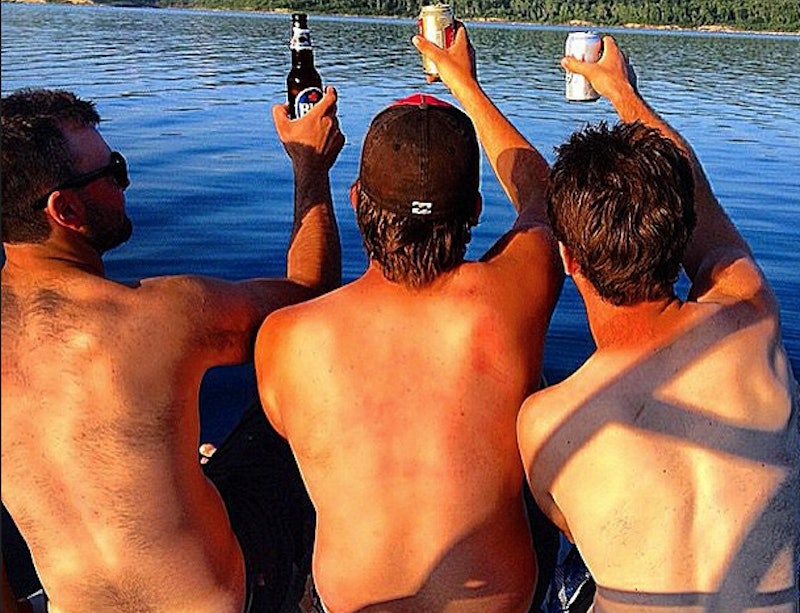 If you've ventured onto the Internet at all in the past few weeks, chances are you've come across the term "dad bod," aka the body-positive online movement celebrating the average male physique. Continuing its meteoric rise to prominence, there is now an Instagram account, That Dadbod Tho, documenting the men who aren't ashamed of their beer bellies, love handles, or other such imperfections in the eyes of society. Is it surprising? No. Because of course there's an Instagram account devoted exclusively to dad bod.If you aren't familiar with the movement yet, here's the TL;DR version: "dad bods" skyrocketed into fame after Clemson University student Mackenzie Pearson published an essay entitled "Why Girls Love The Dad Bod" in The Odyssey. Loosely defined by Pearson as "a nice balance between a beer gut and working out... not an overweight guy, but [not] one with washboard abs, either," dad bod quickly caught on as a way to celebrate men who are a little more James Corden than David Beckham. As with every Internet phenomenon, however, a backlash was ready and waiting to happen. In this case, many have pointed out that as awesome as it is for average men to love their imperfections, women don't get that luxury. As Sarah Sweatt Osborn wrote in the Huffington Post, "dad bods" are symptomatic of a double standard for male and female bodies. Beer bellies on men are seen as adorable "precisely because their worth isn't as intrinsically tied to their appearance the way a woman's worth is," whereas women are subject to constant pressure to maintain a perfect bikini body even after giving birth. As a result, women began using the hashtag #Mombod to fight back on Instagram and Twitter, showing off their C-section scars, stretch marks, and other imperfections. "Dad bod," however, doesn't appear to be going anywhere, and nothing illustrates that better than the That Dadbod Tho Instagram account, which collects pictures of beer-chugging, hard-partying average men worldwide.

The account's profile picture, by the way, is a scantily clad bikini model, because of course it is. For the most part, however, the posts consist of what my father would call "regular fellas" in various states of sobriety and dress.

There's absolutely nothing wrong with men celebrating their bodies — body acceptance isn't just for women. The question must be asked, however: Where is the "mom bod" Instagram account? Men like Jason Segel and Adam Sandler are still (dubiously, in Sandler's case) successful despite bodies that don't fit the rock-hard Calvin Klein model ideal, but as soon as a woman puts on weight, she can expect to be ridiculed and scrutinized until she "fixes" her body. The standards for women are, frankly, impossible to achieve. Somehow, we're supposed to have a baby but also a career; go to the gym regularly but also maintain the energy for wild sex at any moment; put effort into our appearances but don't display vanity; the list goes on and on. Perhaps, though, the "dad bod" trend signifies a relaxing of standards for men and women everywhere. If not, we'll just have to keep appreciating our own "mombods" until the rest of society catches up.