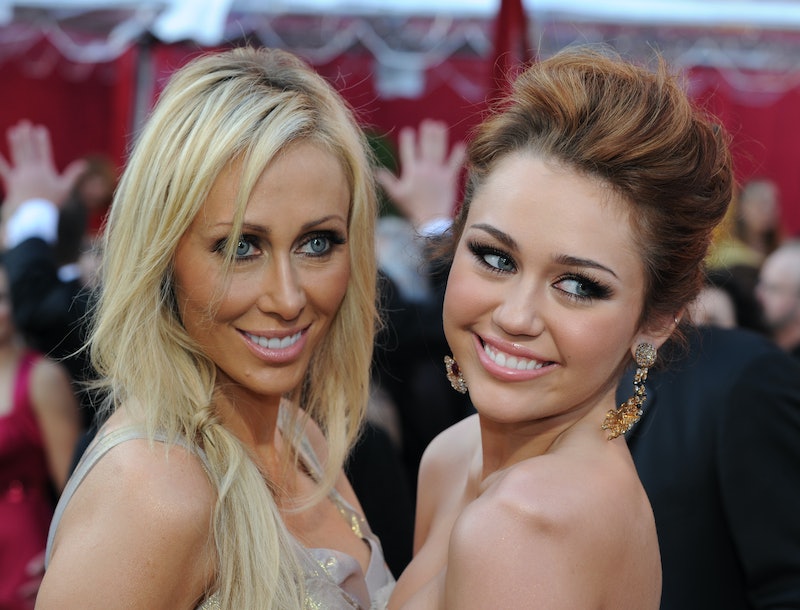 As Will Smith once eloquently put it, "Parents just don't understand." Or, rather, they try to, but sometimes fall short. Some children though, are fortunate enough to have parents who are willing to expand their minds and go outside of their belief systems or preconceived notions in an effort to understand their kids, because their love for them trumps everything else. And, it appears that Tish Cyrus is one of those parents. In Miley Cyrus's recent interview with Paper Magazine, she talks about her bisexuality and explains that telling her religious mom about this was a real revelation.

Regardless of the initial difficulty, Tish's acceptance of her daughter for who she is is what really matters. Not all parents and children who are at odds on their beliefs can find such secure common ground based on love, but it's clear that the Cyrus women have found it and that it's a part of what makes their relationship so special.

Here are seven other instances that show the pair's special relationship.

1. When Tish Was Vocal About Her Support Of Miley's Happy Hippy Foundation

But really, it's hard to find an instance where the elder Cyrus isn't supporting her daughter.

2. When Tish Made Sure To Commemorate Miley's Beloved Late Dog's Birthday

In Miley: The Movement , Tish proclaimed, "Anyone that’s ever said, ’Where’s her mother?' Right beside her — through good, through bad, through arguments, through crying, through I don’t care what — right there."

4. When Miley Captured This Adords Video Of Her Mom Dancing During A Family Hang Out Session

No family is perfect, but this particular moment definitely is.

5. When Miley Penned This Beautiful Birthday Shout Out For Her Mother (Aka Her Identical Twin)

The love is so apparent.

6. When Miley Captured Her Mom Being A Nuturer In Action

7. When Tish Appreciated Miley's Short But Sweet Note More Than Her Epic Gift

It's definitely the thought that counts.

So, as you can see, Miley and Tish Cyrus are without a doubt, mother/daughter relationship goals.

More like this
17 Years Ago, 'Hannah Montana' Reportedly Almost Cast This 'Gossip Girl' Star
By Grace Wehniainen
Selena + Chef Season 4 Was Filmed At Hannah Montana's Old Malibu House
By Jake Viswanath
At 14, Tatiana Maslany Was Obsessing Over Tamagotchis & The Spice Girls
By Gabrielle Bondi
Beyoncé & Madonna’s “Break My Soul” Remix Honors A Group Of Black Icons
By Stephanie Topacio Long
Get Even More From Bustle — Sign Up For The Newsletter