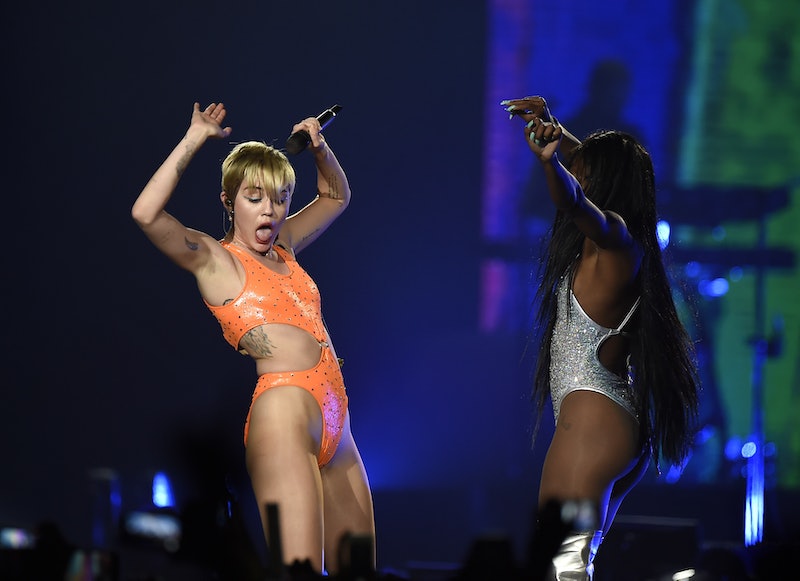 One again proving just how empowering an inspirational of a force she is, Miley Cyrus opened up about her sexual fluidity in a new interview with Paper magazine. With the interview — in which she talks about discussing her sexuality with her mother when she was 14 years old — Cyrus is truly attempting to spread a positive message. However, her quotes in the Paper interview aren't the first of Cyrus' that were inspiring and sex-positive — the singer has often worked hard to promote a positive approach to sex, gender, and identity. Cyrus is all about that unconditional love and acceptance, has long been an advocate of LGBTQ rights, and has always been a relentless supporter of body positivity and sexual liberation — hopefully, her attitude will rub off on others.

Despite the naysayers who may write her off, Cyrus is broadcasting a message that's so important — sexuality and sex itself is not something that should be considered shameful, and Cyrus' words inspiration will hopefully be an anyone struggling with their sexuality and identity. Here are some of her other most sex-positive, empowering quotes:

1. "I am literally open to every single thing that is consenting and doesn't involve an animal and everyone is of age. Everything that's legal, I'm down with. Yo, I'm down with any adult — anyone over the age of 18 who is down to love me. I don't relate to being boy or girl, and I don't have to have my partner relate to boy or girl." — Paper Magazine

She might not always say it in the way we expect her to, but we can always count on Cyrus to preach self-acceptance and never being afraid to be who you really are.

2. "Imagine finding someone you love more than anything in the world, who you would risk your life for but couldn't marry. And you couldn't have that special day the way your friends do ... Just put yourself in that person's shoes. It makes me feel sick to my stomach." — Glamour

Cyrus has long been a very active voice in the push for marriage equality.

3. "Everyone said I was a lesbian but I'm like, being a lesbian isn't a bad thing. So if you think I look like I'm a lesbian, I'm not offended. You can call me much worse. Being a lesbian is a compliment." — Huffington Post

The haters will have to get more creative if they want to ruffle Cyrus' feathers.

4. “I don’t ever really plan to offend people, um, but sometimes that just happens because I think people — you know, they’re not open to what they don’t understand. That’s why what I’m doing is for my fans.” — The Today Show

Cyrus encourages her fans to open up their minds and be accepting of everyone.

5. "Girls who base how much they're worth on the sexual favors they can do for somebody, that makes me really sad... Because sex is actually really beautiful." — Us Weekly

People are so afraid of talking about sex and Cyrus is keenly invested in starting a dialogue and spreading a healthy attitude about sexuality.

6. “This is who I am. I think it’s only hard if you’re trying to be something you’re not. Being who you are is really easy.” — The Today Show

Her style might be outrageous to some, but she's always true to herself. We should all take a page out of Cyrus' book on this topic.

7. "It’s like, I know you’re going to look at me more if my [breasts] are out, so look at me. And then I’m going to tell you about my foundation for an hour and totally hustle you.” — Associated Press

I've always though that Cyrus is such a fascinating individual because she so clearly knows exactly what she's doing. She very consciously chooses to shock people and pushes them to pay attention so she can get her real message out.

8. “I can go to [my parents] with pretty much anything — a lot of kids have to hide things from their parents and I don’t have to because my parents are just accepting. That’s what real love is.” — The Today Show

Real love is accepting each other.

9. "It's the only way that we create and it's the only way that the world keep going. It's ignorant to not talk to your kids about it or make it seem like it's not as cool or magical as it actually is. If [kids] have a TV, they know what sex is. Everyone knows, so educate them." — Us Weekly

We need to stop being so afraid to be open about sex.

Cyrus is constantly an inspiration, and these quotes of hers couldn't prove it more. You go, girl!