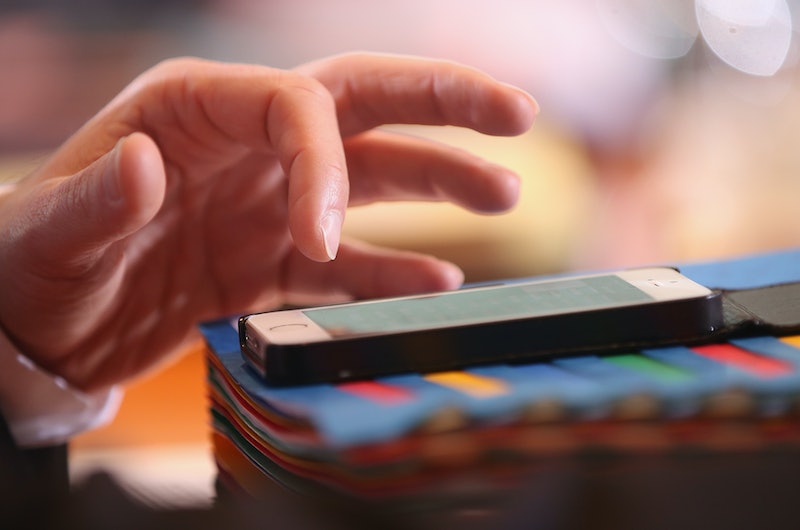 I got dumped pretty badly at the beginning of my fall semester, which resulted in me going on a serious Tinder kick. While I did, admittedly, have a lot of mediocre conversations and a lot of mediocre sex during this Tinder-fueled time, I actually met some really cool people as well. Although everyone seems to give a lot of crap to dating apps, I generally had pretty reasonable experiences. I say "generally," though, because my final Tinder dating experience before I decided to take a very serious hiatus from the app... didn't end well. I'll just go right out and say it: I had a Tinder stalker, resulting in everything from unwanted communication to harassment and from threats to police involvement.

Our first date took place at a small falafel shop in Downtown Boston, and although I didn't know it at the time, a series of red flags emerged during that date which I later realized I had missed. She told me her ex had dumped her because she was "too possessive" (she actually made the air quotes when she said that), controlling, and irrational. She also told me that someone almost filed a restraining order against her once for trespassing while she was under the influence of a variety of substances. In retrospect, I should have known then that this girl was going to be trouble. But somehow, these details got ironed over while her attractiveness and otherwise normal (and cool, if somewhat intimidating) demeanor held my attention. She seemed like she was on the same page that I was: Recently dumped and therefore not looking for anything serious — just trying to party, have lots of sex, and then move on.

Of course, it rarely turns out to be that simple, and this was no exception. After falafel we went to a cheap dive bar, got a little drunk and flirted recklessly, and ended up going home to her apartment. After several hours of sex, she got pretty tuckered out and fell asleep, but not before I told her I was going to head out. When she started snoring, I got in a cab and headed back to my apartment.

Here's where the trouble began.

I woke up around 11 AM and saw that I had 10 missed calls from the girl whose apartment I had left about six hours ago. Worried that I had left something there, I called her back to check on what it could be. She answered after the first ring and started yelling at me, nearly crying into the phone, "Do you know how rude it is to leave someone's apartment without telling them first? I woke up and was worried sick! Anything could have happened to you! You didn't even leave a note or text me when you got home!"

First of all, excuse me? Not only did I tell her I was leaving (to which she responded, "Sure, let me call you a cab"), but I also felt like it was ridiculous that this girl who I had just met would call me, yell at me, and experience a significant amount of distress over my whereabouts. While I thought she was being slightly ridiculous, I did take into account the fact that we had been drinking; it's possible she just forgot and felt disoriented in the morning. Plus, it's fair to worry about someone's safety, so I gave her the benefit of the doubt. I apologized for not being clearer with her and agreed to see her again that evening.

We had dinner again, although I didn't drink (I thought it might be best to avoid alcohol this time around), and for the most part the conversation was pretty normal. I did, however, notice that she had started complimenting me excessively on my physical appearance and intellectual abilities — which I thought was strange for the same reason I thought her reaction to my having left her apartment was strange. She had only just met me and didn't really know much about me beyond the basics, so the comments felt off. In fact, it spiraled so out of control that I got uncomfortable and asked her to stop. She did — but before she did, she also made a comment about how she felt like she could really fall for me if we kept seeing each other.

If this story was a Saturday Night Live sketch, this is where there would be a record scratch sound cue, because that's not what I wanted to hear. We paid our bill and I reluctantly took her back to my apartment (first mistake), had sex with her (second mistake), and let her sleep in my bed (third mistake). Why did I take her home with me? Partially because I didn't know quite how to reject her to her face, and partially because she told me her roommate was gone tonight and she was nervous about being home alone.

The next morning, I woke up and decided to tell her we shouldn't see each other anymore. I said, "I don't want anything serious, and you seem like you could get serious about this." She started fuming and accusing me of leading her on, despite the fact that I'd been clear about my priorities on the first date. She also accused me of just being out to get her and to cause her stress. She left my apartment after that, but texted me a few hours later to apologize for her behavior. I told her that it was OK, but also that we shouldn't see each other or talk anymore — which I thought was going to be the end of it.

But it was not. The next day, my doorbell rang in the early hours of the morning, and when I went to answer it, she was standing there with a dozen roses and a bottle of white wine. Though for a fleeting moment I was touched by the gesture, the feeling quickly passed, leaving irritation in its place. I had told her that I was no longer comfortable seeing her, and yet she showed up at my home anyway. I turned her down, asked her politely to leave, and she stormed off in a huff.

The same thing happened again the next morning, except this time she came with a plush blanket that looked recently purchased and a DVD of Enchanted, which I had previously mentioned was my favorite movie. I turned her down again. The day after that, she showed up on my college campus and waited for me in the cafe where I always did my homework. When I caught sight of her, I immediately left to catch the subway home. She then followed me onto the subway, asking for forgiveness and another chance. I was annoyed to say the least, so I got off the train early and headed to a friend's apartment, where I told her she wasn't welcome.

This happened for an entire week before I decided to call the police. She would come to my apartment, find me on campus, come to my retail job, hang around the ice cream shop by my house, and wait at the subway station I used to get into the city. She would always make her presence known, so she never snuck up on me; however, since I had made clear that she made me uncomfortable, her behavior demonstrated a complete disregard for my own sense of safety. I finally called the police when she threatened to hurt herself if I didn't answer my door.

Here's the thing about stalking: It all comes down to consent. If someone has explicitly expressed discomfort and/or said "No, I do not wish to see or communicate with you any longer," they have not granted their consent for you to have a relationship with them — and insisting on continuing a relationship without their consent is therefore a complete violation of space and body. As is the case with sex and physically intimate situations, a single-time "yes" when it comes to hanging out, spending time with one another, seeing one another in either a platonic or romantic way, or anything else of that sort, does not mean a standing "yes." I didn't feel comfortable or safe continuing to see this girl, so I firmly told her to leave me alone. That should have been the end of it, but she didn't listen — instead, she continued to seek me out, making it an explicit breach of consent.

The moral of the story here is not that you shouldn't use Tinder, or that all strangers are stalkers waiting to happen, or even that you should wait to have sex with someone you meet. The lesson I learned from my experience is this: It's OK to meet new people and make new friends, whether it's by using a dating app or not — but it's always worth being careful about sensitive information like home addresses, phone numbers, and details about your school. Online dating has become so common that we don't often consider these things when we set up our latest Tinder dates. But when you give other people access to places that are supposed to be safe and yours, anything could happen — and if this incident taught me anything, it's that you never really know what someone else is thinking.

This isn't to say that anyone who suffers at the hands of a stalker is to blame for their situation; far from it. It's a familiar argument: We shouldn't teach people how not to be harassed, we should teach people to not harass. But until we live in a world where people know not to harass, we can make it a less threatening place for ourselves by taking charge of our own safety and making sure that the power remains firmly in our own hands. It turns out, mom was kind of right: Be careful around strangers. Trust is earned.