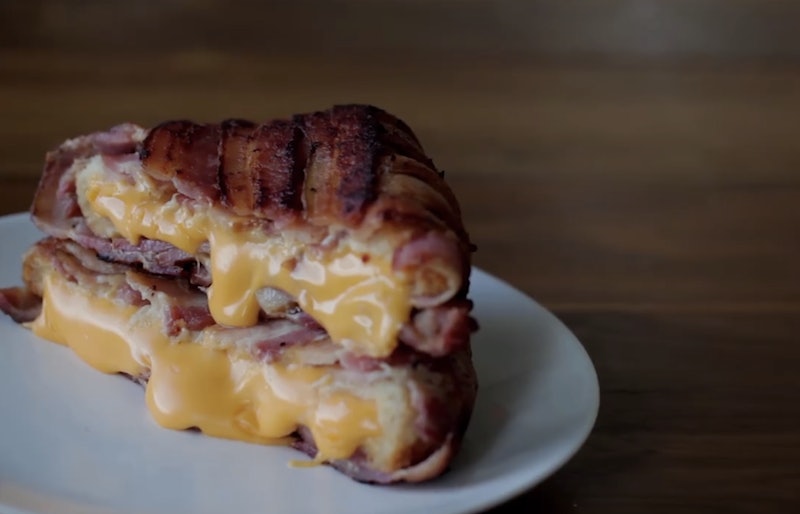 Imagine, if you will, a perfect world where a bacon-wrapped grilled cheese sandwich is not only a thing that exists, but a thing you can make and devour whenever the fancy strikes. It's a world without hanger, a world full of hope. It's a world where anything is possible. And thanks to the indisputably brilliant food minds at BuzzFeed Food, this world has become reality.

That's right — a bacon-wrapped grilled cheese sandwich is officially a thing, and it's basically exactly what you would expect. To make this intimidatingly perfect sandwich, BuzzFeed provides the hungry and courageous with a few simple instructions: Make a cheese sandwich, wrap it in bacon. Then, wrap it in more bacon. Then, plop the whole thing in a frying pan and sear it on both sides until you've reached crispy, golden, mouthwatering perfection. Cut in half, and try not to get grease in your eyes as you wipe away the tears of joy streaming down your face. Seriously, it's that simple. Sure, this sandwich is not for the faint of heart, but even if you don't like bacon (weirdo) and even if you don't like grilled cheese (weirdo), chances are you can appreciate this sandwich for being the culinary masterpiece that it is.

Wanna see this baby in action? Check out BuzzFeed's insane video. (Warning: do not watch if you're feeling even the least bit hungry.) (Double warning: you will not be the same person after seeing this.)

Of course, this isn't the first time bacon made foods we previously believed to be perfect even more perfect. Need I remind you of a little thing called bacon-fried Oreos that sent the Internet into a tizzy but mere months ago? Or bacon-wrapped s'mores, mozzarella sticks, and cinnamon rolls? It's an exciting time to be alive right now, bacon lovers. That's all I'm saying.