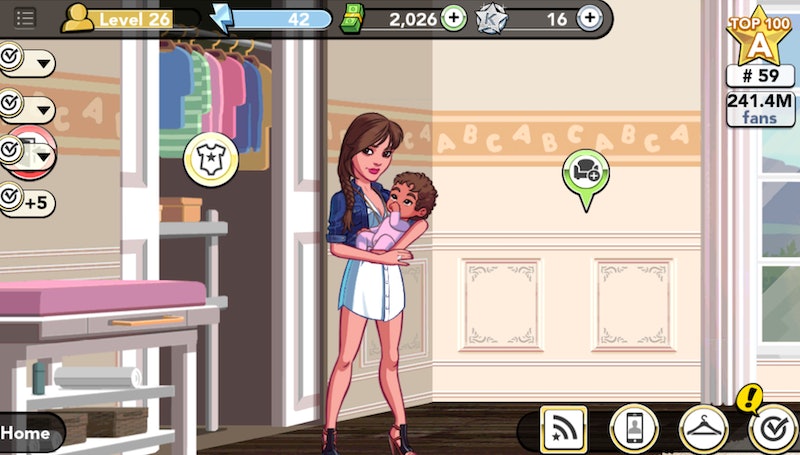 Big things are a-happenin' over in the mobile land of Kim Kardashian: Hollywood. Last week, there was a major game update. Said major game update added a bunch of new characters to the mix. And just as that Glu Games tweet-nnouncement promised, the new characters are... BABIES. THEY'RE BABIES. (A high-five and a "COWABUNGA" to you if you got that reference before clicking the link.) Have I had a chance to fully explore the new update? Unfortunately, no. Due to both a lack of a relationship and insufficient K Stars (i.e., the only two ways to have a baby in this game), my KK: H character has yet to become a mother.

However, fellow Bustler Martha Sorren recently welcomed a new addition into her avatar's life. UGH, SHE'S SO LUCKY. When I asked for deets, Martha didn't say "Tough noogies, chump. I'll never spill the KK: H baby secrets." Kind human that she is, Martha told me what the KK: H baby life is all about. Sent me pics and everything. A true hero.

So, what happens when you decide to have or adopt a baby in Kim Kardashian's iPhone game? Allow me to share with you what Martha shared with me:

Kim throws you a baby shower

A nursery is added to all of your homes

You say "completely free of charge," I hear "it's all included in the insane price of 160 K Stars." I reckon that's what they call "perspective," eh?

You get to name the baby

I'd pick the name "Kim." The baby would be named after my avatar, who is named after Kim Kardashian.

You can decorate the baby's nursery

Please take note of the beautiful giraffe Martha picked out for the baby's bedroom.

You can pick out the baby's outfits and hairstyles

I must say, that captain's hat was an excellent choice.

If you can read the baby's mind, you're rewarded with a lightning bolt