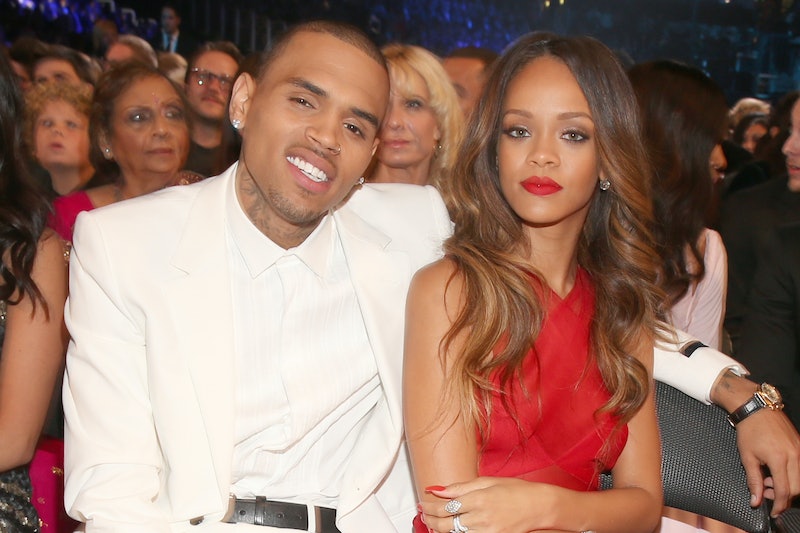 Life works in funny ways sometimes. Like right now: Just when I thought I had seen the worst fanfiction ever written in Fifty Shades of Grey — which was, of course, originally based off of the equally horrible Twilight book series by Stephanie Meyer — someone goes and writes something that's even worse. I'm not sure what could have possessed someone to think that writing a fanfiction about Chris Brown and Rihanna's abusive relationship would be a good idea, but clearly there is a person like that in the world because Fifty Shades of Sin by "J. Lola" exists.

"From the moment they meet, their attraction is explosive," it continued. "They fall hard for each other. They crave each other every minute of the day. However, they just cant be together... this is a story about love, but it explores the difficulties, sacrifices, and pain that love brings as well."

WELL, ACTUALLY, it's a story about an abusive relationship that should, in no way, be compared to love. A few details from this story via Radar, to back me up:

And when Robyn does meet him, there are even more red flags. At one of their first meetings, Chris threatens to break the hand of a bystander who gets in the way of their budding romance. Instead of being concerned, Robyn says, “I tried to imagine how glorious his muscular 6’4″ frame would look naked.”

The fact that the author uses the word "utterly ashamed" to describe how Robyn feels about being attracted to someone should be reason enough, but there's still more:

After they have sex for the first time, Chris gives Robyn one more chance to get out of their relationship. “I’m f*cked up,” he warns her. “Really f*cked up.”

And here's a part of the excerpt that the author included on the Amazon.com page, to attract REAL READERS:

So, basically, this whole thing is just glorifying an abusive relationship. It even promises to break down exactly what happened on the night that Brown assaulted Rihanna: "Follow more of Robyn and Chris’ story, all the way down to what happened that sad night of the Grammys."

It kind of sounds like whoever this "J. Lola" person is watched the music video for Rihanna's "We Found Love," which clearly depicts an unhealthy relationship, one too many times. Look, no matter how many fans as 50 Shades of Grey and even Twilight has, it doesn't change the fact that both books are clearly glorifying abusive relationships and convincing women that it's desirable for your partner to be violent, controlling, obsessive, and possessive — that it's even sexy.

It's not. And the fact that this is real has my faith in humanity fast dwindling.