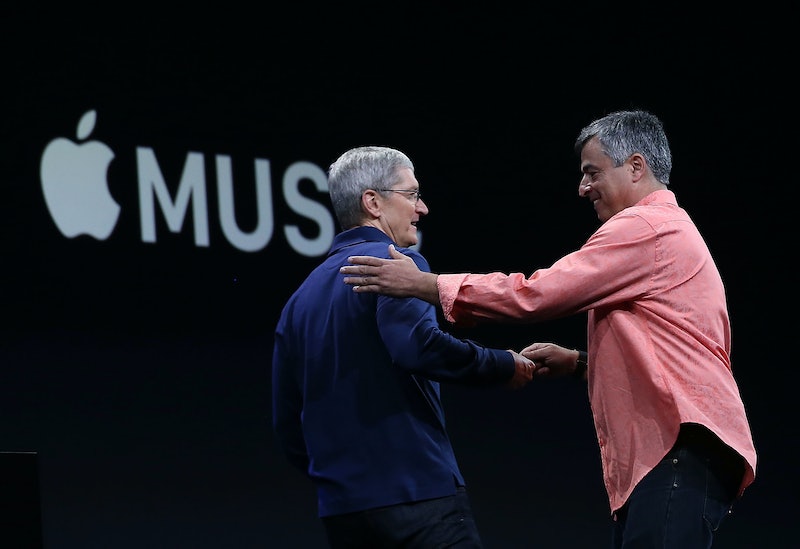 Remember when Apple changed the way people listened to music? Well, Apple wants to do that again. Years after the gigantic selection of on-demand streaming services like Spotify and Internet radio stations like Pandora made your 10,000-song iTunes library look like slim pickings, the tech giant on Monday previewed Apple Music, an app that aims to reign in the best of all three music generations and strengthen Apple's grip on the on-demand music market. Available on June 30 in over 100 countries, Apple Music will combine your own library with a streaming service, 24/7 Internet radio, and social network. But how does Apple Music work, exactly?

Depending on how much of a music junkie you are, the news of a major iTunes overhaul can be pretty unsettling. According to The New Yorker, the unveiling of Apple Music at the Worldwide Developer's Conference on Monday by Jimmy Iovine and Eddy Cue was "the biggest moment in the company’s musical history since the iTunes Store opened in 2003." For some hardcore Apple fans who still hang on to their classic iPods and have obsessively cataloged their iTunes library of paid, gifted, and pirated (throwback to Napster!) music since their high school days, a potentially dramatic change to the iTunes offering could be the best or the worst thing to happen to your music library since Genius.

Iovine summed up Apple Music in one sentence: "It's all the ways you love music all in one place."

Wait... all the ways I love music... all in one place? For the less devout among us who rely on customized Pandora stations at parties, Spotify cardio playlists at the gym, or Vevo for when you want to dance alone to Taylor Swift's "Bad Blood" on repeat on a weeknight (hey, don't judge!), Apple Music could be a revolution we either embrace or opt out of. Apple Music could be an easy, organized way to pull up that one Kendrick Lamar song we love, listen to that Beats 1 station that has Kendrick's latest hits, or a personalized playlist that Apple has created for us based on Kendrick Lamar, all from the same app. It could also be your battery life's worst nightmare.

But hopping on the Apple Music bandwagon is not mandatory, so if having all your musical offerings hanging out all in one place is way too much of a good thing, you have nothing to worry about.

But as it stands, as music consumers, we have plenty of questions about Apple Music. How much does the service cost? Unlike Spotify, will it let me listen to the latest Taylor Swift and The Beatles?

Here are the answers to your most pressing questions about Apple Music.

What Exactly Is Apple Music?

Apple Music's curation smarts will aim to show through in a "For You" section — a mix of albums, new releases and playlists that evolve as you use the app and it grows to understand your music preferences.

Which Artists Can I Listen To On Apple Music That I Can't Anywhere Else?

You can listen to Taylor Swift on Apple Music, according to Inquisitr. Many Swift fans were heartbroken back in November when Swift pulled all her music from Spotify. Though Swift's work is already on Tidal, she gave the OK for her discography to be featured on Apple Music's catalog.

Who can't you listen to on Apple Music? The legendary tunes of John, Paul, George and Ringo. According to 9 to 5 Mac, Apple has yet to bring the Fab Four on board to its newest streaming service.

What Is Beats 1 & How Is It Different From iTunes Radio?

According to Ad Age, Beats 1 will be a "24/7 radio station available around the world." The Beats 1 feature is the most obvious off-shoot of Apple's $3 billion acquisition of the music and headphone company Beats back in 2014. But unlike iTunes Radio or Pandora, Beats 1 will include real-life, human DJs and artist interviews as well as music.

What Is Connect? And How Is Drake Involved?

Drake jumped on stage at the Worldwide Developer's Conference on Monday to talk about how Apple Music's Connect feature could be a direct link between artists and fans, allowing the former to update with latest videos, songs, and practically anything else. Drake announced that he will be releasing his next album on Connect, according to The Verge.

"Focus on your body of work," Drake says, according to The Verge. "Instead of having to post your stuff on these different and sometimes confusing places, it's all in one place: Connect."

Apple Music is $9.99 a month, according to the FAQ on Beats Music's site. Beats Music subscribers will be able to move their subscriptions to Apple Music, as well as their libraries and playlists. According to The Verge, Apple Music also has a family plan option that will allow you to include other six other users for $14.99. Apple states in its press release that following its June 30 launch, Apple Music subscribers will be able to use the service for a three-month trial period for free.

Since Apple has given us plenty of notice in advance of its June 30 launch, music fans will have plenty of time to decide whether to convert to Apple Music or keep their old school iTunes music library intact.

More like this
Mollie King & Stuart Broad Have The Most Relatable Wedding Plans
By Sophie McEvoy
Tristan Thompson Plays Drake’s Best Man In A Music Video Wedding With 23 Brides
By Grace Wehniainen
The Families Of Grenfell Tower Are Still Waiting For Justice, Five Years On
By Bustle UK
Using Your Pet’s Name As A Password? Here’s Why You Might Want To Change It
By Cristina Sanza
Get Even More From Bustle — Sign Up For The Newsletter