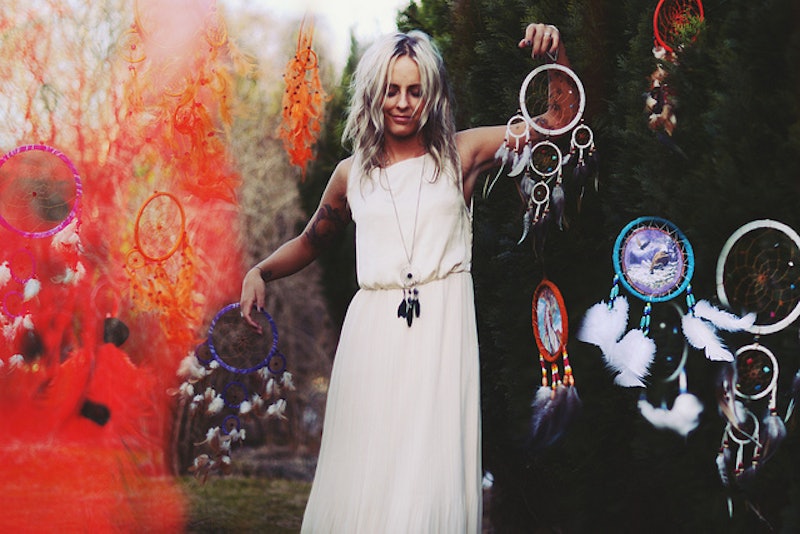 Have you ever dated someone who opted for the utmost, top of the line, best of everything — food, wine, music, whatever? Not that you really cared. After all, they were more than happy to share in those things with you. Were they dependable and always there when they said they would be? Were they tough on the outside, but a big softie romantic and all about sensitivity once you dug a little deeper? When it came time for arguments, did they last a little bit longer than usual? Because, come on, once they set their mind on an idea, there was no way in hell that they would change it? They were just too damn stubborn. Well, chances are, they were probably born between April 20-May 20 under the sign of the bull. Yes, you've dated, or are dating a taurus.

I talked to professional astrologers, best-selling authors, and the women behind Astrostyle.com, Ophira and Tali Edut — also known as, The AstroTwins — to give me a better insight into why Tauruses make great partners.

According to the AstroTwins, signs most compatible with Taureans are fellow earth signs like Capricorns and Virgos. They also have a good chance at love with the artsy and glam, Pisces. But things can go wrong if Pisces go flaky. Taurus is least compatible with the light and airy Libra and Aquarius. There’s too much attention to spread around and not enough of that will be focused on the Taurus. With Geminis, it tends to be a love-hate type of situation between the two.

As a fellow Taurean myself, I can say with complete bias that we’re a completely lovable bunch. Here are 13 reasons why:

Tauruses aren’t the wishy-washy types. There’s a reason why they’re so well known for their stability.

They’re very set in their ways. But that doesn’t necessarily mean they’re boring. They’re totally down to try new things … they just need a little coercing, and from the right person.

“Introduce the idea gradually, or let them have some kind of say in the agenda. Bribe them with food and drink,” the AstroTwins said. “Make sure it’s comfortable – for example, if you want them to attend an out-of-the-way festival, you can also book a night at a five-star hotel or a charming B&B.”

Tauruses are all about creature comforts. They’re very homey people who value a happy home life with a stable relationship and partner. Tauruses love their families and will do everything they can to protect them.

They’re hopeless romantics who tend to search for their great “love of a lifetime.” Tauruses just want partners who are stable, loyal, affectionate, and classy. But that doesn’t necessarily mean they’re relationship whores. In fact, they don’t just throw themselves into relationships. They like to take their time and feel the other person out. But once they’re in, they’re completely in, one hundred percent.

If there’s anything you need to know about a Taurus, just know that they’re not only stubborn, but stable and dependable, as well. When a Taurus says they’ll be there, they’ll be there.

They’re not a “player” sign. In fact, if they do play, they play for keeps. They’re loyal and devoted – as long as you are. According to the AstroTwins, Taurus men in particular are all about the “conventional lifestyle,” complete with marriage, kids, and the whole she-bang.

While Taurus women love being chased and the attention and adoration that comes with it, Taurus men, on the other hand, are a bit different. As the AstroTwins wrote in their book, Love Zodiac, if a Taurus man wants to pursue you, he will. And against all odds, at that. They even cited an example of fellow Taurean, David Beckham:

"In 1996, superhottie Beckham saw the Spice Girls' video "Say You'll Be There" while traveling abroad. He pointed to Posh and informed his soccer teammates that she was the woman he wanted, and that if she wanted him, they would be together forever. Within months, they were an item ... Such entitlement is typical Bull-boy behavior. The Taurus man fancies himself a prince. Naturally, he chooses his bride and can't imagine being denied. He usually gets his way ... He stubbornly persists, charging after his target until he reaches it."

They’re ruled under Venus, the goddess of love, so that obviously has to count for something, right?

“Can you say ‘strong like Bull?’ This rock-steady sign can keep going…and going. Taurus is ruled by Venus, the planet of sensuality, so they really know how to enjoy every touch, taste and carnal pleasure,” the AstroTwins explained.

When getting down with a Taurus, here's a little suggestion, “Bring the massage oil!”

8. Tauruses will spoil you to no end.

According to the AstroTwins, Tauruses are “providers,” meaning they’re the people who aren’t afraid to “bring home the bacon.” They like spoiling their partners with gifts or home cooked meals. Taurus men, in particular, will feel like “castrated schmucks” if they let a lady pay for the bill. Sure, it kind of brings feminism back like two hundred years, but what are you going to do? Tauruses are just built that way.

9. They value their personal relationships.

Relationships aren’t simply fun and games for Taurus people. They value harmony in their personal lives and work their best to keep their partners happy. They’re true romantics at heart, sentimental, and sure, maybe a tad bit overprotective and possessive, but that’s just shows how much they care.

10. They are damn classy individuals who appreciate the finer things in life.

According to the AstroTwins, you won’t be likely to find a Taurus person slumming it. In fact, they’re all about the good things in life.

“They have great taste in food, music, culture and ambience and will pick somewhere classy and interesting if they’re choosing the location. They also tend to dress well and will make a great first impression, aesthetically anyway.”

The AstroTwins suggest taking them on tasteful dates with a great atmosphere and even greater food. “This sign usually loves wine (though they can O.D. on it once they start pouring). Tauruses also love music, so a concert or a venue with live performances scores points. A gallery opening or a cool film would also be fun for the artsier members of this sign.”

11. But that doesn’t mean that they don’t enjoy the simple things, like just spending time together.

Because Taurus is an earth sign, it means they’re very grounded. They enjoy life’s simple pleasures and just spending quality time with their partners is more than enough for them.

12. Tauruses know who they are and DGAF.

Tauruses are genuine people. There’s none of that fake BS here. If you want someone who’s confident in their beliefs, their opinions, and who they are as an individual, then you’ll be sure to find that in a Taurus. If you’re looking for someone who can easily change or who tends to agree with you about anything and everything then look elsewhere, because Tauruses change for no one. For the most part, anyway. Besides, who says little debates here and there can’t be fun?

“The intense, bullish energy comes through differently when expressed by a man or a woman. Both are pretty mater-of-fact, loyal and know what they want. While the men can be a little more forceful in their pursuit, the women will let you know their limits as soon as you get close to crossing them. There’s a ‘no bull’ side to every Bull.”

13. Last, but definitely not least, Tauruses are a pretty sexy bunch.

Sure, you can find your pick of good looking people under any zodiac sign, but Taurus, in particular seem to have it all. I mean, you got Beckham, of course. Then you have Clooney, Dwayne Johnson, Channing Tatum, Enrique Iglesias, Henry Cavill, and Mr. Christian Grey himself, Jamie Dornan. Switching over to the ladies, you have Megan Fox, Amber Heard, Jessica Alba, Nikki Reed, Ellie Kemper, Christina Hendricks, and Tina Fey, among many others. What did I tell you? It's a pretty sexy group of individuals.

If you’re looking to bag yourself a Taurus, expect to be 100 percent loyal. Being funny couldn’t hurt, either. A person who would attract a Taurus is, “loyal, funny, someone they could see as the future parent of their children. Someone with common sense who knows how to keep it real, but also won’t embarrass them in public."

Those who repel Tauruses are flighty, two-faced, and superficial. Also, if you tend to dress poorly or think the concept of showering is lame, then you might want to stay away because Taurus people are “especially attuned to the five senses.”