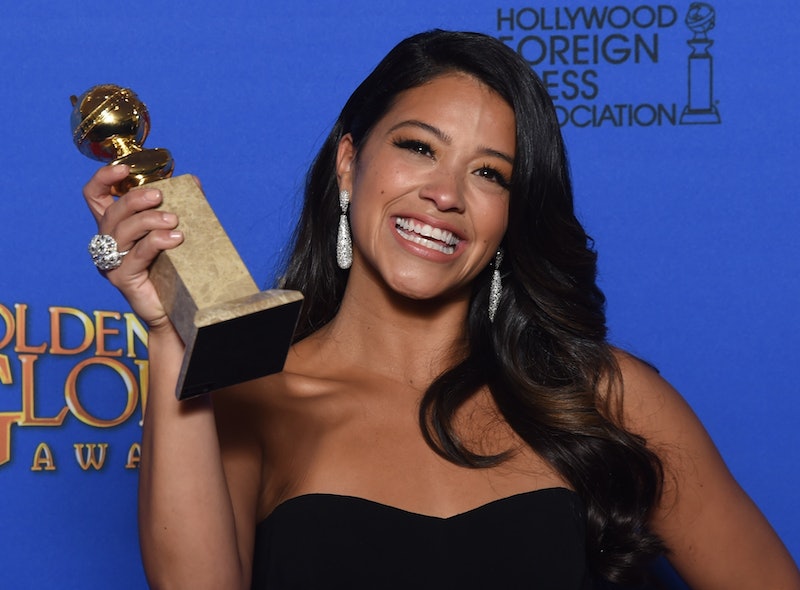 Let's just take a moment to talk about one of television's most inspiring gems: the woman who coined #iCanandiWill. Jane the Virgin's Gina Rodriguez is the cover star for Glam Belleza Latina with a coverline reading "When you see you fit in everywhere, anything is possible." With that amazing piece of advice and fierce look on the cover, she's pretty much won us over. Again.

In the magazine's summer issue, Rodriguez says, "I want to change the idea of minorities in the media." She continues on, saying "Growing up, I never saw my home life reflected on-screen, and that made me feel a certain way about myself." Major props to this chick, who made all of our eyes water with her acceptance speech at the Golden Globes for winning Best Actress.

This was a huge accomplishment for not only Rodriguez, but the Latina community as a whole, as she was only the fourth Latina to snag a Golden Globe for acting in the award show's history. She brings this lack of representation to light in the magazine, stating "Not seeing a woman like me as a lead made me feel like I'd never be skinny enough, I'd never be pretty enough. I want to give young girls, like my niece, the tools to see a billboard and think, 'That [non-Latina] girl is beautiful, but that’s not the only form of beauty.'"

The actress posted an image of her cover on Instagram, where she absolutely slays in a close up shot of her natural make up. Her caption reads, "Women, I don't care what anyone says, beauty is relative. Live and breathe in your own unique beauty. I was once told I wasn't pretty enough to be on the cover of a magazine. Ha! Good thing I didn't listen...@glamlatinamag Thank you for seeing my beauty."

Gina, keep doing your thing girl, and keep inspiring us to inspire others.