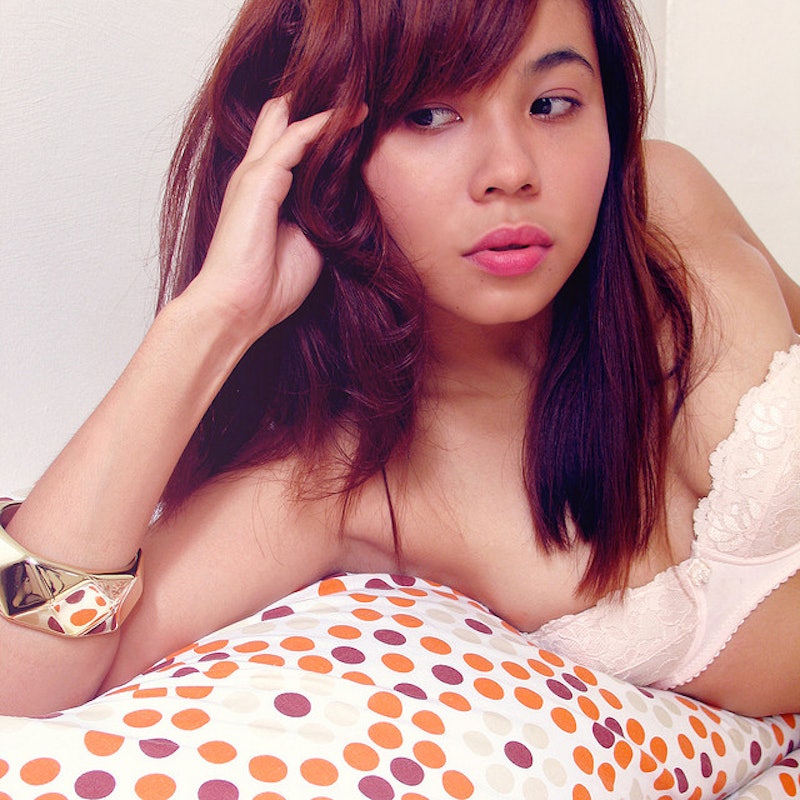 What I hate most about the morning sex that my husband is very much into is that it's hard to feel sexy during sex when you’re rocking a mouthful of plaque hot off the presses and a head full of flexi rods that make you look more like Medusa than a supermodel. I catch myself slipping into moments of self-consciousness with a man who has witnessed a human emerge from my abdomen, so I’m no stranger to the insecurity that can come with baring it all with a partner for the first time.

During those first few sexual encounters with someone, you want to be on your best behavior. But when it comes down to it, we have to be completely honest about the fact that most of our sexual encounters won’t be all wet hair and white noise from a thunderstorm, like in The Notebook. In fact, the best sexual encounters will probably involve a fake eyelash landing on their chest, avoiding saying "Oreo Cheesecake" when they demand, “Tell me what you want,“ and your damn cat meowing to death outside the door.

I consulted a few of my good guy pals, a handful of exes, and, of course, my husband to ask what's not actually important when they're getting laid. You may be relieved to know that the consensus was that they care way less about you looking like a porn star than they do about you feeling like one. Of course, if these things make you feel sexy and comfortable in bed, and you're not just doing them for your partner, then keep doing your thing. Otherwise, take the money you’re wasting on pricey panties and get the cheesecake and wine instead.

I was never a La Perla kind of girl (OK, more like my wallet wasn’t) but I’d spend hours in the lingerie section trying to get a matching set of something black and lacy. It’s actually a lot harder than you think. I was determined to look like I stepped out of a Trey Songz video so I could make a man trip over his tongue as he admired my sexy boy cut shorts. That is, until my husband dropped the bomb on me that anything black and lacy looks exactly the same to a man. They can’t tell boy cut from bikini, and none of that even matters as much as them landing on the floor. So I can save my looks of disdain for my girlfriends who rock a pink sport bra and brown undies like nobody’s business.

If you regularly shave and you're two days overdue, your partner probably won't notice. And if they do? They probably won't care. Your sexiness isn't determined by your leg hair. Being sexy is feeling sexy, and whoever you're sleeping with wants you to feel good.

He’s too busy doing a victory lap in his head that he got you off in the first place. Whether you look like you’re auditioning for a part in Possessed or just stubbed your toe on a table leg, there’s no Jumbotron in your bedroom. Let the good times roll along with your eyes to the back of your head.

It’s easy to think that, after childbirth or even after several sexual partners, your vagina will echo if your partner gets too close. But anyone who has passed ninth grade anatomy knows that’s simply not true. It’s more proof that a woman’s body is as amazing as we always suspected. As much as men (and women) will complain about how loose many parts of our anatomies are, not just our vaginas, the truth is that most days, no one can tell if you've had a baby besides your gynecologist.

I had stretch marks long before I ever had a baby. What can I say, my skin isn’t the most elastic thing in this world (#ElasticityFail). But if John Legend isn’t complaining about supermodel Chrissy Teignen’s stretch marks posted above (did I mention she’s a supermodel?) then how dare any jerk. Most men will remember the anniversary of the first time you did laundry together before the topography of your thighs.

I’m probably aging myself, but if anyone remembers the movie Boomerang, you’ll know that Eddie Murphy had women obsessing over keeping their feet pretty for a whole decade, just from a five-minute scene. Trust that the voice behind “Donkey” is an exception to the rule. No one is stressing over some chipped China Glaze when the clothes come off.

It can be hard to feel sexy if your hair is in curlers or wrapped in a scarf or some other nighttime gear. But for some odd reason, libido loves to kick in before your beachy waves have had a chance to set. When the mood is right, no one wants to hear, “Hold that thought. Let me finger comb my hair real quick" — and no woman wants to do that, either. Rather than risk the romance, just go with the flow, even if it means your beach waves are more of a wipeout.