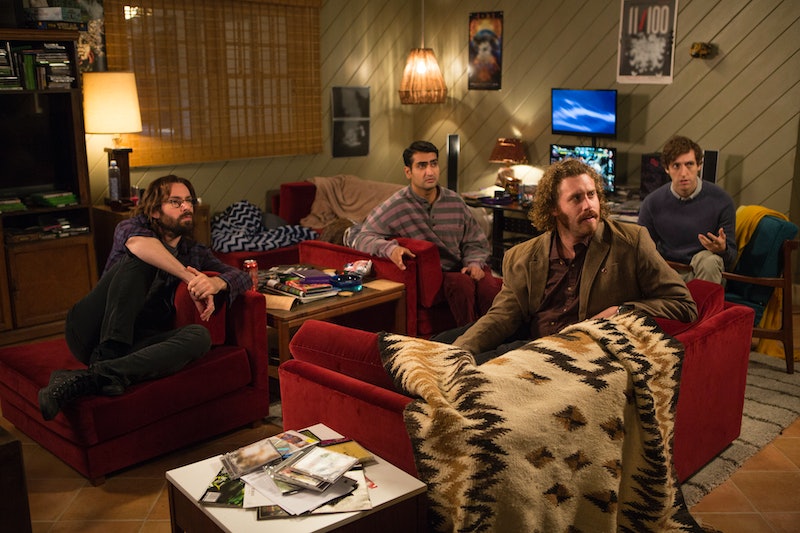 It's understandable if fans of HBO's irreverent tech comedy Silicon Valley are nervous about the show's chances of returning for a third season — the pay channel has been merciless with its comedies lately, canceling both Hello Ladies and Looking, plus announcing that the upcoming season of Getting On would be its last. But there's no reason to be concerned for Silicon Valley's fate. Not only did it just win Best Comedy Series at the Critics' Choice TV Awards against some very fierce competition (including HBO's own Veep, Amazon's Transparent, and The CW's Jane The Virgin), but HBO has actually already renewed the show for a third season! So when does Silicon Valley Season 3 premiere?

Both seasons of the HBO comedy so far have premiered in April, so it's a good bet that we'll see it land there again in 2016. Season 1's April 6 premiere date and Season 2's April 12 debut indicate that Season 3 should drop sometime in the first half of the month — barring any unforeseen Nucleus-level catastrophe.

It's interesting to note that, while it took HBO 15 days after Silicon Valley's freshman opener to renew it for Season 2, the comedy was renewed for Season 3 only one day after its Season 2 premiere. This certainly speaks to a growing level of confidence the channel has for its award-winning property. And could their accelerated pace of renewal lead to an even earlier premiere next year? Anything's possible...

Also, remember that Silicon Valley has always premiered on the same Sunday as HBO's other two spring shows, Game Of Thrones and Veep, so keep an eye out for news on them as well. Where one of them lands, the rest will follow.

Season 2 managed to garner some goodwill among viewers who were upset by Season 1's extremely dude-centric programming (pun intended). In today's television climate, a show with a cast of five men seemed at best ignorant, at worst regressive. Silicon Valley's sophomore outing at least partly atoned for that, both bringing in new female characters and paying more attention to the ones — or one, to be more accurate — who was already there.

This seismic shift is hilariously reflected in these two diametrically opposed headlines: "HBO's Silicon Valley Is A Nerdy Entourage," declared Mashable when the first season premiered; " Silicon Valley Is The Anti- Entourage ," Vulture proclaimed earlier this month. Hopefully, Season 3 will continue this trend towards less insulated, more diverse storytelling. Like Richard's ingenious "middle-out" technique, that could only be a win-win for everyone involved.