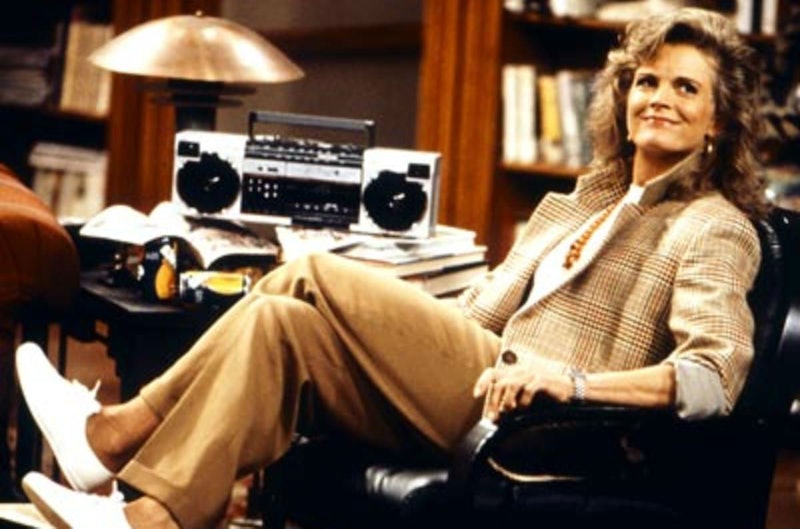 When Murphy Brown began airing on CBS in 1988, I was barely one year old, yet somehow, when news broke that the series would be returning to television in syndication on Encore Classic, I scrambled to make sure I still get that channel. But I'm not exactly at the center of the proper nostalgia demographic. My mother is — she was a 30-something career woman throughout the series' run. Still, for as much of my young life as I can remember (things drop off around age three and below, of course), I looked forward to sitting down for the 8 PM airtime with my mother every week. I was a strange child in many ways (often dubbed "Four-going-on-Forty" by parents and relatives), and I think, to some extent, Murphy Brown is to blame.

I didn't grow up to be gruff or an alcoholic (though I did innately know I preferred whiskey to white wine when I came of age) like Murphy (Candice Bergen), but I do think that much of my development is owed to her. Despite many women in my family being stay-at-home mothers at some point in their lives (my own mother excepted), the option never appealed to me. I never judged those who chose that life, but somewhere, deep down inside, a career was always number one. When it came time to brainstorm potential paths freshman year in high school, I chose journalism in a heartbeat, despite the fact that my news background included little more than creating the crossword puzzles for my middle school's once yearly student magazine. And while I'm a human woman who loves the idea of falling in love with someone, it never managed to feel like something I needed in order to live in a great house where I could sing Motown songs and open my mail. For all these things, I thank my mother (she would kill me if I only thanked television) and the incredible reinforcement provided by the tough, snarky career woman Murphy Brown.

The problem is that while I can see all the ways in which growing up with Murphy Brown has influenced me, my memory of begging to watch the show as a four to 10-year-old child yields few details and more of a general impression. Murphy was funny and sarcastic, sharp-tongued and quick-witted. She wasn't a fumbling woman in a man's world, it was her world and everyone would do best to get out of her way. Perhaps I saw a bit of a resemblance to my mother, who ingrained a nascent sense of feminism in me from a young age (so much so, that I knew the name Gloria Steinem before I was old enough to know why she was so important). Perhaps I just liked watching Murph sing along to all the Motown songs I knew from the radio, but the effect was clear: I liked this woman, and in many ways, I wanted her life (minus the stint at the Betty Ford Center, of course).

Getting to finally see the series air on television again offers an enticing opportunity in that I'll now get to watch the series understanding the prejudice that was behind Dan Quayle's assertion that her single-motherhood was abhorrent. Now, I'll catch all the TV-appropriate sexual jokes and innuendos. But mostly importantly, I now understand just how revolutionary it was to have a woman like Murphy headlining a popular sitcom in the '90s and the ways in which she changed television.

This classic TV character helped give me the right foundation, and now I'll finally have the chance to understand why. Sure, I'll have to move past the dated sitcom presentation, but I still watch Cheers and Sports Night on Netflix and they're just fine. What's important is that a slice of TV history, and my personal history as well, will finally make sense.

And while my fellow viewers will probably consist of a handful of 50-something women (the thirty-somethings who loved it in the '90s), I urge anyone who loved Liz Lemon or even re-runs of Mary Tyler Moore on Nick at Night (we grew up with that, too, twenty-somethings) to give the 25-year-old show a shot. There's a reason Murphy and her early '90s blowout captured a nation, even if she was catching her flies with a side of vinegar.

More like this
Kit Connor Speaks Out On “Shocking” Lack Of Bisexual Representation
By Sam Ramsden
These 'Criminal Minds' Throwback Photos Show The Cast’s 17-Year Evolution
By Grace Wehniainen
The First Trailer For 'That '90s Show' Includes So Many Nods To The Original Series
By Jack Irvin, Alyssa Lapid and Grace Wehniainen
The 'Ugly Betty' Cast Just Reunited In The Best Way
By Sam Ramsden
Get Even More From Bustle — Sign Up For The Newsletter