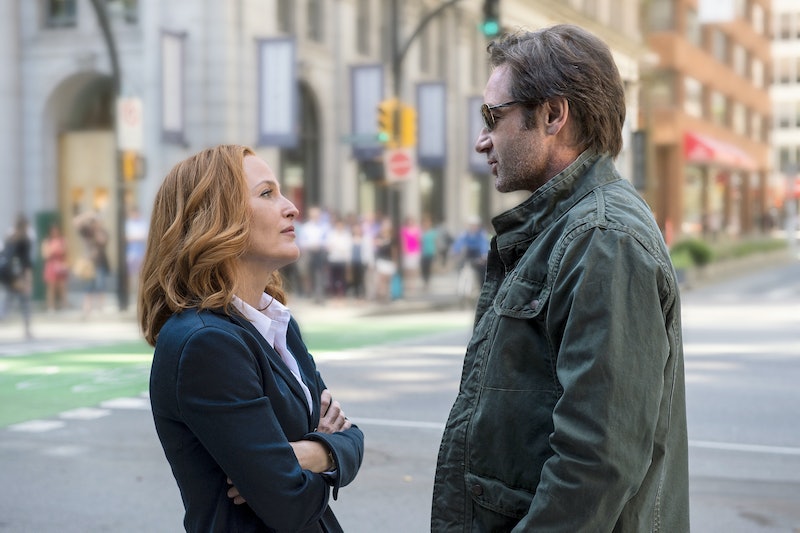 It is really happening, guys. The X-Files is coming back and there is now picture proof that this is not all just one big fever dream. Don't just want to believe — do believe! Gillian Anderson, the official X-Files Twitter account, and intrepid fans have been unveiling set photos this week that will make X-Files fans everywhere scream like Sally Draper when she heard her dad bought her tickets to a Beatles concert. While I am sure this is just the beginning of the teasers to come as production starts really rolling, the photos below will undoubtedly hit you right in the nostalgia bone — and a couple of them will get your brain working overtime trying to guess what these new episodes will entail. I mean, let's be real: without theorizing, it's not really The X-Files.

Having Mulder and Scully back on the case is more than enough good news for me, but I must admit I am desperate to see where the six-episode revival takes the characters. It has been seven years since the last time Mulder and Scully were onscreen in the 2008 movie X-Files: I Want to Believe, so anything could have happened by now — even the end of the world, if the 2002 series finale can be believed!

(For what it's worth, though, it probably can't: the first rule of The X-Files is trust no one — and that goes double for creator Chris Carter.)

All I know for sure is that looking at these photos will give all X-Files fans these thoughts:

It is simply impossible to look at those pictures and not feel a sense of contentment you have not felt since 2008. Mulder and Scully are together again, and right now everything is right with the world.

2. "Mulder and Scully are already kissing!?! Is this real life?"

Remember when it took Carter seven years to make Scully and Mulder hook up, and when they did, it was the most nonchalant thing ever? The man is finally giving fans what they want— Mulder and Scully smoochies. Excuse me while my 'shipper heart explodes.

3. "Is Anderson an ageless wizard?"

Mulder is dressed way down compared to Scully and Joel McHale. Is he working off the grid, or is he just way over the whole suit thing? He was in hiding for quite awhile — it's possible his sartorial tastes changed permanently.

David Duchovny is so tall, Anderson has always had to stand on an apple box (lovingly called a Gilly ramp) to ensure Mulder and Scully are in the same frame of any scene they shoot. (See adorable box above.). Now McHale has joined the cast, though, and he towers over Duchovny! Anderson is going to need a higher box.

6. "Why are Mulder and Scully in the backseat?"

Mulder and Scully are front seat people — they are not made for sitting in the backseat of cars. They did it once on the way to that weird partners retreat, yes, but overall they are always the drivers. Did the FBI call them back into action and send them a car? It does look like a pretty plush backseat. I am super curious about this.

Scully is dressed like a boss — seriously, she looks like she is ready for action in these pics. This could mean she has continued practicing medicine or it could mean she has already rejoined the FBI. THE POSSIBILITIES ARE ENDLESS.

Answer: yes, yes it is. This is basically the greatest thing that has ever happened, so cry with pride X-Files fans.

9. "Should I be thinking more about the plot and less about how beautiful Mulder and Scully are together?"

Nah. Mulder and Scully are always going to beat alien shenanigans hands down. Sure, I'm curious about the plot, but I am more curious about tracking every kiss, hand touch, and moment of flawless verbal sparring between my two favorite characters in the universe, just like I did back in olden days of the '90s.