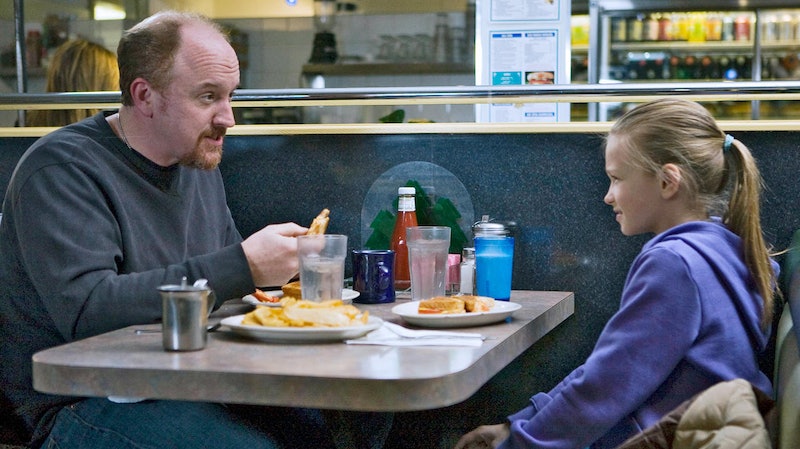 Dads come in all shapes and sizes — big and tall, thin and wiry, jolly, strict, and embarrassing. While their interests vary (for example, my dad hates all things that are commonly featured on Father's Day cards, which makes the selection challenging every year), one thing remains true — they're your best source of support in this crazy world. Next to your mom, that is.

At the age of 18, my dad morphed from "Dad You Don't Want To Get In Trouble Around" to "Friend Dad." The transformation was a little tough for me to handle, since it seemingly came all at once. "Darn it" became "Damn it," and all of a sudden he became really invested in learning about the guys I liked and the music I was into. He believed that by 18, I was fully an adult. It was like his parenting was over the second I blew out the candles on my birthday cake.

However, he quickly realized that a second wave of parenting was about to come. He let me vent about college, and the struggles of finding a job, and later conversations turned to the advantages of buying property versus renting — and he opened up to me, as well, about his own friendships and struggles. After a brief stint back home post-graduation, I realized that my mannerisms were quite similar to my dad's. We shared similar viewpoints, had the same sense of humor, and oh my God my dad was turning into my best friend.

That's us in Italy, 10 years ago. Enjoying gelato together, like two besties.

My dad might laugh and deny our friendship, but I think he knows it's there. No matter how frustrated we might get at each other from time to time, we both know that arguments would never turn into grudges. The longest we can stay mad? Maybe a day or so. Just like a best friend, I know that regardless of the situation, he's rooting for me to be the best version of myself.

If you're wondering if you have the same relationship with your dad, here are some signs as to whether or not you should be picking up those BFF necklaces from Claire's anytime soon.

1. When something good happens, your dad knows within the hour

If you get a job promotion, your dad is one of the first to know. And not only because he's likely to spread it to the family quicker than Facebook, but because his praise means more to you than absolutely anything. Even if your dad doesn't understand your job field (since it's on the Chandler Bing/Barney Stinson level of vague), he does understand how hard you've worked.

2. It's a non-spoken agreement that you can come home whenever you want

Whether it's for a weekend visit, or an extended stay based on a massive fight you had with your roommate, the door is always open. While he's not begging you to come home (since the electricity bill doubles based on your hairdryer usage alone), he'll admit that he misses your company and your willingness to fix the Internet connection for him when the modem needs to be rebooted.

3. Your everlasting support of a sports team is all thanks to your dad

When you were a kid, you liked the Atlanta Braves since your dad did. Knowing nothing about baseball, his support was enough to turn you into a believer. Now you're in your 20s or 30s, and still find yourself rooting for the team. Daily chats about it encourage your fandom, and seeing games live with him is an absolute blast. Even off season isn't too much of a bummer, since recollecting on the memories of the past season will never get old.

4. If your boyfriend and your dad disagree about something, you tend to side with your dad

Hopefully the argument is about stupid, petty things — like which deli meat reigns supreme, or why kids today are so addicted to their cell phones. The banter is harmless, but as a third party, you feel a little torn. While you want to stand by your significant other, your opinions pretty much align with your dad's thoughts. What can you say? You share genetics with the guy.

5. You force him to follow up with you after every doctor's appointment

He's had a cough for about a week now, and he's finally going to see a doctor about the problem. Since you've already WebMD'd his symptoms, and you're sure it's deadly, you find yourself checking up on him constantly. When people say you're being a little overprotective, you shrug and silently wonder why they're not as in-tune with their dad's health. You need this guy around for as long as possible.

6. On a weekly basis, you recap what you've watched on Netflix with your dad

You forced him to watch Gilmore Girls, since he has a thing for Lauren Graham. After balking at the title, he lets you know that he liked it way more than he thought he would. In return, he'll tell you about a few classics that were just released, and then tell you the stories about when he saw them in theaters. In general, dad's suggestions are way better than Netflix's suggestions.

7. You've planned out a Father's Day gift since Mother's Day

You love giving gifts, and your Mother's Day present gave you the greatest idea for dad. You might even wonder if you should just gift him your first idea now, and then get him another proper gift when the holiday comes around.

8. Your dad knows about all of the gossip between your friends

Your dad thinks highly of your crew, and always asks how they're doing. When you mention breakups and proposals within the group, he gets excited. "But wasn't Lindsey dating that other guy? What happened with him?"

9. Your boyfriend knows that before he proposes, he WILL ask your father for permission

It might be an old fashioned tradition, but you know it'd mean the world to your dad. Plus, it's the perfect way for him to stay in the loop, and feel like he's part of the wedding planning. You don't know when your boyfriend will pop the question, when the marriage will take place, who your bridesmaids will be, or where the wedding will be held — but you DO know your future husband should start the process on the right foot.

10. ... and at the wedding, the father-daughter dance will be the most difficult song to choose

Granted, it's hard to find a song that isn't too, er, "lovey" with the lyrics, but it's also a battle to find a song that's a perfect soundtrack to the moment. You're looking forward to the father-daughter dance, since in your eyes, that's when the emotions will really start to flow.

11. On your 21st birthday, you went out for a celebratory beer with dad

He always told you that he'd buy you a beer to celebrate your big 2-1, and that's what you were looking forward to the most — I mean, you have forever to get blotto at the bar with your friends, but the "beer with dad" moment is just a little bit more celebratory of your milestone. This might also have been the first moment you actually learned about beer. Chances are, you got whatever he got, since your preference of beer was at a "whose commercials do I like best?" stage.

If you're looking to get a new car, you run a few models by him first. If you're looking for the best way to save for the future, you ask him what his financial planning was like before having kids. No matter what, you'll always believe the "Father Knows Best" mentality, and will always look to him for major life guidance.

More like this
18 Father's Day Poems That'll Make You & Your Dad Tear Up
By Michelle Regalado and Siena Gagliano
21 Funny Memes To Text Your Dad On Father's Day
By Chelsey Grasso, Syeda Khaula Saad and Siena Gagliano
23 Personalized Father's Day Gifts Your Dad Will Actually Like
By Brittany Bennett
Dan Levy’s Father’s Day Pic Of Dad Eugene Spoofs The ‘Schitt’s Creek’ Vet’s Past
By Grace Wehniainen
Get Even More From Bustle — Sign Up For The Newsletter