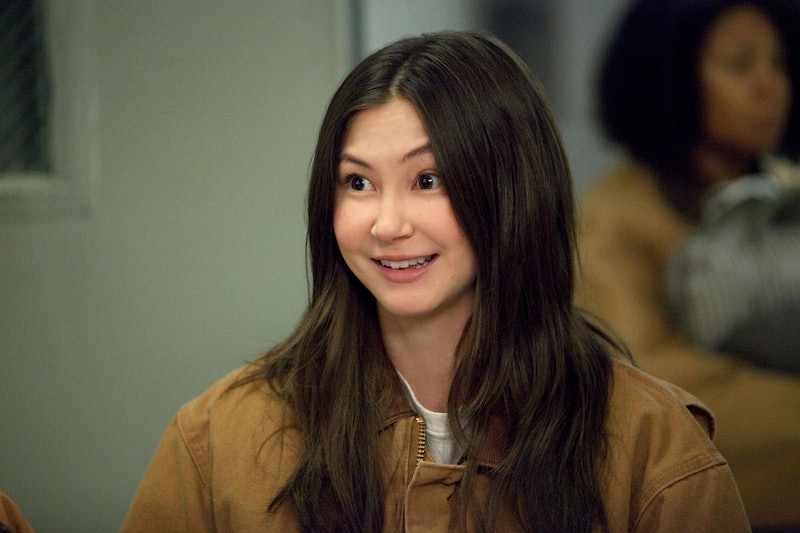 It's Orange Is the New Black season, and I can't wait to find out which characters win more of a spotlight in Season 3. Brook Soso wasn't the most popular new character, but she certainly made a memorable impression on both Litchfield and OITNB fans. She may have been called "annoying" because of her relentlessly chipper voice and her aggressive attempts to form camaraderie with her jaded fellow inmates, but I think there's more than her first impression on the audience — just look at why Brook Soso went to prison. She was arrested for protesting, and probably was sentenced to some time in federal prison for committing some form of politically motivated vandalism/trespassing, like we saw Sister Ingalls do in her activist flashbacks late in Season 2. She sat in a tree to protest deforestation and logging, but it's unsaid the circumstances of where she was and what exactly she was sentenced to.

Because Brook is the only one of her group of friends to be placed in prison, and seems to be totally alone, she quickly becomes a laughingstock among the Litchfield prisoners, especially because her small attempts at activism inside are met with cynicism and derision, and it's revealed that her "shower strike" is mostly motivated by fear, not by an effort to affect any change in the prison conditions.

But when she started a hunger strike in mid Season 2 to protest the treatment of the prisoners, the tide starts to turn towards Brook as Yoga Jones and Sister Ingalls joined her efforts, sticking up for the issues that bother them — solitary confinement and elder abuse — proving that Brook does have a certain passion and power for activism.

Of course, the main feature of the character is her almost relentless naiveté about what prison would be like, even though unlike the majority of the women there, she basically chose to go there. Sister Ingalls eventually went to prison because the Catholic Church refused to pay for her legal defense, and basically kicked her out for being too much of a troublemaker. It doesn't seem like Brook had that same organizational support around her (even though she loves talking about her friend Meadow), so she was desperate to find it in prison... and she kind of did.

Even though Brook Soso is clearly a supporting player in Orange Is the New Black's second season, she might end up becoming more important if the civil disobedience theme ends up going any further. Personally, I love going into a season knowing as little as possible, but since it's confirmed that Brook Soso is back, I'm hoping that the show continues its tradition of focusing on new characters each year and devotes more time to getting to know Brook Soso.