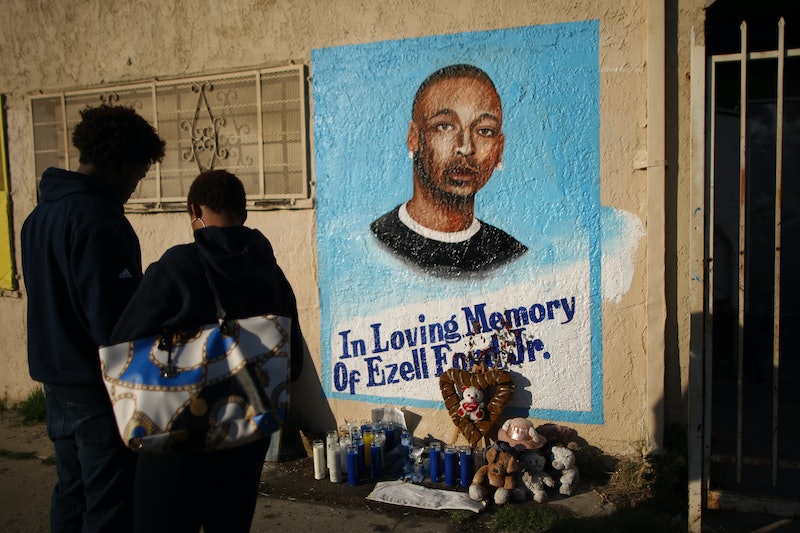 The Los Angeles Board of Police Commissioners unanimously ruled on Tuesday that LAPD Officer Sharlton Wampler had violated policy in the incident that led to the shooting death of Ezell Ford in 2014. But will Wampler be charged for Ford's death? The incident occurred mere days after Michael Brown was shot and killed by Darren Wilson in Ferguson. Wampler and another officer approached Ford, who family members describe as mentally ill. Ford was on the ground near a parked car when one of the officers allegedly tried to grab him. In turn, he allegedly grabbed the officer, physically bringing him down. Ford was subsequently shot three times, according to autopsy reports. The civilian committee's ruling that Wampler's actions went against protocol could certainly pave the way for subsequent legal action against the officer.

The unanimous agreement stands in stark contrast to LAPD Chief Charlie Beck's findings, however. Beck, along with an independent investigator, felt the exact opposite of the civilian committee, twice investigating the incident. L.A. Police Union President Craig Lally strongly disagreed with the findings, siding with Beck's initial reports:

We fully support Chief Beck’s findings that the officers involved in the Ezell Ford shooting were justified and their actions were in policy. We believe the commission’s decision was irresponsible and reckless and was solely made to avoid civil unrest.

Beck has said that he respects "the process and the decision made in this matter," suggesting an openness to exploring the legal implications of the incident. The police chief has consistently maintained a relatively neutral stance throughout the lengthy investigation into Ford's shooting. Prior to an autopsy being released, Beck was quoted as saying that he doesn't "support every one of my officer-involved shootings." He has yet to mention what subsequent action should be taken following the release of the L.A. Board of Police Commissioners' findings, however.

Many, including Ford's mother, Tritobia Ford, are counting on L.A. District Attorney Jackie Lacey to begin the legal process of formally charging Wampler. Though Wampler was found to be in violation of policy, his fellow officer Antonio Villegas was found to not be at fault. According to the report, the next step is indeed up to Lacey:

The determination as to the criminal culpability for the involved officers is the responsibility of the Los Angeles County District Attorney and not within the authority of the Chief of Police or Police Commission.

So far, Lacey has yet to formally file any charges against Wampler, and it's not clear whether she will or won't. She says the case is now under consideration.