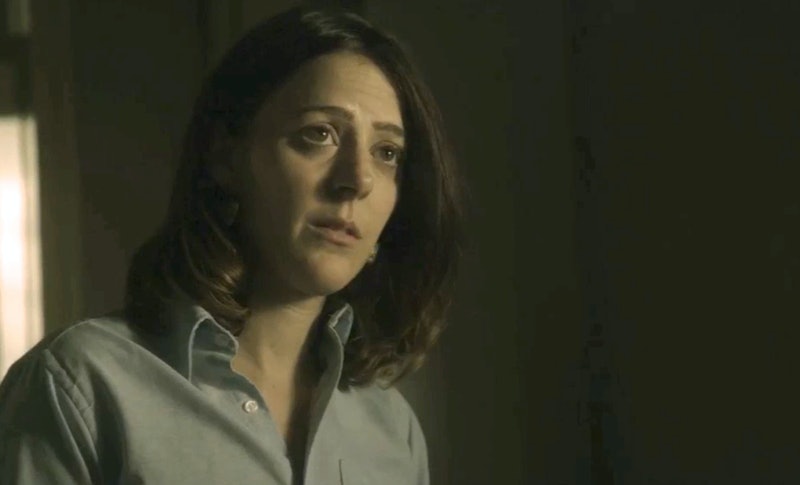 NBC's crime thriller Aquarius is the TV equivalent of a summer reading list: Entertaining, but with an undercurrent of educational value — at least where its story intersects with the truth. Aquarius is technically piece of historical fiction, and takes plenty of liberties even when the characters and events are based in fact. Charles Manson existed and courted a commune of female followers: True. A no-nonsense cop with David Duchovny's flippant monotone voice was hot on his tail: False. But, if you've reached Episode 7 in your marathon, you've met Mary Brunner, aka Mother Mary — yet another woman in Manson's entourage. This is one of the plotlines that has its roots in history. Mary Brunner is a real person, and she gave birth to Charles Manson's baby.

In Aquarius, a pregnant Brunner isn't so sure about returning to the Family with her new "sisters." In reality, the woman gave birth to their son Valentine surrounded by Manson's followers. Rumor has it that Manson cut the umbilical cord with his teeth. That's a dealbreaker, ladies.

Like she's portrayed in the show, Mother Mary was an early adopter of Manson's brand of crazy. They met when was 21 and entered into a relationship. She was by his side as he trolled around California, pulling new followers into his sway. So, the "Mother" nickname not only signifies Brunner's status as Manson's baby mama, but also her nurturing role in the larger "Family."

Though she was an important figure in the group, Brunner wasn't actually present at the site of Manson's most infamous act (the Tate-LaBianca murders in 1969). The cops had her in custody on charges of credit card fraud the day of the brutal murders of actress Sharon Tate and her house guests. She was, however, involved in the 1969 murder of Gary Hinman, a music teacher who failed to get Manson the recording contract and artistic fame he desired. Brunner escaped prosecution by offering up testimony against accomplices Susan Atkins and Bobbie Beausoleil. She later backtracked on that testimony, and went about proving her loyalty to the Family in a pretty extreme way.

In 1971, Brunner and a group of Manson acolytes cooked up a plan to demand the release of their incarcerated leader and friends. They intended to hijack a plane and execute one passenger an hour until the police complied with their demands. They never made it into the air though. This scheme ended in a shoot-out with law enforcement in the surplus store they robbed to gather their artillery. Brunner was captured, and served six years in the same California facility as several of her sisters.

So where is Mary Brunner now? She's still alive, though wherever she is, that's no longer her name. When Mother Mary was released from prison in the '70s, she finally disengaged from the Manson Family. She was re-awarded custody of her son (who, I have to add, went by the nickname "Pooh Bear") and moved to an unknown location in the Midwest.

I can't help wondering if the real Brunner has seen or even knows about her fictional portrayal on Aquarius. Either way, I'm sure she knows that she, and the women who share her past, are still a source of public fascination — even all these years later.