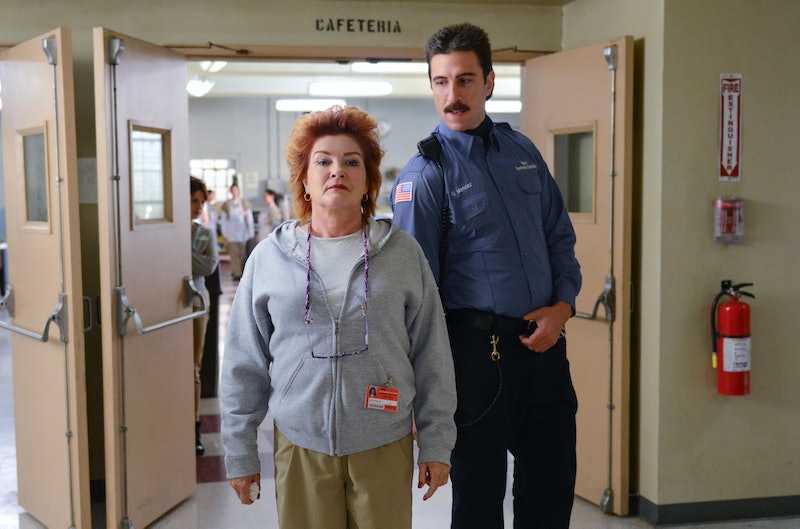 Out of all the women at the Litchfield Penitentiary who are featured in Orange is the New Black Season 3, I like to think that Galina “Red” Reznikov is my own personal spirit animal. She’s boisterous, she’s feisty, and she commands power wherever she goes — who wouldn’t want to be like that? Well, I wouldn’t want to be like if it meant that I was stuck in the clink, which leads me to the question: How did OITNB's Red get sent to prison anyway?

A Russian native and New York City transplant, Red ran a middling Russian restaurant with her husband prior to her incarceration. When some members of the Russian mob started hanging out in their restaurant, Red’s husband pressured her to start befriending the mob wives, going on walks with them and trying to gain their favor. Unfortunately, this didn't work out so well for Red, because the women were cruel to her. They didn't laugh at her jokes, they made her feel less than, and they purposely left her out of their activities. One day, Red got so fed up with the way these women make her feel that Red punched one in the chest, rupturing her breast implant. I didn’t know that that was a thing, but apparently this Russian’s implants were so fragile they couldn't even be touched.

Normally, injuring a mob wife would lead to some dire consequences for the perpetrator, but Red, being the chameleon she is, gave some of the mobsters some very sound business advice, getting her into the inner circle of the gangsters in her restaurant. This led to a very interesting power dynamic between Red and her husband: he always assumed that he would be the one that the mobsters went to for advice, but instead, his wife beat him to it. We as viewers, however, are still not 100 percent sure as to why Red is in jail, but we have to assume that it has something to do with her very strong ties to the Russian mafia.

In Litchfield, Red rules the roost as the cook and not-so-nurturing den mother of the group. Over the past two seasons, she’s been on top, but, thanks to Mendez and Vee, she’s also been on the bottom. Where could things lead for Red this season? Here are my top picks.

Red Gets A Love Interest

Red had a crappy husband on the outside, so maybe it’s time she gets some love, male or female, in prison. I’d love to see the newer, tougher Red reason out falling in love.

We’ve seen flashbacks of Red’s husband, but not of her sons. When Red asked Piper to check on her family’s business, Piper lied and said it was doing well when it really went out of business. Red’s sons showing up and telling their mother this would create an interesting dynamic between Piper and Red, as the latter doesn’t do well with lying.

Red is the glue that holds a lot of the day-to-day happenings at Litchfield together, so what would happen if she left? Who would rise to the top? And who would fall to the bottom?

Season 3 of Orange Is The New Black premiered June 11 on Netflix, so it’s only a matter of time before we see what’s in store for Red. I just hope she doesn’t lose that amazing mane.