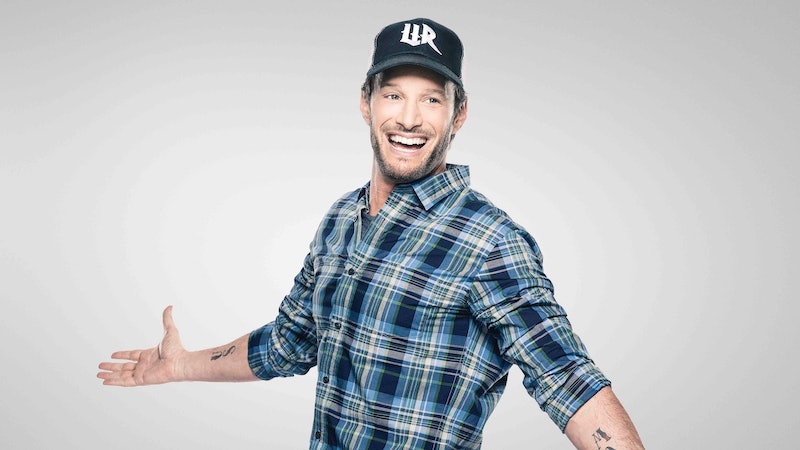 Just when you thought that late-night talk shows were such a super-saturated, ultra-competitive part of TV that it couldn't contain another show, a new one sprouts up where you'd least expect it. Namely, Country Music Television. CMT doesn't have that many original series, and most of them seem to be about country-music-related things, like Reel Eats, a program that shows a CMT movie, cooks up some kind of related meal in a cooking segment, and interviews country music stars. To me, that all works together. But CMT has decided to branch out into late-night comedy chat shows, premiering The Josh Wolf Show on June 11. I guess they figured that, if everyone else was doing it, they should be, too. But who's the man behind the desk? Who is Josh Wolf?

Let's get this out of the way first: He's yet another white dude comedian, so The Josh Wolf Show won't be the series to bring some much needed diversity to late-night TV. But Wolf's past work shows he has the potential to be a solid host, so here's what you should know about the 40-year-old comedian.

He Got His Start With Chelsea Lately

Wolf made frequent appearances on Chelsea Handler's talk show and probably picked up a few pointers on how to be a great late-night host.

He's Been Behind The Scenes

Wolf has been honing his comedy chops even when he's not on stage or in front of the camera. He's written scripts for sitcoms like Yes, Dear, All of Us, and Cuts — and, of course, has written for Chelsea Lately. He's also been on-screen on sitcoms like My Name Is Earl and Raising Hope. Those shows seem pretty on-brand for CMT too.

His Cousin Is Scott Wolf From Party Of Five

That has no bearing on his comedy or what his show will be like. It's just amazing.

Expect something totally new when you tune into The Josh Wolf Show. “That sort of late-night talk format, it’s being serviced in so many other places,” the host told The Wrap. “This show, the first two acts will be panel-driven, not so celebrity-driven. I want my stories to evoke the people who are watching them.”

OK, Wolf himself isn't a country-music star, so it seems like his show would be a weird fit for CMT — until it's clear that the show's future celebrity guests will be from the country music world. "You won't see any deviation from music being at the core of our DNA," CMT president Brian Philips told Fox at a press event.

“We want him in flannel shirts," Jayson Dinsmore, CMT’s executive vice president of development, told The Wrap about Wolf's look on his new show, adding, "and we have no interest in taking his hat.” So fans of Wolf's from before, those trucker hats will remain a wardrobe staple. If you're new to the comedian's style, well, get used to it.

More like this
Lewis Capaldi Has Been Hilariously Candid About His Time On Dating Apps
By El Hunt
Jennifer Lopez Shares Rare Holiday Photos Of Ben Affleck & Her Twins
By Radhika Menon
Selena Gomez & Blackpink's Post-Show Meetup Left Fans Thirsty For More
By Stephanie Topacio Long
The 'Love, Lizzo' Harry Styles Scene Is Just 1 Moment That Made Fans Feel Seen
By Brad Witter
Get Even More From Bustle — Sign Up For The Newsletter