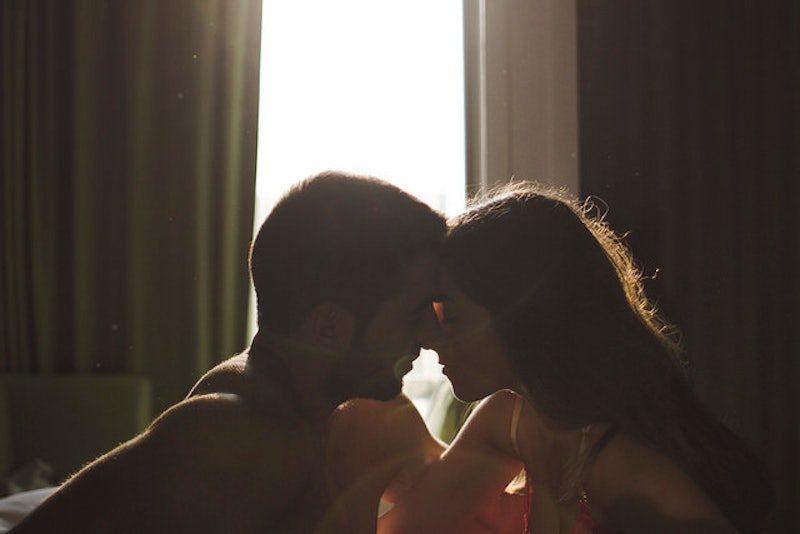 It's a fairly worn cliche that the frequency of sex in long-term relationships changes. Or that the sex becomes less hot, or less exciting, or shorter, or more mechanical. But that's not true for all couples. Some manage to preserve the hotness of the first few months, and carry that into their entire relationship. Just because you have spent hours together in bed doesn't mean that the good times have to stop rolling, it seems.

Rather than a Sisyphean task, it turns out that some couples who have been together — and have been sleeping together — for a long time have found ways to stay green between the sheets. Of course, no one thing is the magic trick: What works for one couple would probably turn off another couple completely. It is safe to say, though, that the thing all of these people have in common is a commitment to maintaining an amazing sex life, no matter how long they've been together. Whether you're in a long-term relationship and want to compare notes or you're just curious how people who have been together forever keep it tight in the bedroom, here are seven women weighing in on their sex secrets.

"From time to time, we pretend to be strangers just meeting at a bar. One of us will go earlier than the other, and we'll play out this whole scenario of these two characters who are trying to pick each other up. It's sounds silly, but it's really fun. We sometimes do the same when we're on plane rides. I'll get on before him, and we'll pretend to be strangers. Sometimes we'll tell the truth about our lives and other times we'll invent everything we say ... then we have great sex later, because of it." — Amanda, 35

2. They take turns asking for what they want in bed

"We take turns asking for exactly what we want at least a couple of times a week. When it's my turn, I know he'll do anything I ask him to do, so I think about what I want all day and can't wait to get home and sneak away with him. When it's his, I am also really excited, because I don't know what he'll ask for. It keeps us on our toes, and forces us to never be too selfish in the bedroom." Jackie*, 31

"My husband and I bought a board game one year called "Monogamy" — it's a board game that sets you sexy challenges and gets you to try out new things. We whip that out every now and then for an exciting evening!" — Sarah*, 24

4. They just can't keep their hands off each other

"I'm really attracted to my husband. We have been having incredible sex since the day we met, and I don't see things slowing down. We've been together for 11 years, and the sex has just improved as we've gotten more comfortable together and fallen more deeply in love. Plus, we know our way around each other's bodies! He knows exactly what I like — and vice versa." — Jillian*, 39

5. They play with bondage

"He ties me up. Whenever things start getting a little vanilla for us, we start talking in bed about how he's going to tie me up next. We use different things — handcuffs, scarves, whatever — different times. After we've discussed exactly how and when he's going to restrain me, he attacks when I least expect it. There's something irresistible about completely submitting to him and letting him do whatever he wants to me." — Hannah*, 25

6. They set aside sex time

"I wish I could say we've always been strong in the bedroom, but I will admit that things got a little lackluster for a couple of years after we had a child. I'm happy to say that this changed. I think it's because we starting putting aside time for sex a few times a week. No matter what else was going on, we would go to bed together well before bedtime. It took some time at first, but we quickly fell into a groove that is better than ever! Just like anything else, sex requires time. But it's so worth it!" — Rita*, 34

"We have sex in public places. In bar bathrooms, on hiking trails, even on a train one time! We try to do this kind of thing at least once or twice a month, and this makes the rest of our time together really fun. We talk about it and fantasize and plan our next adventure. We've been together seven years and there have been times we've been a little less gung-ho about it, but we are really into making sure things work out together." — Molly*, 27