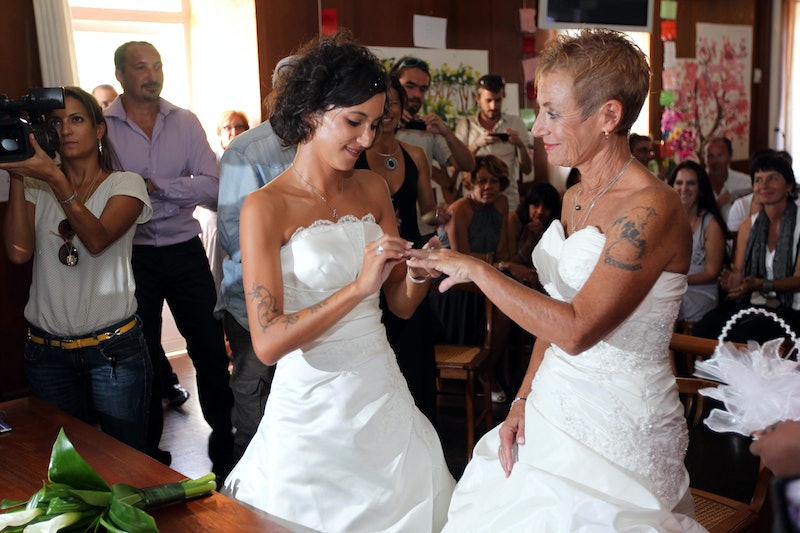 In February, the popular girl-on-girl magazine Autostraddle released their 2015 Ultimate Lesbian Sex Survey and found a whole wealth of data on the types of relationships often found among queer women. The survey asked all sorts of questions, from how frequently participants were having sex and how kinky they perceived their sex to be, to how happy they were in their relationships and what they could change if they wanted to. Some of the more interesting results revealed data about monogamy and non-monogamy in the queer lady community — and in addition to being interesting, I would argue the results are also incredibly important. Monogomy in queer and lesbian relationships seems to be one of those things about which people make all sorts of assumptions and wild claims without relying on any data to back it up; now, though, we can see what it's actually like once and for all.

As Riese from Autostraddle mentions, the media is pretty intently focused on non-monogamy among gay men (although these media representation of these kinds of relationships aren't always positive or accurate); however, it rarely, if ever, shows what non-monogamy looks like for queer women. But thanks to the 8,566 responses Autostraddle got from the survey, we finally have a mostly accurate way to talk about monogamy in the girl-on-girl community.

Here are some of the key findings of the survey:

1. Over half of the women who took the survey were in monogamous relationships...

2. ...While about 15 percent were in some form of a non-monogamous relationship

3. When asked which relationship style they preferred, 22 percent of survey-takers marked "mostly monogamous."

This can mean a variety of things, from open relationships to having threesomes, from being comfortable with letting your partner kiss someone else to letting them have sex with someone else while you're away, or something else entirely. The survey didn't ask participants to explain their flavor of "mostly monogamous," so it's impossible to draw exact conclusions of what that means.

4. Almost 30 percent of non-monogamous people were in long distance relationships with at least one partner.

5. And 62 percent are either "ecstatic" or "happy" with their relationship.

6. The majority of non-monogamous women (43 percent) are "mostly satisfied with their sex life."

8. A whopping 71 percent of non-monogamous survey-takers talked with their partner(s) about sex a few times a week.

9. And 74 percent of of non-monogamous people are interested in kink.

Check out the rest of the details here to learn more facts about non-monogamous relationships and also see what monogamy in queer women looks like.