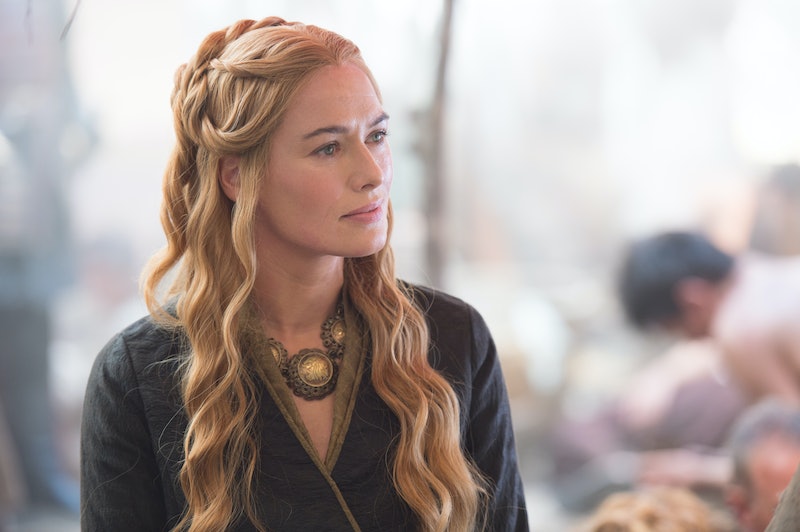 Following the Season 4 deaths of her despotic son King Joffrey and her iron-fisted father Tywin, Cersei Lannister has inherited the title of Game Of Thrones ' chief villain (along with an insane amount of power). With the exception of Roose Bolton and his son Ramsay up in the North, hardly anyone can rival the Queen Mother in terms of sheer villainy. Case in point: just this week she successfully had Margaery Tyrell imprisoned — the biggest (and only) competitor for both her power and her son Tommen's affection. But is Cersei's status as a "villain" really as clear-cut as it seems on the surface? And is the show's version of Cersei Lannister more or less sympathetic than her counterpart on the page?

The second question is easiest to answer: Lena Headey's depiction of the power-hungry queen gives us a far more nuanced and relatable version of the character than ever existed in George R.R. Martin's A Song Of Ice And Fire series. This is chiefly because of perspective: We never get a chapter from Cersei's point-of-view through the first three novels. It's much easier to see her as "evil" when you're only seeing her through the eyes of the Stark girl she's holding captive and the younger brother she hates. Even when the character finally gets her first POV chapters in A Feast For Crows, her inner life is less fully fleshed out than it is sketched in shades of insanity and paranoia.

Just listen to how Cersei's two brothers describe their sister:

"His sister liked to think of herself as Lord Tywin with teats, but she was wrong. Their father had been as relentless and implacable as a glacier, where Cersei was all wildfire, especially when thwarted... She does not lack for wits but she has no judgment, no patience." — Jaime Lannister, A Feast For Crows Chapter 16.

"Cersei is as gentle as King Maegor, as selfless as Aegon the Unworthy, as wise as Mad Aerys. She never forgets a slight, real or imagined. She takes caution for cowardice and dissent for defiance. And she is greedy. Greedy for power, for honour, for love." — Tyrion Lannister, A Dance With Dragons Chapter 22.

It's true that TV-Cersei commits many of the same atrocities as does book-Cersei: having Lancel kill King Robert, having Ser Mandon Moore attempt to kill Tyrion, having the Faith arrest Margaery, etc. But somehow, miraculously, this version of the character has always managed to come off as less evil and more sympathetic. This is thanks to a combination of added scenes by show runners David Benioff & D.B. Weiss and Headey's incredibly layered performance.

Of course Cersei doesn't know how to rule properly: As a woman in this time period, she was never expected to rule and was therefore never taught how. Whereas book-Cersei always seemed to be lashing out at Margaery through pettiness and jealous, it's easier to understand why TV-Cersei is behaving the way she is. Finally finding herself in possession of the power she's always craved following the death of her father, she must move quickly to consolidate her position before it's once again taken away from her by men who think they know better — and a woman as ambitious as she is.

This season, I've found myself growing more sympathetic towards Cersei than ever before, even as she conducts her misguided vendetta against the Tyrells... and it's all thanks to the journey of another character entirely. Last week's episode featured one of Thrones' most controversial moments to date, when Sansa was raped by her new husband Ramsay on their wedding night. But the entire storyline of Sansa's betrothal to the bastard of Bolton has illuminated some interesting parallels between the eldest surviving Stark and her former captor — parallels that don't necessarily exist in the book since Sansa's storyline is completely different on the page.

Both Sansa and Cersei were forced into arranged marriages with men they had no love for in the name of political strategy. Both were raped by their husbands. (It's clear from Cersei's recounting of her sexual encounters with Robert to Ned in Season 1 that they were far from consensual.) And both used the power granted to them by their unwanted marriages to exact revenge upon their enemies. (At least, we assume this is where TV-Sansa's storyline is headed.)

There are two major differences between Sansa and Cersei's stories that color our perceptions of them. The first is that we've watched Sansa slowly grow and develop over the course of five seasons, whereas we were introduced to Cersei fully-formed in Season 1. The second is that it's easier to cheer Sansa on because we also hate the people she hates (the Boltons), whereas we rather like the people Cersei considers her enemies (the Tyrells).

It's easy to see how the violent, patriarchal society of Westeros can bend a strong-willed woman into a figure as bitter as Cersei. You do whatever you have to in order to gain a modicum of power, and then you jealously guard that power with every tool available to you, destroying whoever threatens you and those you love. Sansa's arc since the beginning of the series has been like watching Cersei's origin story unfold in slow motion — and picturing the Queen Mother as wide-eyed and naïve in the past as Sansa was five years ago makes it much easier to empathize with her actions in the present.