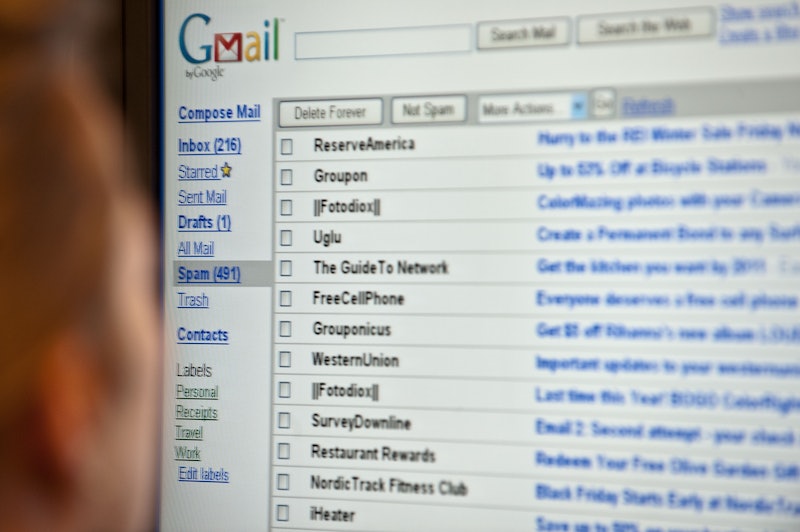 If you've ever wondered why your male boss took forever to respond to your last email or why your female co-worker can't seem to send an email that isn't three paragraphs long, science may have uncovered the answer for you: A new study of emails from Yahoo! found that men and women email differently. It's no secret that men and women have vastly different communication styles, but it turns that those differences pop up in our virtual communication just as frequently as they do face-to-face.

Despite how often we email and how it's become the go-to method of communication in work environments, the researchers acknowledged that we don't actually know a whole lot about email behavior. "While email accounts for a considerable portion of interpersonal communication, emailing behavior is not well understood," the study's authors wrote in their report.

The study analyzed over 16 billion — yes, billion — emails sent by over two million people, making it the largest email study that's ever been conducted to date. The researchers tracked the participants emails for several months and kept data on the subject lines of the emails, the times they were sent at, their length, the inclusion of attachments, and the ages and genders of the recipients. A study of this size produced results that were also large in scope and numbers, so here are the top five takeaways:

Generally, the younger you are, the more likely you are not only to respond to emails quickly, but also to keep your responses brief. Teenagers respond to emails in 13 minutes on average, while those over the age of 51 take 47 minutes to reply. Young people also respond to more emails than their older counterparts.

Not only does age influence how you email, but it turns out that your gender does as well. Men reply to emails with more speed and fewer words than women do, with their response time being an average of 28 minutes and their median word count being 28 words per email. However, women's emails have a median word count of 30 words and an average response time of 24 minutes, making us faster with our responses, but with more text ti sift through.

3. You Email Fastest From Your Phone

The fastest emails sent in this study came from mobile devices, which also tend to be the shortest. Email replies that are sent from smartphones had an average word count of 20 — only one third of the length of the average email sent from a desktop, which had a median of 60 words. Emails from desktops also had the longest response time, while tablets came in second place. This doesn't surprise me, since I usually save the emails that will require a longer, more thought-out reply for when I'm on my laptop versus the quick replies I send on my iPhone.

4. If You're Being Overwhelmed With Email, You'll Reply to Less of Them

The researchers looked at how email overload affected users response time and length, to see if it changed when they received more emails.They found that receiving more email led participants to spend more time in their inbox, but they kept their responses a lot more brief and responded to a smaller portion of their emails than they did before.

5. In an Email Chain, You'll Synchronize Your Responses

The researchers looked at the synchronization of email replies within threads and what they found was that people's responses became more similar in length and response time up until the middle of the thread, when they became increasingly dissimilar. I'm guessing this is because of not wanting to appear that you're not engaged or paying attention to the thread and following the lead of others, but then not wanting to appear to overly available by responding to a chain every five minutes. Believe me, I've had some experience with this.